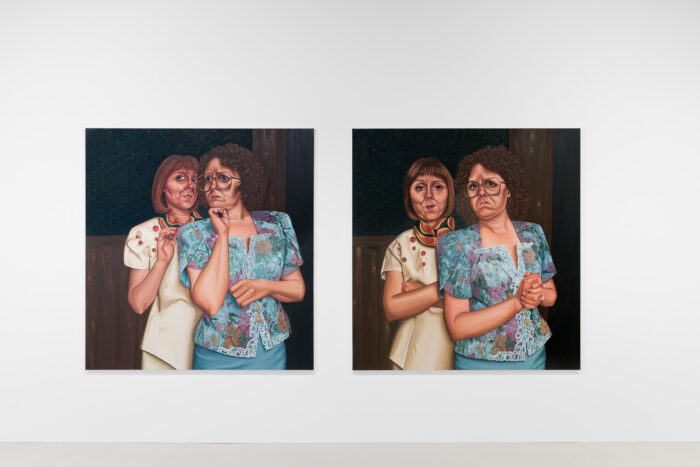 The first act in Pfull’s practice is peculiar. She ages herself with makeup, puts on wigs and dresses up as the characters she wants to reproduce, namely 1980s suburban housewives. Mimicking particular expressions, idiosyncrasies and postures, she feeds the documentation into smoothly surfaced paintings. Describing the process she says:

I think I have similar impulses to writers and actors, of making up stories and involving myself in a character’s life. I am fascinated with performance and mannerisms which can provide a whole backstory to the person they portray.

Like most subjects whose importance has been emphasised through portraiture, Pfull gives her women a sense of prestige by painting them. This is further heightened by the ‘dual portraits’ where she creates the same scene twice but with only a minor variation. The portraits set themselves against today’s fast-paced Digital Age that is characterised by an onslaught of images and information. Clad in outdated frocks and firm in their unyielding stances, her characters materialise a type of resistance and in return, with this same unhurried attitude she asks us to consider them.

She Wrote a Book I

She Wrote a Book II