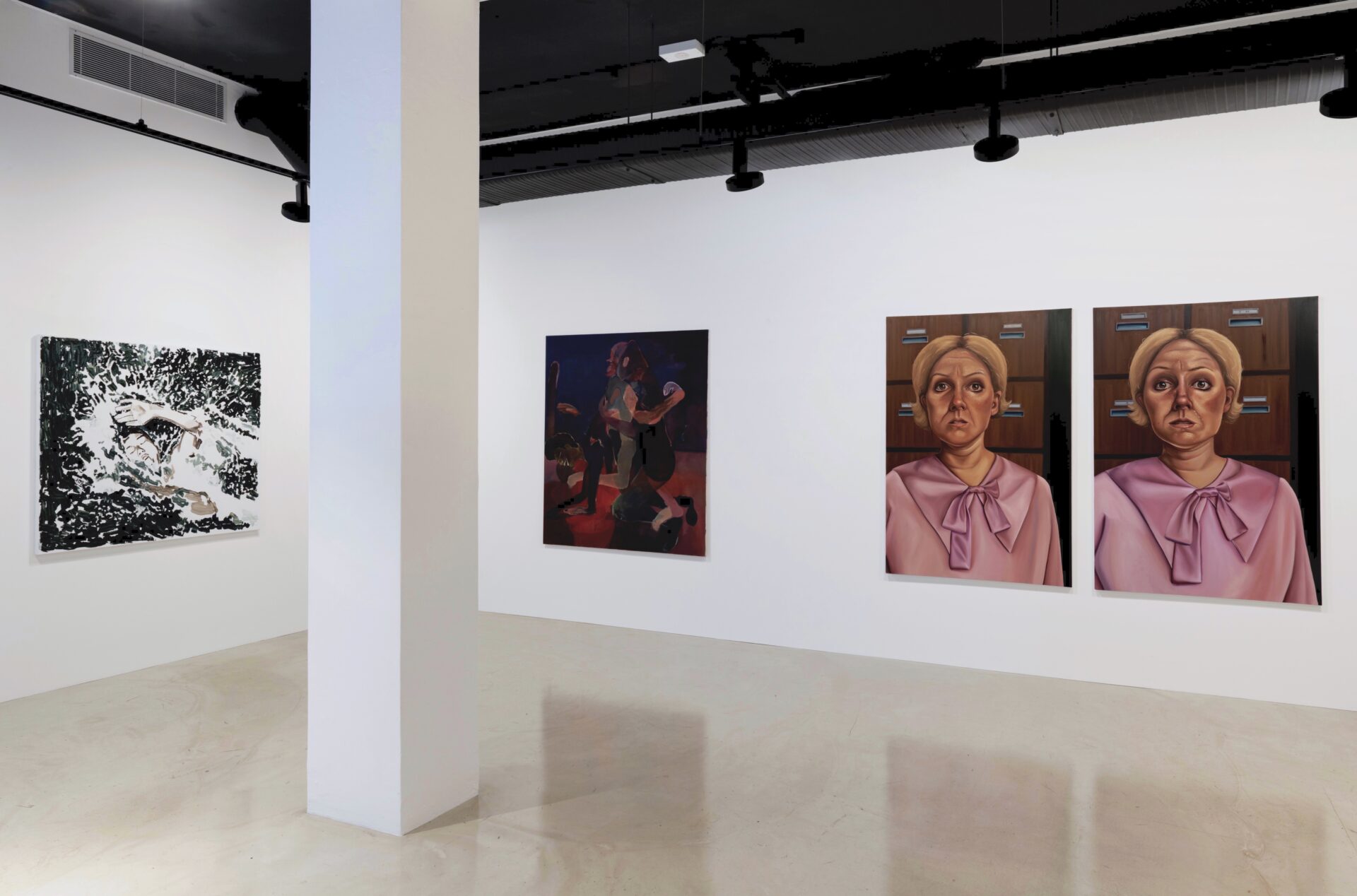 Painless After All I Lie

“i love you about this much"

“i got lotsa problems, but mostly i eat too much and a i drink too much”

Forever and Ever (detail)

b. 1985 in Sydney, Australia
Lives and works in the Southern Highlands of NSW

Clara Adolph’s work is based on a paradox. Painting as a medium always suggests the here and the now. Adolph’s work, with its gestures of thick paint and graphic strength, feel as if they have just been taken off the studio easel. Even here in the gallery the paintings feel almost as if they are in the process of coalescing on the canvas and foreground their presentness.

The images in Adolphs’ work in contrast are based on collected photographic images of ski resorts, family holidays and summer pools. They represent a past that seems a little more innocent and more elegant of simple pleasures. It seems a lost time.

Yet by painting these images Adolphs is able to bring this past strikingly into our own lives. The nostalgic atmosphere in the work now becomes one of vitality and immediacy. The images almost become heroic. A holiday snap of friends in oil paint becomes connected to the portrait genre; the ski slope becomes a landscape genre painting; the selfie returns again to self-portrait. Through mannered colour and carefully chosen com- positions the images are made more controlled and complete.

At the same time, the sketchiness and expressive stroke of the work makes you feel that the painting is still not quite complete. In many of the works, the white canvas shows through as if we have caught the work halfway or as if we have to complete the image somehow in our own mind’s eye. The work then embodies a contradiction. It represents in equal measure a response to the past and insistence on the present. As a viewer, we oscillate with a buzz between the two.

Clara Adolphs completed her Bachelor Degree in Fine Arts at the University of New South Wales in 2008. Since then she has held solo exhibitions throughout Australia. She has been a finalist in the Archibald Prize, the Sulman Prize, the Mosman Art Prize and the Brett Whiteley Travelling Scholarship. In 2017 she was awarded the Eva Breuer Traveling Art Scholarship through the Art Gallery of New South Wales as well as the Mosman Art Prize Young Emerging Artist Award. In 2019 she presented a major solo exhibition at Goulburn Regional gallery. Adolphs is represented by Chalk Horse, Sydney and Hugo Michell, Adelaide.

b. 1983 in Vancouver, Canada
Lives and works in Vienna, Austria

Daniel Domig studied Painting at the Academy of Fine Arts, Vienna, Austria, where he currently lives with his family. He has exhibited widely in both Europe and North America over the past two decades and most recently in Sydney, Australia with Chalk Horse. Among his solo and group shows: Where Hopes Infest, at Diana Lowenstein Gallery, Miami, The Quiet Afterword, Museum Engen, Germany; Matter of a Burning Body, unttld contemporary, Vienna, Austria; The Heart is a Prideful Beast, Warburton Gallery, Edinburgh, Scotland; All Words Were Once Animals, 33 Orchard, NEW YORK, NYC (solo); Five Rooms, Austrian Cultural Forum NYC; Triennale LINZ 1.0, Lentos Kunstmuseum, Linz, Austria; With All the Things We Build and Make, Thrust Projects, New York; Lebt und Arbeitet in Wien III at Kunsthalle Wien, Vienna; BeastBodyBreathing at Gallery Winiarzy.

The first act in Pfull’s practice is peculiar. She ages herself with makeup, puts on wigs and dresses up as the characters she wants to reproduce, namely 1970’s – 1980s women. Mimicking particular expressions, idiosyncrasies and postures, she feeds the documentation into smoothly surfaced paintings. Describing the process she says:

I think I have similar impulses to writers and actors, of making up stories and involving myself in a character’s life. I am fascinated with performance and mannerisms which can provide a whole backstory to the person they portray.

Like most subjects whose importance has been emphasised through portraiture, Pfull gives her women a sense of prestige by painting them. This is further heightened by the ‘dual portraits’ where she creates the same scene twice but with only a minor variation. The portraits set themselves against today’s fast-paced Digital Age that is characterised by an onslaught of images and information. Clad in outdated frocks and firm in their unyielding stances, her characters materialise a type of resistance and in return, with this same unhurried attitude she asks us to consider them.

b. 1989, Sydney, Australia
Lives and works in Melbourne, Australia

Phu studied at COFA, Sydney graduating with honours in 2011 and also studied at NSCAD, Nova Scotia. Phu’s work has been informed by several China-based residencies at CAFA, Beijing; DAC Studios, Chongqing; and Organhaus, Chongqing. He has had numerous solo exhibitions in Australia including Westspace, Melbourne; CCAS Gorman Arts Centre, Canberra; and ALASKA Projects, Sydney; ACE Open, Adelaide. Last year (2018) he showed in the Dobell Drawing Biennale at the Art Gallery of New South Wales, The Burrangong Affray at the 4A Centre for Contemporary Asian Art and Primavera 2018 at the Museum of Contemporary Art, Sydney. This year Phu was the recipient of the $80,000 Mordant Family Moving Image Award (AMCI). He is currently presenting work in a group show titled ‘The Way We Eat’ at The Art Gallery of New South Wales. Phu is represented by Chalk Horse, Sydney and Station Gallery, Melbourne

Trent Whitehead’s paintings and sculptures are like totems. There is image magic in them and they appear more like effigies than art. They have the intensity of outsider art with rhythmic obsessive marks and strange morphing characteristics.

Whiteheads sculptures particularly — part vase, part mask — feel like votive artefacts of a church, but not a church of organized religion. This is the new spirituality uncoupled from social construction and centred more on a direct relationship between you and your own mystical feelings. The portraits and sculptures become a friend or fellow traveller. They are like slightly skewwhiff clowns that no doubt whisper truths into your ear or on a bad day perhaps needle your anxieties. Whiteheads works instead promise more than art. They are your friend and per- haps even protector. At the very least they are the perfect house god for urban tribes.

Whitehead has presented solo exhibitions in Sydney at Chalk Horse, Sydney China Heights and Monster Children. He has also exhibited extensively in Melbourne. His work has been commissioned by City of Sydney and MTV Headquarters Sydney. Whitehead is represented by Chalk Horse, Sydney.