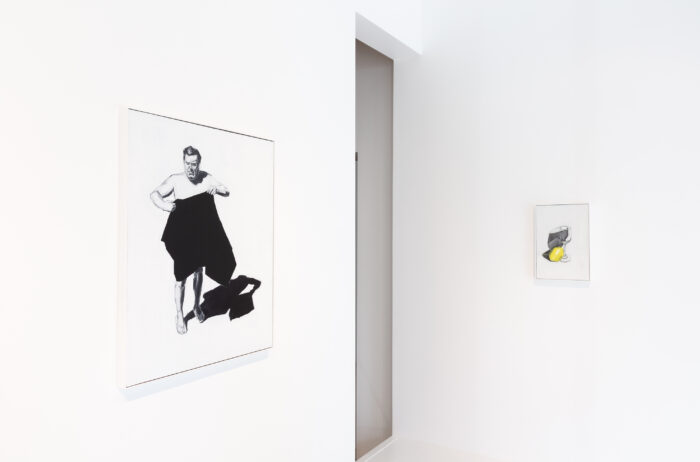 Dean Brown is a Sydney based painter and printmaker known for his formal rendering of figures and objects that contain a characteristic stillness and speak to moments in time.

In Brown’s paintings, there are two central components: the form and its shadow. Like a sundial, the shadow is cast onto vacant space and endows presence and drama onto the subject, creating a noir-like theatricality unique to still life painting.

Brown’s works are bold but they realise time in a way that is steady and quiet. Every angle is regarded, each striking colour (when colour appears) is carefully selected, and the body parts are fitted together like pieces to an anatomical puzzle. Shrouded in stillness and anonymity Browns paintings contain both a familiar and enigmatic quality. His highlighted silhouettes seem to be having an existential encounter with the nothingness that surrounds them compelling us to speculate on who they are and where they are going. The still life’s depicting glasses, bowls, and fruits enveloped in rich vibrant hues set against a seemingly paired-back background evoke a similar kind of intrigue in the everyday. But while the works are meditatively formulated, diffusing calmness and tranquillity, they also exude dynamism. The aluminium surface emboldens the fluidity of each mark allowing it to swiftly glide over the smooth plain without interruption. The artist’s defined use of line accentuates the geometry of each object.

With his patient eye and laboured handwork rendering humble everyday pursuits, objects, and commutes, Brown points to the stoic grace in the act of living day-to-day. By pausing on simple occasions he shows us life does not need to be extraordinary to have meaning, each second is serene and every action has weight.

Brown has completed a Bachelor of Fine Arts Honours at the National Art School. He also holds a Diploma of Design, TAFE, Sydney, and from 2000-07 studied Classical drawing and painting at the Julian Ashton Art School Sydney. Brown’s work has been included in solo and group exhibitions in Australia and internationally. He has been a finalist in the Archibald Prize, Australian Print Triennial Prize, Fremantle Arts Centre Print Award, Mosman Art Prize and the Burnie Print Prize. He was awarded the Storrier Onslow National Art School Paris Studio Residency at Cite International des Arts, Paris in 2011.

Back to the future

When the tide goes out

Why Can’t We Be Friends

All the good men are taken

Back to work again

Down on his luck