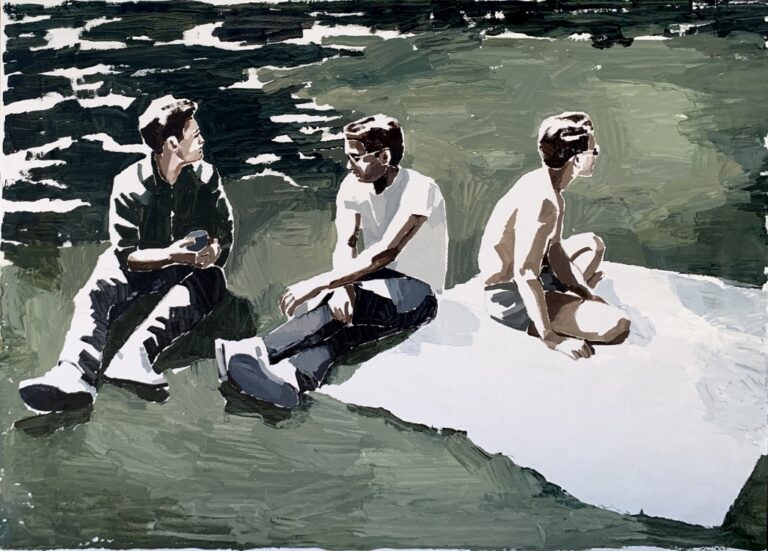 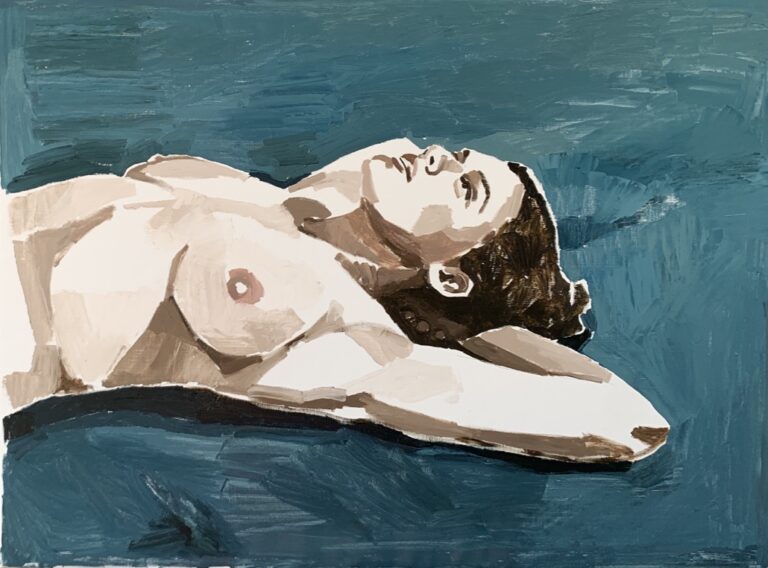 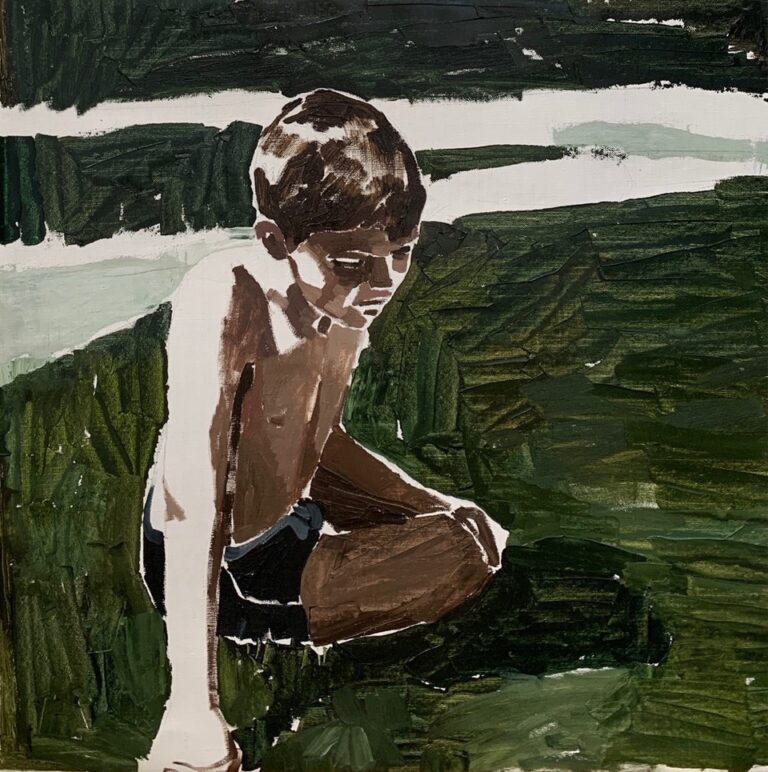 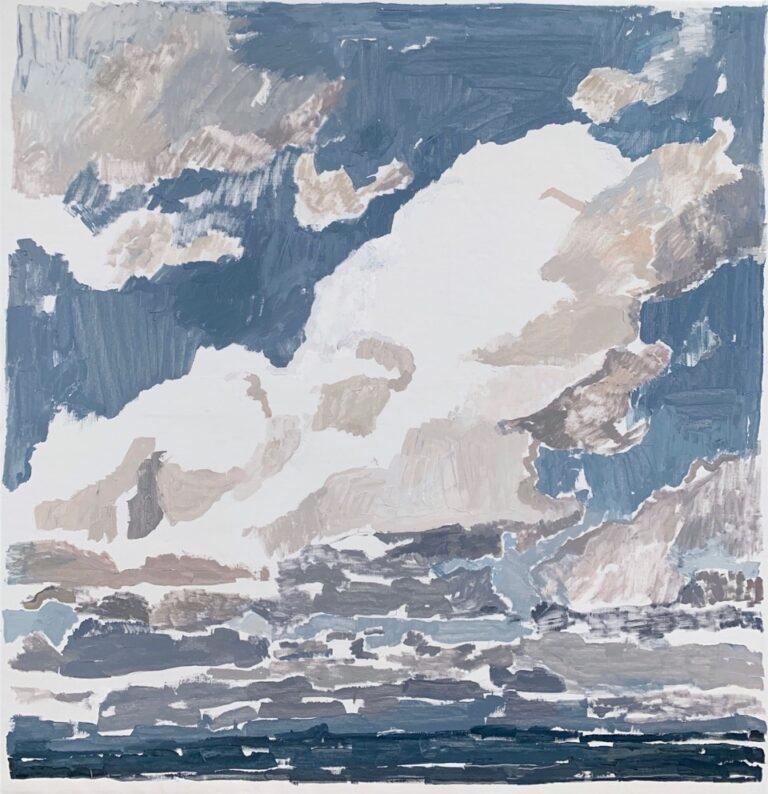 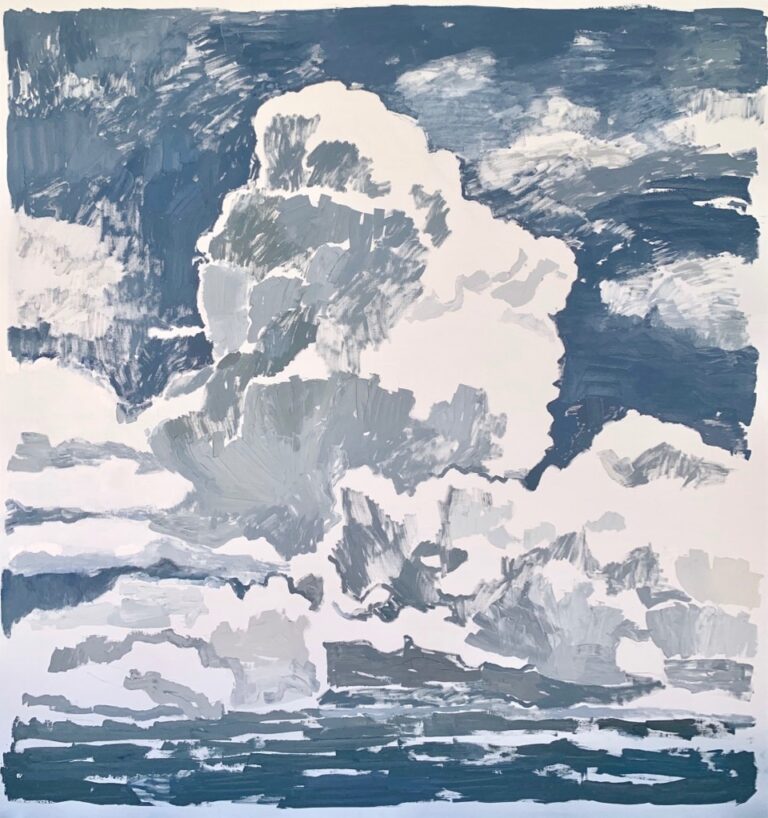 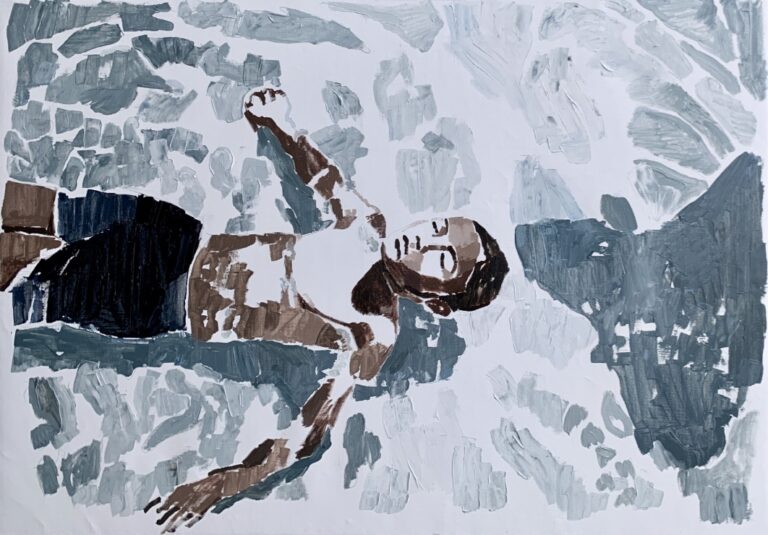 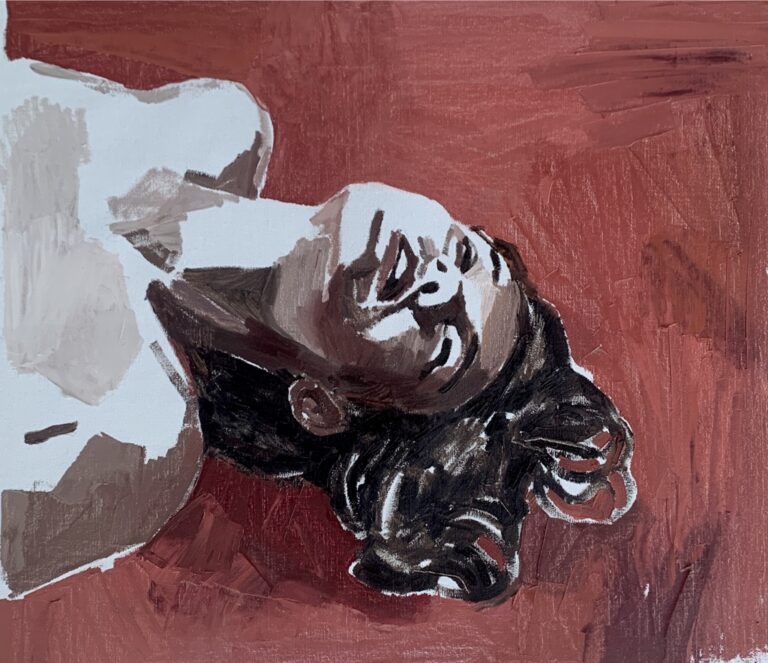 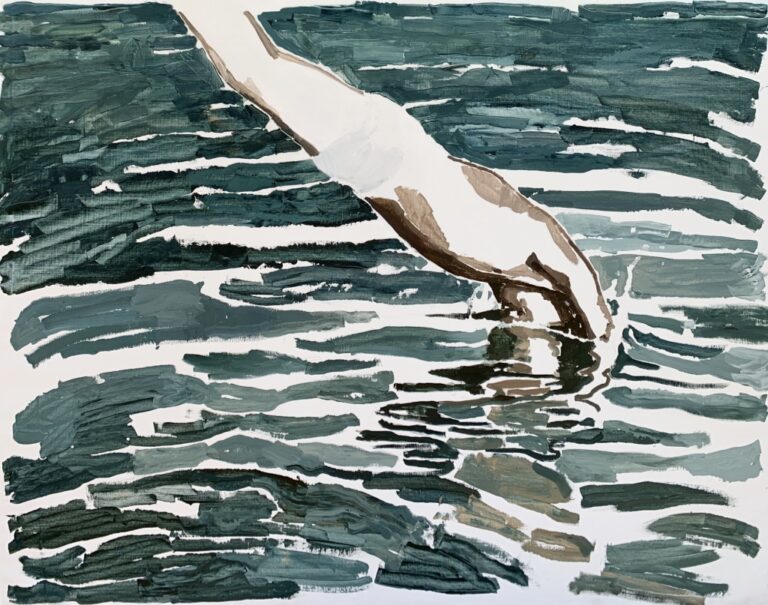 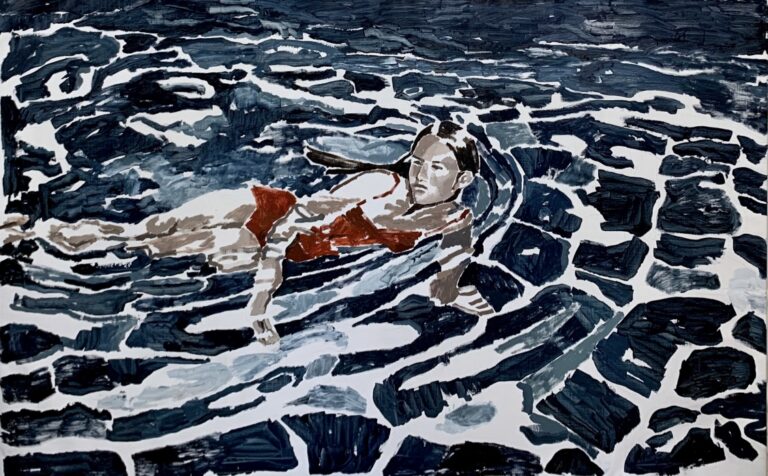 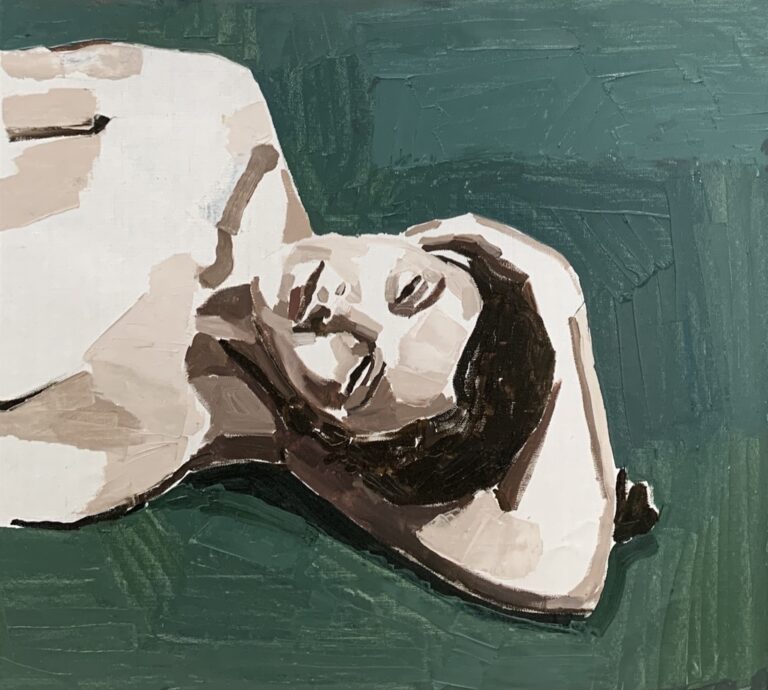 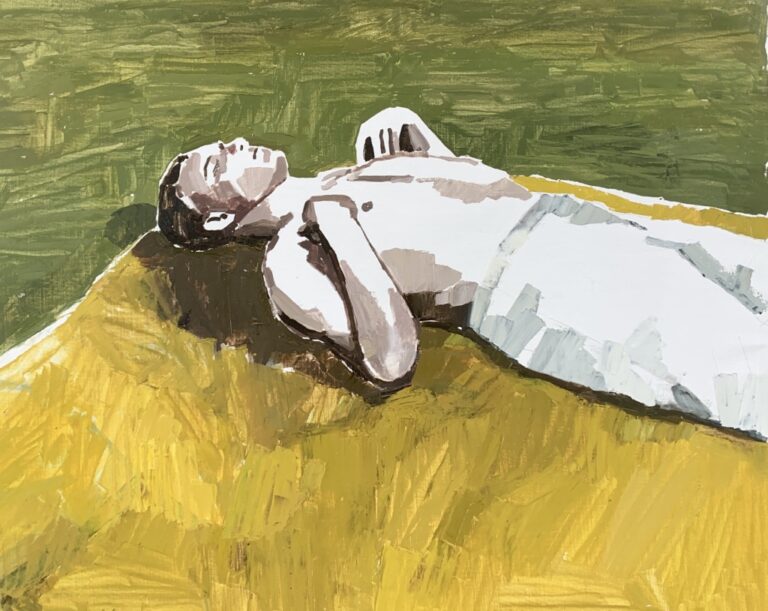 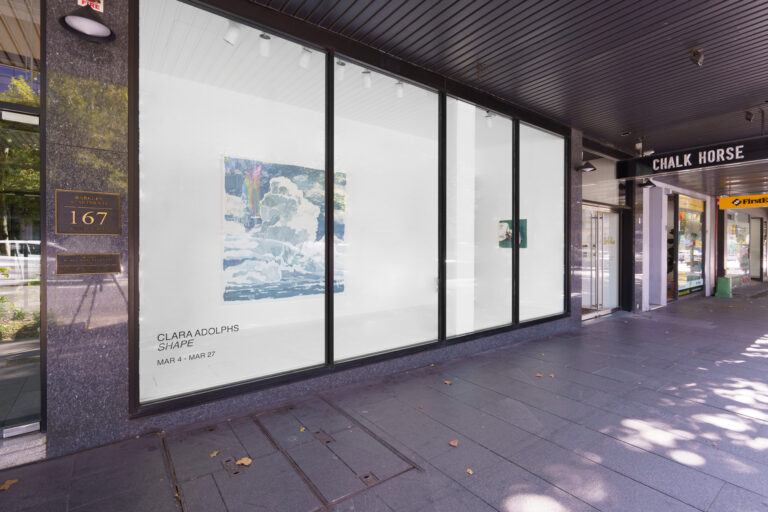 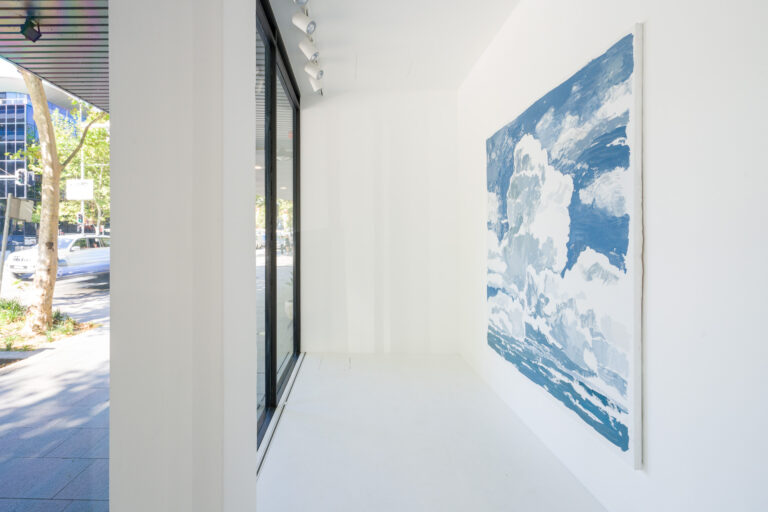 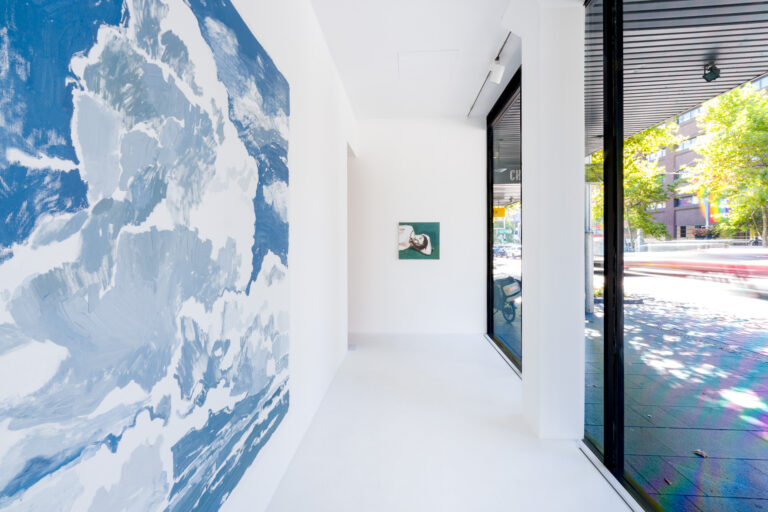 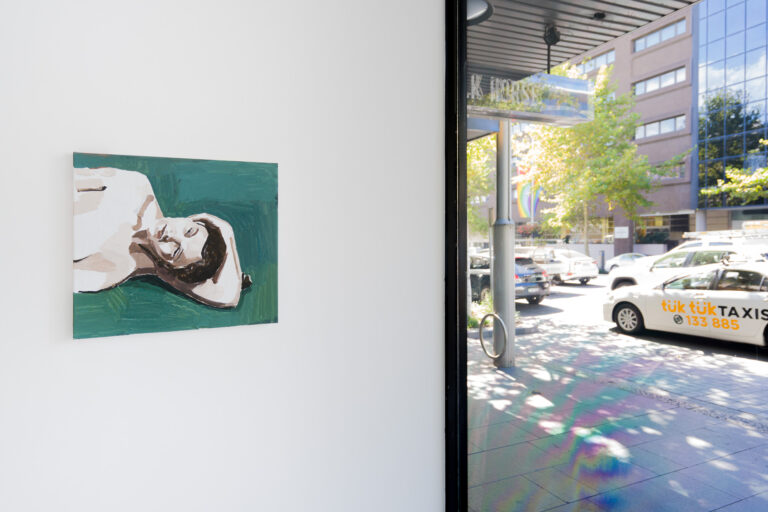 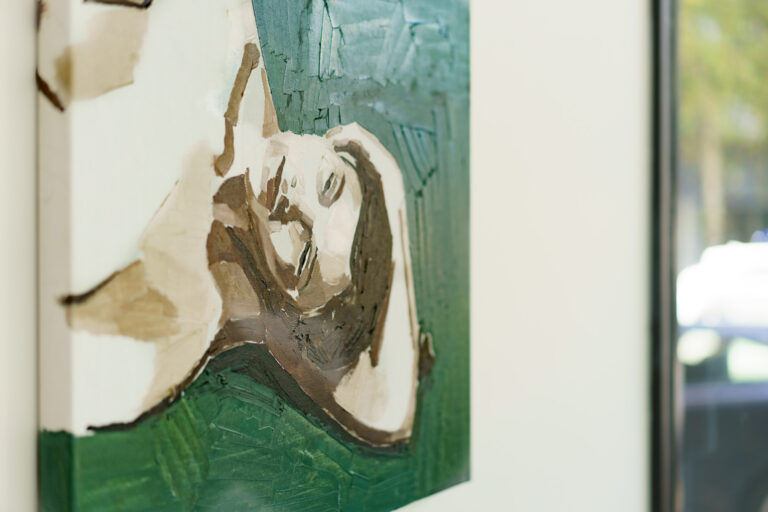 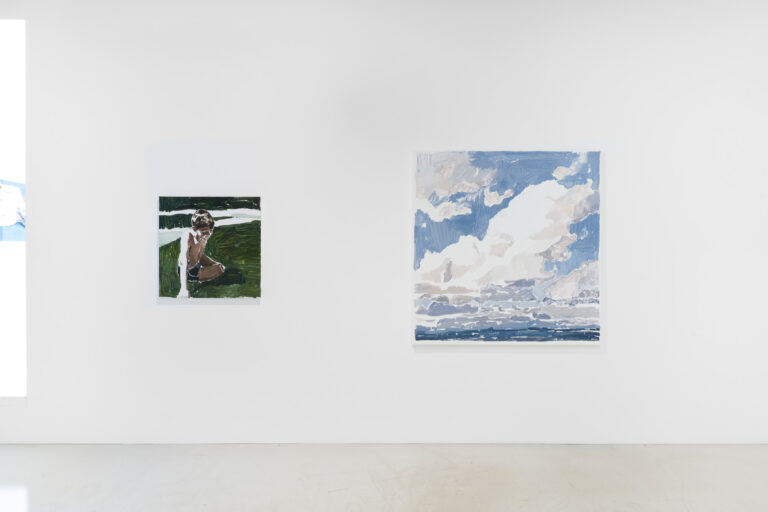 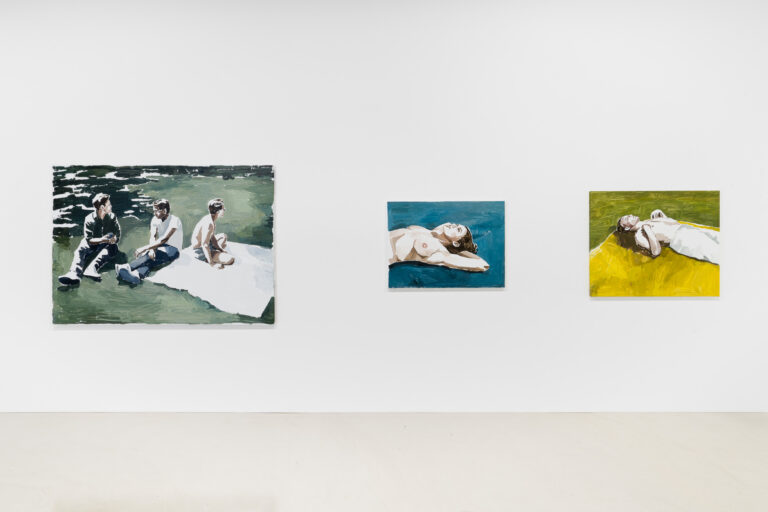 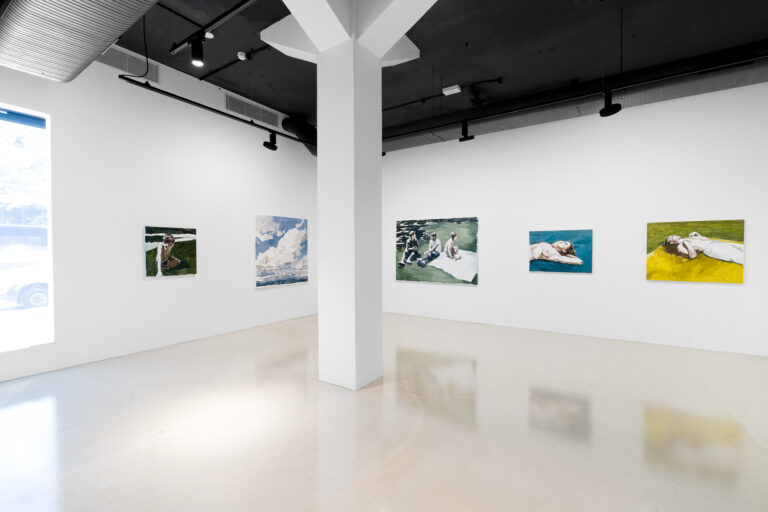 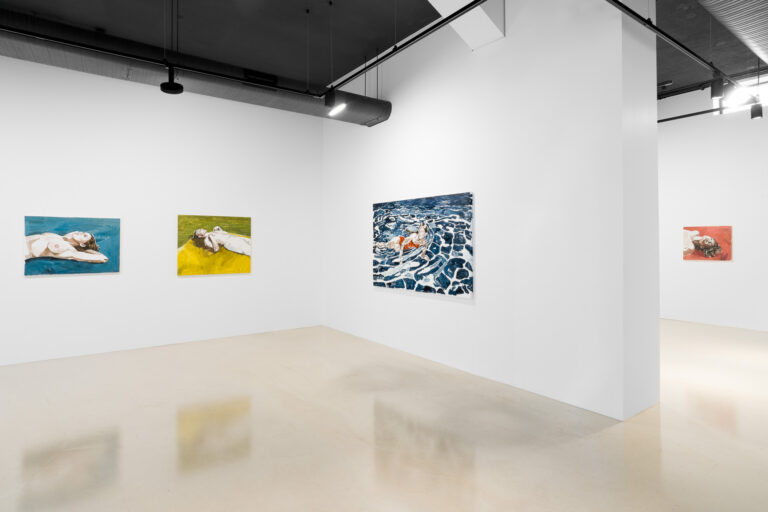 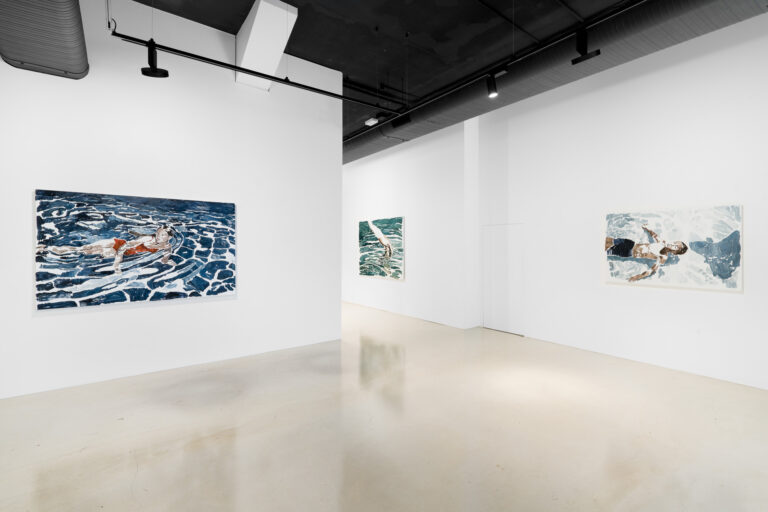 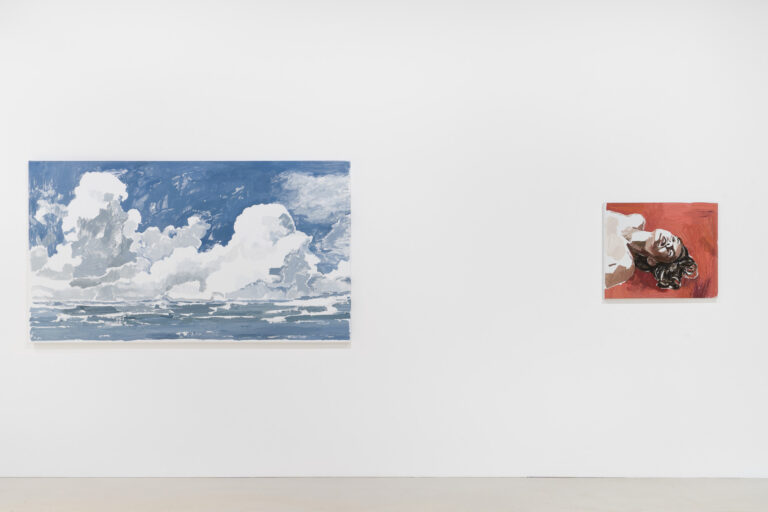 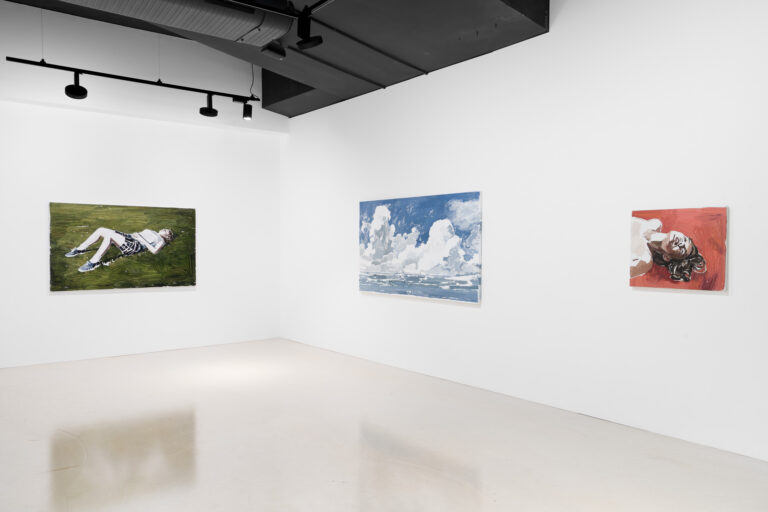 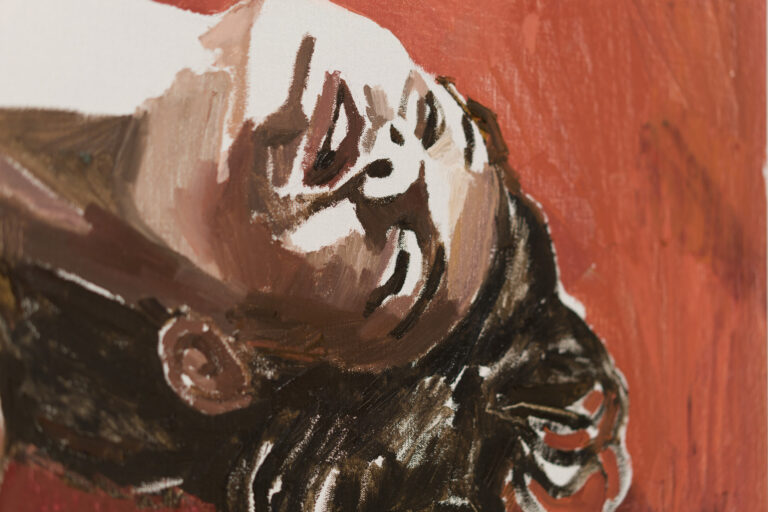 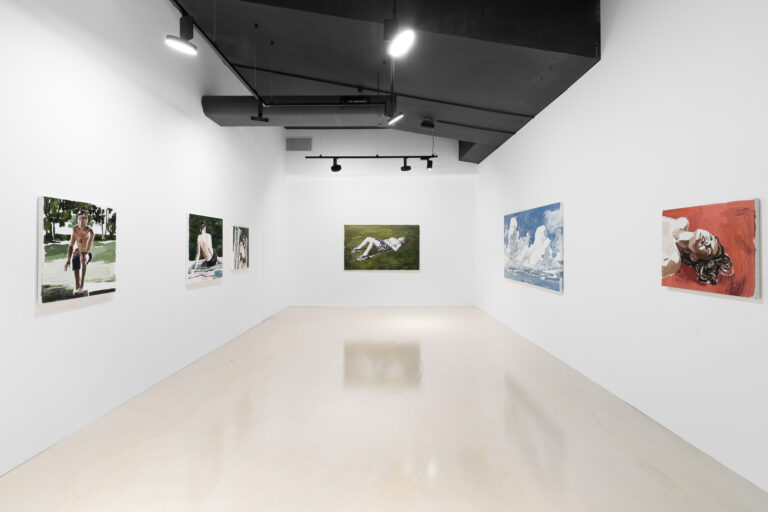 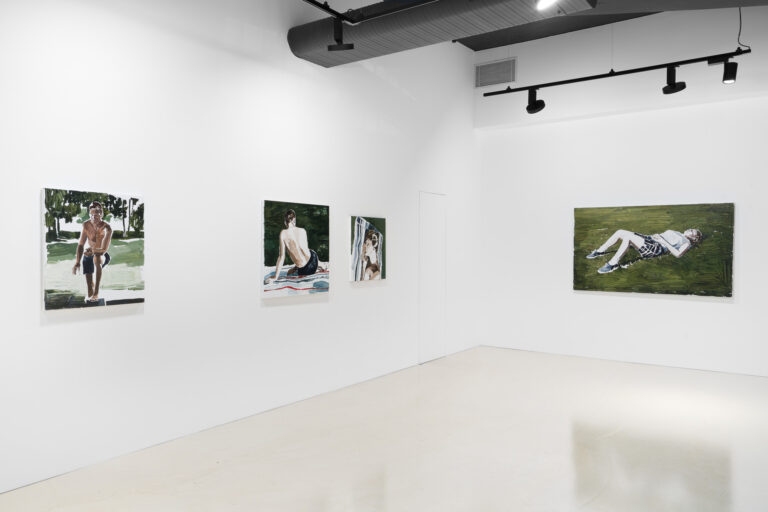 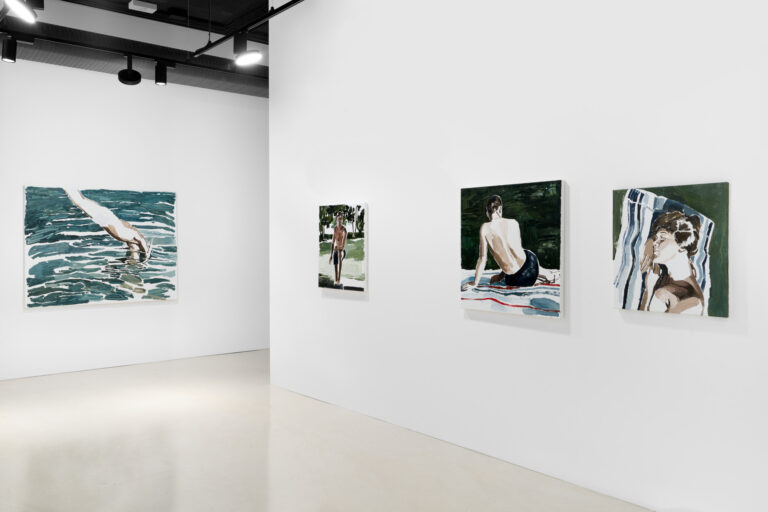 How often do you find yourself just lying on the earth, gazing up? In that stillness, cloud formations track overhead. Clouds, which might otherwise form a static backdrop to daily activity, bloom, gather, disperse, recede, pass by. Their transience is revealed through the anchoring of oneself in place.

Where recent exhibitions have seen Clara Adolphs focus on large paintings of water teeming with dynamism, the works in Shape indicate a shift towards tranquility, with a more subtle form of movement present within the calm. With their subjects taken from found photography and recently captured images, these works suggest a paradox. Painted quickly and spontaneously they nonetheless suggest a pause, a contemplative moment in time. Painting ‘in the moment’ with speed and confidence comes at a cost – Adolphs deems a small number of her completed paintings a success, with many works discarded. What remains is a distillation of this energy.

The mid-20th century found photographs that inform many of these compositions have a flatness and lack of detail which opens up interpretative possibilities for Adolphs and, in turn, the viewer. Anonymous figures and nondescript scenes lacking in colour and context, are brushed into the present – an understated regeneration. In paintings of figures, deep green or earthy red has been pushed into every corner of the canvas, while faded blue and grey brushstrokes invite cloud formations into being.

Etymologically and technically, photography is ‘drawing with light’. This context extends into Adolphs’ photography-inspired paintings, with light playing a central role in the artist’s approach to line and shape. The white of the primed canvas is actively incorporated, painted around in order to be brought forward, slicing through ripples of dark water and glowing from within fluffy cumulus. It drapes the forms of the figures who inhabit these paintings, their limbs basking in the sun.

Adolphs’ figures are almost all solitary, occupying their compositions alone in pensive stillness. Some lie on the earth, and we imagine their gazes tracking the cloud formations captured in other paintings. In Between Friends three figures sit in close company but each look in different directions. They form the boundaries of a comfortable type of silence that can dwell between those who know each other well. Or perhaps their disparate gazes suggest an emotional distance present in social proximity.

This exhibition is built around a combination of timeless images that, taken together, suggest a mood rather than specify a narrative. Adolphs’ pared back approach to painting creates openness and possibility in each work’s surface. Permeated by air and light, these paintings are an expression of the pulsing life that exists within even the quietest of moments.