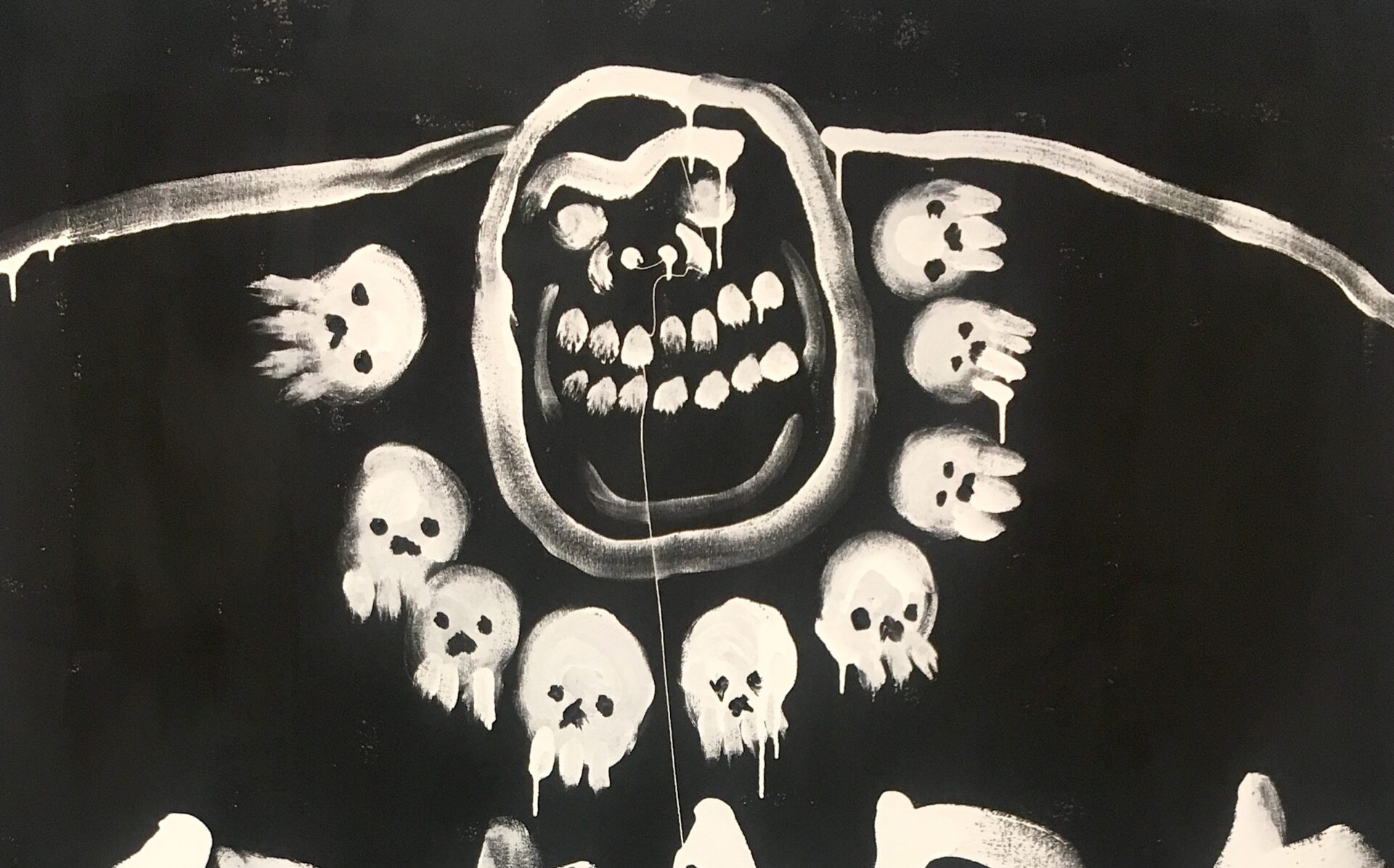 The group show Doom brings together the work of Nathan Hawkes, Harry McAlpine, Kate Mitchell, Jason Phu and Alexandra Standen. The term doom derives from the old English Dom and refers to judgement and condemnation. Together, the works in the show examine notions of ‘doom’ throughout the ages.

On entering the room, the exhibit is enveloped by the glow of neon light emitted from Kate Mitchell’s work A Light Sentence, 2014. The work is a perfect starting point and offers up the artist’s usual conceptual rigour and comedic underpinning, while also speaking to law and judgement. Mitchell often uses objects and sculptures to un-pack the absurdity of everyday life. The play on words and the ‘sentence fragment’ leaves the viewer a little unsure of Mitchell’s intention. It speaks to a similar approach to the material as Bruce Nauman.

This neon sits in conversation alongside a large scale drawing by Nathan Hawkes titled There will come soft rains, 2018. The drawing possesses a technical prowess that continues to open up the more time spent with it. The surface is scarred with abrasion and is contrasted by a powdery beauty that comes with Hawkes handle of dry pastel. The scratched paper is rubbed into with pastel to reveal a dark figure blanketed and sitting alone. Pre-Renaissance ‘doom paintings’ of the medieval church were often used as a means of guiding behaviour. The paintings depict the Last Judgment when God determines if souls reach Heaven or Hell. The most famous of dooms is Michelango’s The Last Judgement, 1537-1541 in the Sistine Chapel. The title of Nathan Hawkes’ drawing There will come soft rains however refers to a poem of the same name written by Sara Teasdale during World War I. The poem speaks to a post-war, downfall of humanity with the natural world continuing with little or no acknowledgement of change.

… Not one would mind, neither bird nor tree

And Spring herself, when she woke at dawn,

Would scarcely know that we were gone.

Harry McAlpine’s work titled Post-Internet Plague Doctor, 2021 is a more literal interpretation of ‘doom’. This charcoal render is created from a performative staging and photographic documentation. It’s mastery and subject matter bring to mind the mushroom cloud drawings of American artist Robert Longo. The figure is cloaked in a plastic poncho and has a petrol funnel tethered to the face while viewing the post-apocalyptic world through VR googles. The lo-fi materiality of costume is elevated by the meticulous hand of the artist. Plague doctor’s are traditionally adorned in glass lensed mask with beaked nose often containing dried roses to aid with the stench. McAlpine’s Doctor maintains a barrier through his makeshift hazmat suit and his string of plastic roses is reminiscent of a voodoo necklace. Voodoo amulets were believed to protect their wearer from evil.

Jason Phu often combines Chinese mythology with a grunge sensibility in a deft exploration of his cultural heritage. Story telling and dissemination are key to Phu’s approach to mark making. The white on black has a direct correlation with Chinese stone rubbings, calligraphy and the multiple as a means of popularising stories. Phu’s painting “i came here to eat your tiny skull” tells the story of a heavenly warrior, Sha Wujing or Sandy, from the 16th century Novel Journey to the West by Wu Cheng’en. The character Wujing was banished from Heaven after being struck 800 times with a rod. He is then reincarnated as a man-eating sand demon. Sandy encounters a group of 9 monks who he eats and disposes of their bodies in the river. He strings their skulls on a rope and wears them as a necklace. The character was later popularised by the television series Monkey (1978).

Ceramic vessels and clay have a rich and varied symbolism. Clay jars were used as containers for ancient parchment scrolls and to preserve stories over time, and many different cultures recorded their stories directly on the surfaces of clay. Alexandra Standen’s sculptures often speak to fragility and the precarious despite how well constructed they are. The sculptures have a proficiency shown through surface and wall thickness and they often seem to defy gravity in the way they bend out and curve in. Her surfaces fluctuate between raw terracotta, pearlescent lustre, rich gloss blacks and powdery matte. The artist recently spent time in the desert of which the vastness and topography is something mirrored in the undulating hand pinched surfaces. There is a dark and mesmerising abyss the viewer can be lost in. The Potters of Firsk (1950) by Jack Vance is a science fiction short story of potters of the planet Firsk. These potters are the native population of the planet and are a mysterious group who live in the mountains and use the lime from bones of ancestors as well as the living to make their glazes. The rich and sometimes reflective glazes are of particular note in the story. Standen is obviously working with a less sinister eminence reached through vigorous experimentation.

The staging of these works has a strong presence of eerie gloom but in many moments we can feel the importance of story telling and how personal these practices are. We can find hints of absurdity as well as poetic beauty in the darkness.

"i came here to eat your tiny skull"

There will come soft rains