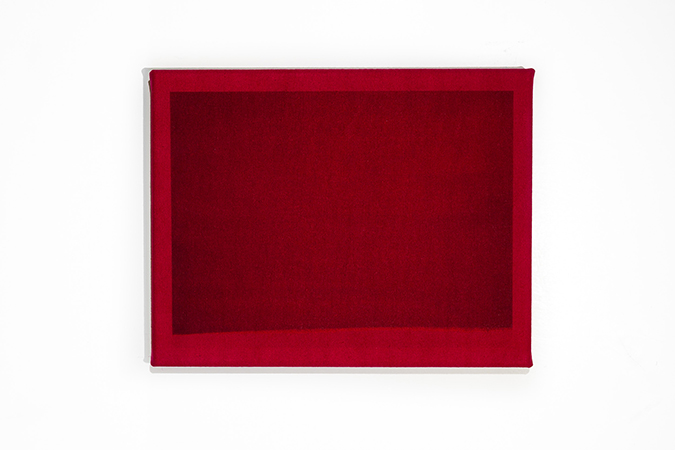 First we see masses of colour, rectangles, right angles, thin lines … and of course the repetition, from one painting to the next, of a technique, a general obsession. The series resembles a study in colour, a minimalist exploration, but the aesthetic interest that drives Mathew McWilliams is also passionate, in the tradition of the abstract-expressionists Josef Albers, Morris Louis, Ad Reinhardt or—to mention an artist McWilliams has an affinity with— Blinky Palermo.

The artist uses paintbrush and canvas, and on the surface the process involved here seems rather classical. But McWilliams’s work is always a knot of techniques, a layering of mediums. The ink he uses is from a colour inkjet printer—the cyan, magenta, yellow, black (CMYK) so familiar to us. The brush is literary soaked, not dipped, and the ink—sometimes mixed, sometimes left pure—is released into the fabric rather than applied in any traditional way. Depending on the amount of ink seeping through the canvas, a fringe sometimes appears along the straight lines. Painting here is as much a process of dyeing, with the inevitable hazards this process involves. McWilliams started using dye techniques in 2017 during the several months he spent in the Italian town of Fabriano (Europe’s most important paper producer in the Middle Ages), exploring the art of papermaking and creating his flat paper quasi-sculptures dyed with inkjet-printer ink (Fabriano Collage, 2017). The ink and the dyeing prove very efficient here—the masses of colour are full, saturated, bold.

Another technique is present beneath all this. McWilliams is an artisan. Each piece is not only a “painting and dyeing” exercise, it is also a photograph. After McWilliams has painted the thick inkjet lines into the material, he photographs the canvas. He then prints this photograph back onto the canvas. Thus the subject that has been photographed becomes the material support of the printed photo. This explains the difference in intensity of colour: The original colour is usually vibrant, the printed photo more faint. A third depth in colour can appear, the result of the superimposition of the first two. There is a playful dimension to the work here: Pick a piece from the series, identify the two versions of the same colour, of the same shapes, and then see the two steps in the process of the work—the vibrant ink piece and the more faint photo version. The reproduced image has been printed at around 70%, centered on the canvas, and McWilliams uses the large margins around the printed photo to fold the canvas around the frame. These parts of the original canvas are lost to the viewer, but you can still “see” them reproduced on the printed photo.

What is it we are seeing? McWilliams used a similar layered technique with his Paper Works (2008 – 2010) series: a large piece of thick paper is crumpled up and photographed, and then McWilliams proceeds to print the image thus obtained on the same piece of paper once it had been flattened again. The effect is ghostly—on the surface of a rugged sheet of paper, a more voluminous, more sculptural past version of itself is apparent. The same interest in the overlap of past and present is explored in his 2009 Roman Head series (images of Roman-head sculptures deconstructed as dots) and the vintage posters of French monuments into which McWilliams inserted a three dimensional hole (Area, 2019). McWilliams’s intention—like so many artists, from the Italian Renaissance painters of Antique ruins to Chris Marker and his use of the ringed tree trunk in La Jetée—is to make us see Time. Not feel, not imagine, not understand, but truly see.

Layer 1: the painting with inkjet-printer ink. Layer 2: the photo printed at 70% over part of the original model. Layer 3: the folding of the canvas around the frame. This last step makes the exploration of colour almost three dimensional—like a sculpture by Anne Truitt. When McWilliams folds the canvas, he deliberately hides the original, makes its full surface inaccessible to the viewer’s gaze. The original is now wrapped around the wooden frame—thus giving each painting a sculptural dimension. Unlike ordinary paintings, where the frame is merely the wooden structure onto which the canvas is stretched, the framing here is the act by which the original escapes.

Now we look at a piece again and realize that behind the apparent cool geometrical surface of the shapes and lines, there is a history, we could even say a tragedy. The painted canvas as a whole is gone, folded. All that remains is the printed documentation of its past unity. And yet again, this unity can be seen only through the bold colourful presence of the original serving as a base for the printed image. The action of Time is this—dense, folded, crippled bodies, but holding at their surface, like a nostalgic soul, the image of what they used to be, the memory of themselves. McWilliams’s works are neither paintings nor photos nor sculptures—they are glorious capsules of Time. An artisanal meditation and a material memory. Along with the sheer physical pleasure of colour and form. 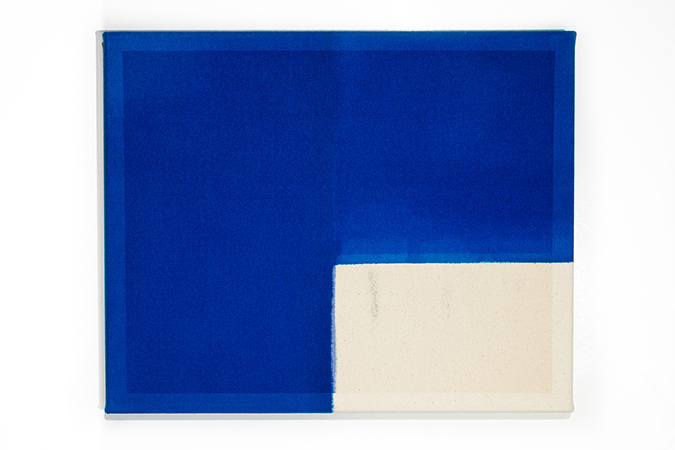 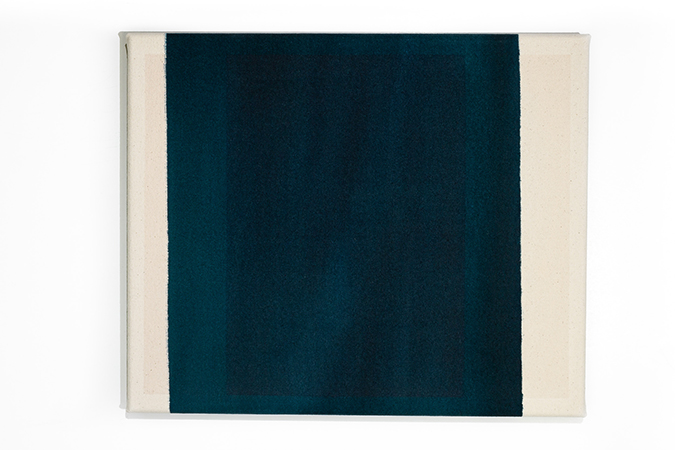 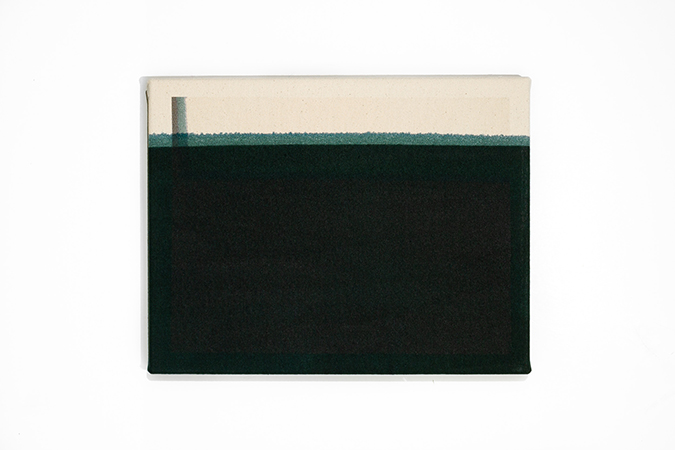 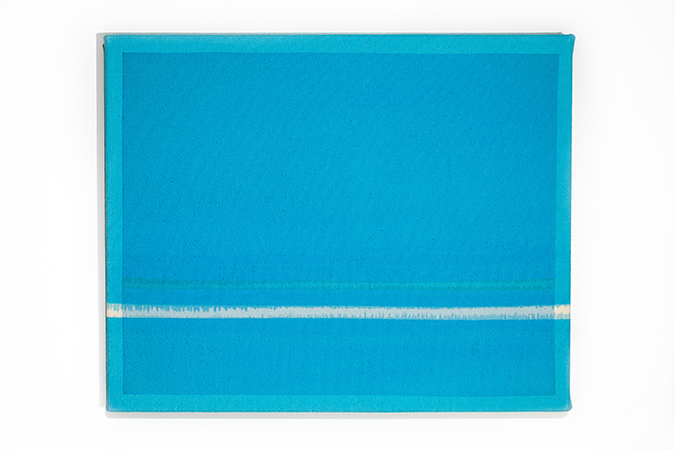 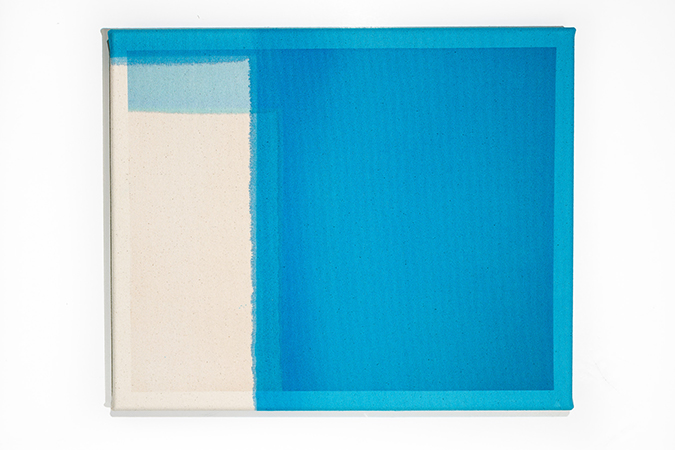 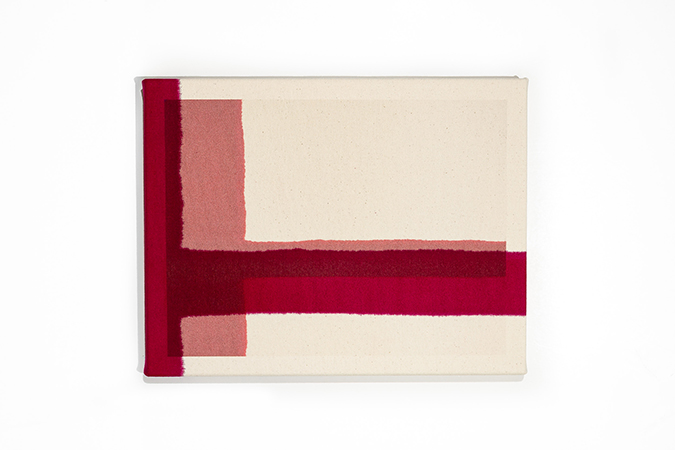 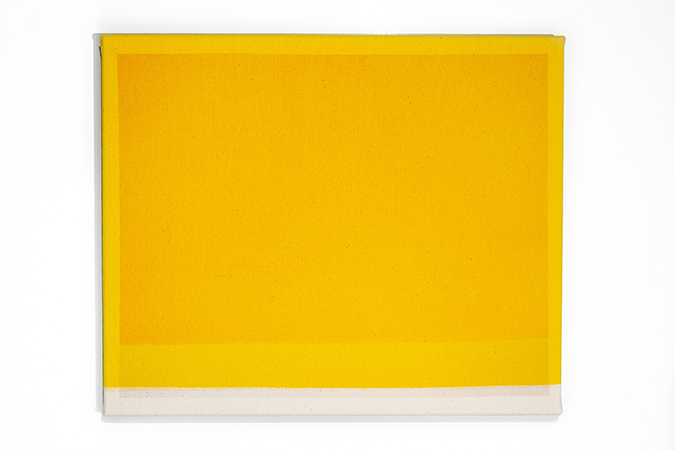 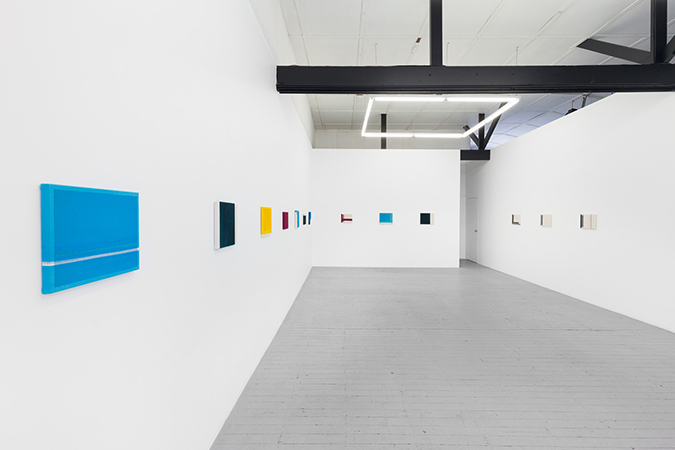 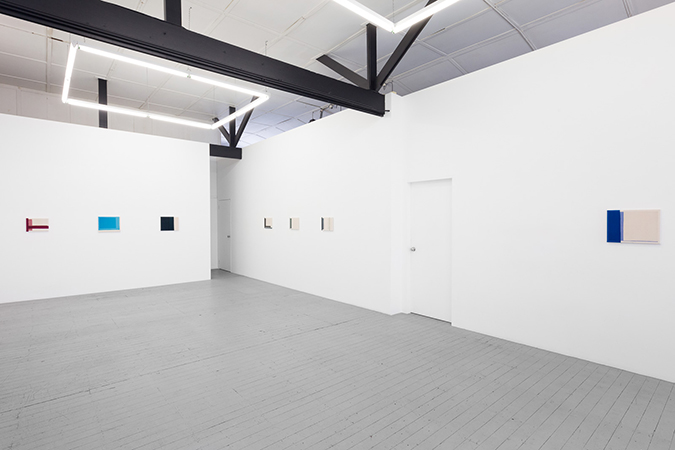 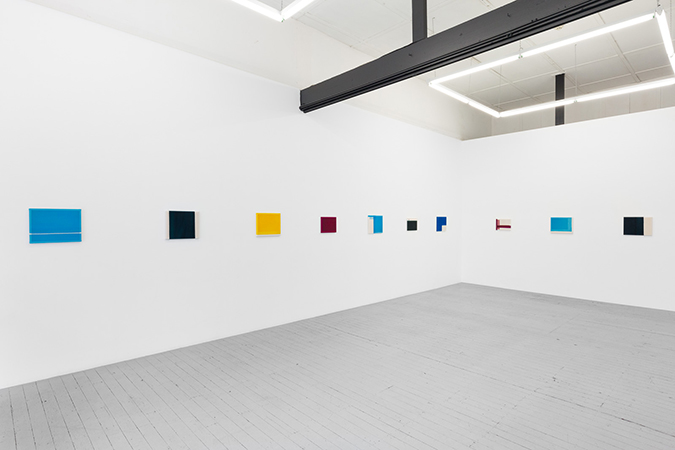 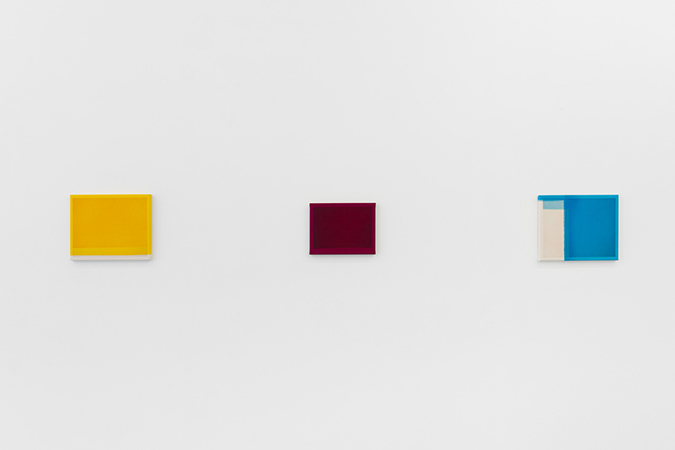 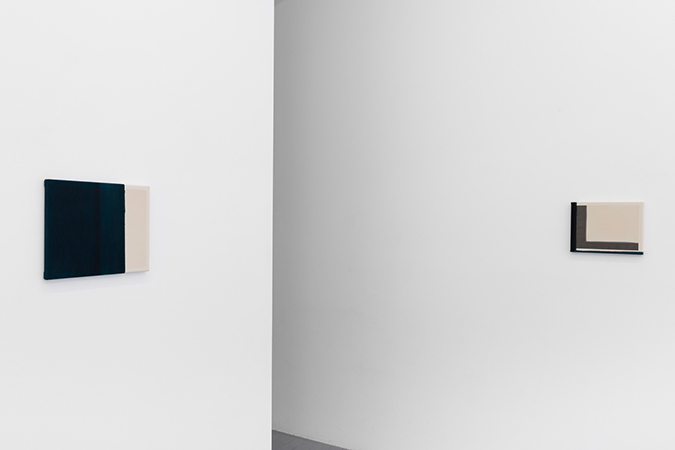 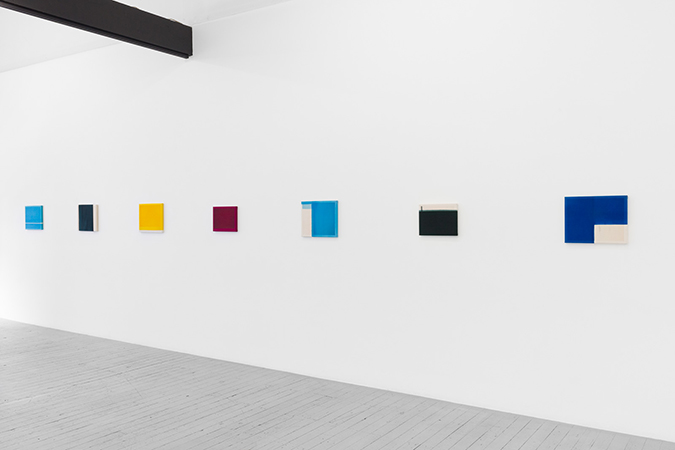 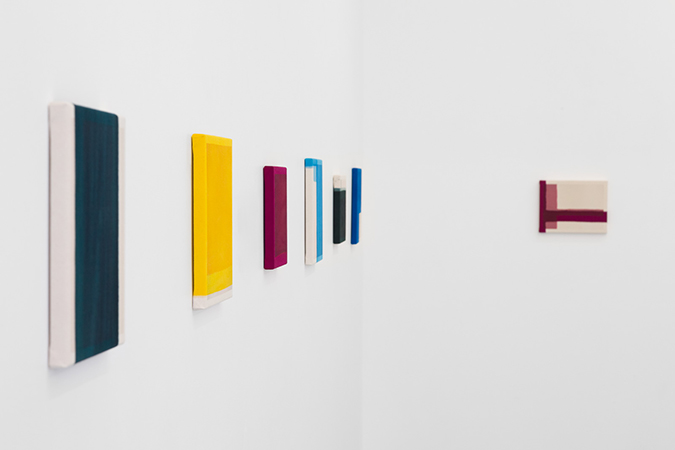 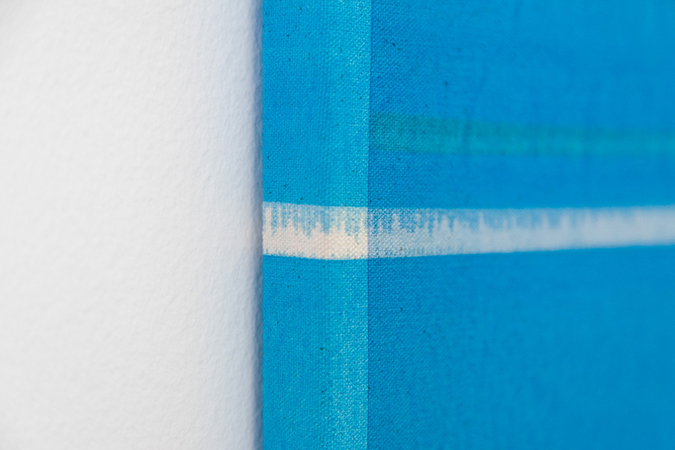