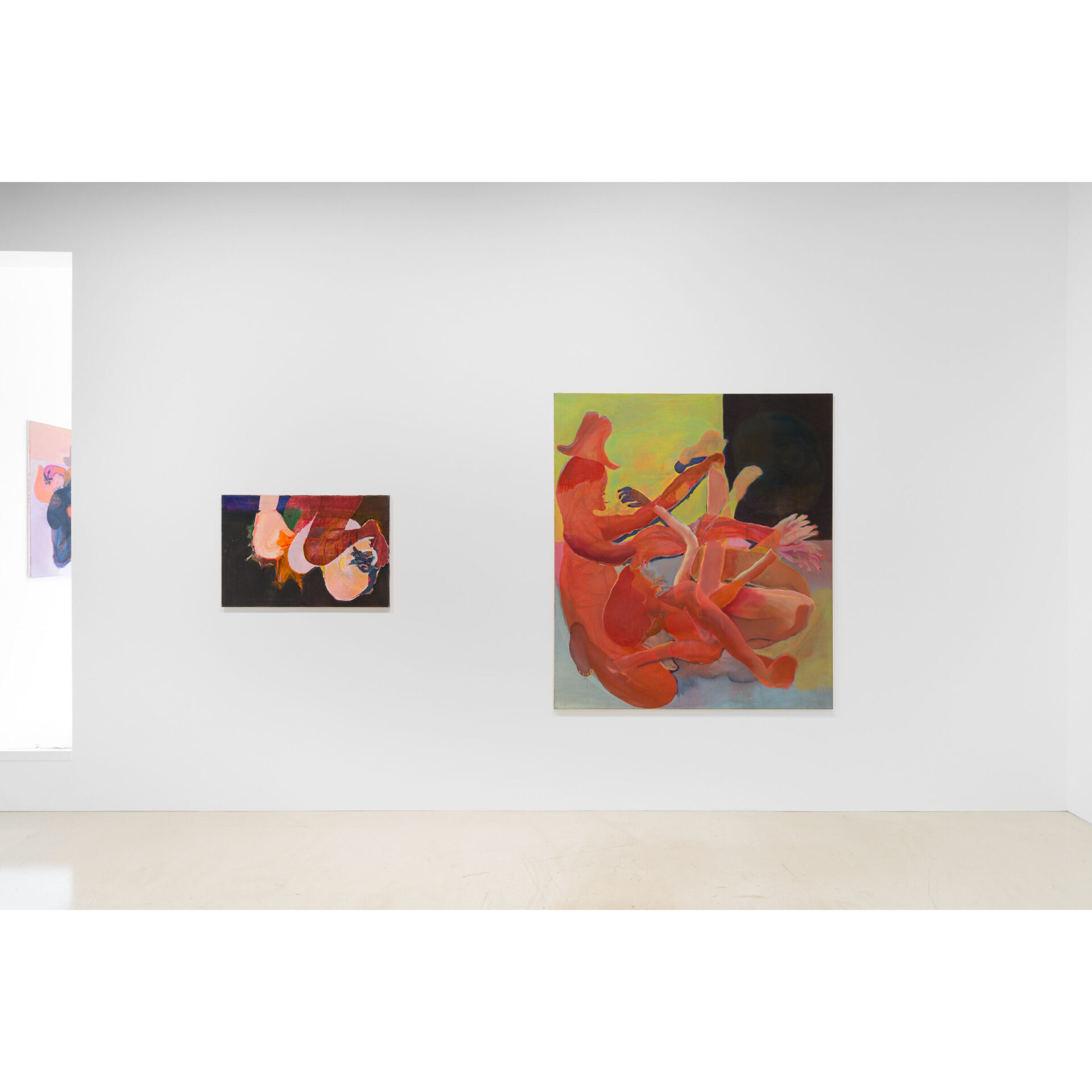 Teach Us To Sit Still

Six brief essays on the paintings of Daniel Domig

Looking here is to wander a lea of prepositions:
with / within / into / down / inside / between /
underneath / astride…
On the internet (without even asking) there are
suggestions of how to trim one’s prepositional
tendencies down for a leaner text – these
paintings strike me as gleefully inefficient and
prepositionally sinuous; mystical in their
emphasis on relationship and connectivity. It’s
as if the nouns keep flickering in the wind and
light in accord with the tide of interactions at play
within the frame. It is not that they are anti-noun,
there is lots to name but what happens between
the identifiable is more often than not where life
resides, in this sense I recognise a deep realism
in them.

Proximity: of the body to the world that houses
and possesses the body, to the dark interior of
the body that posses it too and the membrane,
the filmy dragonfly wing membrane of self that is
in overlaid states of definition, dissolution and
reconstitution as it is intimately eroded by the
movement of the two.
Spatial proximity to the other/s – it is often hard
to discern where one figure ends, becomes
another or something else altogether – bodily
form is unmoored. Proximity of form to the
amorphous.
There is the evocation of temporal proximity too.
Figures seeping upwards and downwards
through layers of paint linking with other
painterly moments, they are conversant with one
another, they are agents of change upon one
another sometimes they fuse, sometimes they
obliterate.
Perhaps we are witnessing a single body in an
ambiguous diffused overlay as it reckons with
itself.
Proximity of thought? In the variety of rendering
from one body/body-part to another within the
one painting, the myriad of painterly approaches
and inventiveness of marks with which they are
rendered, I recognise the mercurial ambivalence
of thought; what it is to be host to wildly
incompatible feelings and desires.
Proximity of knowing to not knowing.

2.
The paintings produce bodies
Over time they produce bodies
You sit before them
bodies vacate bodies
And return to bodies
And variations of themselves proliferate
Sprouting multiple limbs, the shadows of which
seem to have an autonomous motility
There is an abounding fertility,
A wild copulative energy
and as in sex, good sex at least, no theories or
pre-digested thinking
but
Intense presence
presencing
the paintings are travelling towards you, they are
boarding trains, they care to reach you, boarding
trains they are patiently arranging their selves
for you, they are stepping out from under the
shadows, they drip with shadow, all their arms,
they prepare their best faces for you, their best
faces and they are soft and open and languidly
flickering, they are stacking themselves, joining
hands, collapsing, melting and groping. They
aren’t comfortable, not always, certainly not
inside that pot they aren’t – but comfort isn’t the
point, not if it impedes movement or touch – and
touch seems to be key: that we touch, how we
touch, what touches what, what a touch can
mean
Unkeen on a boundary they are. The figures coil
and spill like smoke; imperceptibly dilating as a
body of water transgressing its bank; they are
place.
here come a flock of hands to caress a face
here a flock to mould a face, to pull it towards its
future as a sun, as a skull
here comes time, (“hello time”!) and a fresh
wash of paint that hushes the throng and
proffers up unforeseen possibilities
The sun is a face is an elbow is a womb is a
distended circuitous shared limb that wanders
out and loses itself in an embrace
Your gaze makes to steady the drift, to cut a
clear line, cast a net about them, set them down
they advance unfixed, un-ensnared, and
unabated.
But it’s not just for you after all. The waving
hands gesture, were always gesturing
prismatically the laugh was at the whole
scenario not so much precisely what you said so
you needn’t apologise; your role as determined
by they is to be caught up in the embrace.

3.
A painting or a drawing has a unique ‘all at once’
advent for us viewers on this side of the making.
Though we know they are products of time with
a start date and an end point the special quality
of revelation the form of a painting embodies as
opposed to say the linearity of the novel, clears
a space for time to assume its matrix like form;
things happen simultaneously, in myriad
combinations, in perpetuity; there is no obvious
beginning and it never ends. Each time the eye
moves across the surface it charts a new course
and loops back and rethreads in unprocessed
and unforeseen combinations. For all its stasis
our relationship to it is abundantly multifaceted
and one of flux.
If we are patient enough – looking solely at a
particular painting for an extended period,
withstanding the urge to walk away, the thing
moulded from coloured mud and time kind of
melts and becomes at once hyper-present and
more elusive and a lake to swim in. A new type
of seeing dawns as initial assumptions about it
quiver and crumble in the wake of the patient
heuristic and curious gaze – an endangered
species of looking. // Each time I consider these
paintings Daniel I have the sense that you have
a tremendous capacity for attention and a
dancer’s timing. I listened recently to Maggie
Nelson draw a correlation between her writing
and her involvement with improvisatory dance –
the moments before entering the dance in which
the dancer tunes in both to what is already
occurring and to what their body might do once
it joins, what it could add to the piece. It seemed
analogous to the often protracted process of
looking at and making paintings.

4.
Essay extracted from a poem of Emily
Dickinson’s:

Exultation is the going / of an inland soul to sea

5.
Essay in the form of a line of John Ashbery’s:

Is there another person you’d like me to invite?

6.
I might be seeking to justify my own ignorance
but I like to think it is best to be productively
wrong about any painting. Something I think I
am in relation to Daniel’s paintings. I have
looked at them and images of them so often for
close to fifteen years and they set my eyes
alight in their maddening genius of colour and
form, their buoyant handling of what can easily
ossify and sink, their inclusivity and generosity.
My soul readily yields to their nimble evocations
of the marrow and the spirit.

Even Our Skeletons are in Love

Teach Us to Care and Not to Care

We Will Grow Old with the World

Teach Us to Sit Still #1

Teach Us To Sit Still #2

Teach Us To Sit Still #3

Teach Us To Sit Still #4

Teach Us To Sit Still #5

Teach Us To Sit Still #7

Teach Us To Sit Still