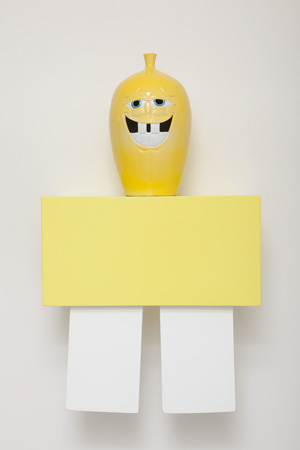 Philjames often puts two disparate images together. Mother Mary holds a laser beam; a Smurf floats over a bucolic scene; and the Hamburglar (or at least a cousin of the Hamburglar) is marrying an Edwardian Kleine Burger. Most commonly starting with a found object, print or painting, Philjames hijacks the image with an altogether different image in another register. There is nothing worse than explaining how a joke works, and the same applies for the work of Philjames. The synthesis that occurs is more than the sum of its parts and it is difficult to pin down. It opens up new possibilities for the viewer to explore while at the same time maintaining some of the singularity of the original artefact.

It should be noted though that Philjames applies this method in a myriad of ways. Sometimes it is art history serious, sometimes funny, and sometimes surreal; Philjames has experimented over the years with a broad spectrum of outcomes. It is a strange kind of iconoclasm because if anything the image is “upcycled” in some way and transforms the kitsch found thing into something marvellous again. This is not a Duchampian gesture of painting a moustache on the Mona Lisa but perhaps its opposite. Working on cheap lithographs, Philjames uses his meticulous oil painted stranger to infiltrate the cheaper world of ubiquitous prints.

The sculptures in this show are a new invention for Philjames and comment on the popular image in a different way. The busts that have been carefully remodelled are recognisably recognisable, they are historical versions of “that guy”. They are the sort of bust that would have been common on the mantelpieces and pianos of Victorian homes. To tell you the truth I could only recognise two: Beethoven transformed into some version of Dr Zaius and a cyborg Voltaire. These busts are strange kitsch objects because they are far from chocolate box images. Instead they represent the best and brightest of European civilisation. But perhaps what Theodore Adorno might have called “high class kitsch,” they are markers of received wisdom.

Beethoven for example was the epitome of the raging Romantic genius. Voltaire was known for his enlightenment, satirical polemics that set the tone for the sort of freedom from church and king that we now take for granted. These figures were once revered by everyone, touchstones for thought and action that we wanted there, in our homes and daily lives, like secular icons. They are commonly appropriated figures too from Salvador Dali’s bust of Voltaire in the Slave Market with the Disappearing Bust, 1940, to Schroeder’s Beethoven bust on his toy piano in a Peanuts cartoon. It shows that the influence of these figures, as heroes, survived, if a little declassed, well into the 20th century.

When did we stop recognising them? The outcome of Philjames’ work is to show that these authorities can no longer be relied on. We live in an age which has moved past belief in the traditional “father figures”. Who are the others, Cicero, Jefferson, I wouldn’t know? From the position of postmodernism Philjames would be seen as an artist of otherness, debasing the “dead white males” and making them silly. On the other hand they might represent a contemporary anxiety when we no longer know who we can trust, where old allegories and virtues seem meaningless (where Astro boy is a more likely sign of justice than Justicia herself). Or perversely does the art actually manage to revive our interest in Voltaire, to suggest that our future needs as much freedom and fraternity as it ever did.

But we shouldn’t get too hung up. The elliptical thought of humour is at the heart of these works. Violent mashups between the pre- modern and the now, Philjames throws it all in the air. The beauty and skill brought to bear on these strange objects though reminds us that for Philjames at least these jokes are in earnest.

The Greatest of All Time