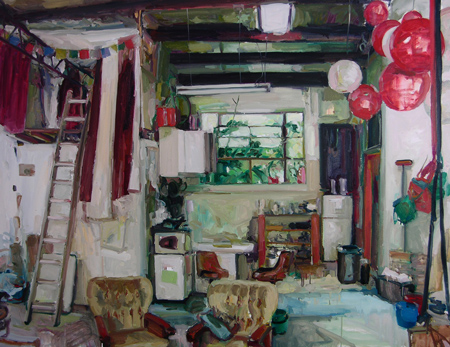 Access to the loft is along a condom-littered pavement and the odious smell of fresh cadavers from a nearby meat packing business follow visitors up the stairs to the front door. Property development in the area will inevitably change the faces on the street, but for now it is a raw inner-city space shared with creative friends, for parties and working from home.
Yvette Coppersmith, 2010

Yvette Coppersmith’s new collection Loft Suite represents a significant break from her earlier focus on portraiture. Despite this divergence, marked by absent figures, these meditative interiors are rendered with the same expressionistic intimacy that characterised her earlier work. Her portraits explore the self through masquerade, and the other, through voyeurism, revealing the chimerical nature of subjectivity. The same mutability that pervades her portraits is present in theses images of her friends’ St Kilda studio; without any real visual anchors, these interiors speak of the artist’s experience of transition, displacement, and the psychological value of place.

Space is never neutral. It is psychologically dynamic for Gaston Bachelard and a political battleground according to Henri Lefebvre. The Loft Suite reminds us of this. The studio paintings are not direct transcriptions of space. Each perspective is a microcosm, a locus of imagination with unique topographical features. Just as Coppersmith’s portraits are emotional landscapes of her subject, the animated objects in the loft are reciprocally anthropomorphised. There are corpulent lanterns, eviscerated turntables and a ceiling of flaccid underwear hanging from a suspended clothesline. Beyond their functional use-value, these objects become primordial vessels, psychological receptacles belonging to the register of the Imaginary. The house, Jean Baudrillard claims, is the symbolic equivalent of the body, where “man is bound to the objects around him by the same visceral intimacy that binds him to the organs of his own body.”

The Loft Suite triggers our imagination by personifying the Baudelairean lifestyle of its inhabitants. The loft cross-sections speak of spontaneous late-night drinking sessions, comings and goings, music, unresolved conversations and the banal activities of everyday life. As a result, it contests commercial images of modern living, or “domestic porn” as Coppersmith describes it, clinical shrines to functionality that clearly distinguish the domestic sphere from the space of labour. This collection is the result of a communal “lock-in”, an enforced period of creative work in the studio. By representing this dynamic space, Coppersmith references the historical evolution of the artist’s studio, which dissolved the boundaries separating the public from the private (by inviting patrons in) and the domestic from industry (it is both a home and a site of productivity where the studio space itself, as well as the art object, is produced and consumed).

The absence of figures in Loft Suite only emphasises its function as a vessel for creative habitation. Drawn by its corporeal familiarity, the spectator is “locked-in” to Coppersmith’s theatrical interiors just long enough to be inspired.