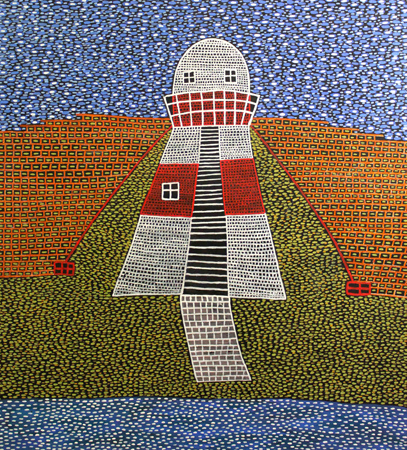 In June 2009 Chalk Horse presented an exhibition of a number of artists from the Yinjaa Barni Art Centre, of the Pilbara Region, in northern Western Australia. Clifton Mack was part of that inaugural exhibition and is a Yindjibarndi man born in Roebourne (Iremagadu). This is a compact show of three recent works of the Jarman Island Lighthouse. The lighthouse was recently restored between 2003-2005; it has been a recurring theme in Mack’s work since that time. Mack’s work represents the history and community of the area and is an outcome of contemporary concerns.

The subject of the Jarman Island Lighthouse is provocative. The paintings are surely equivocal: the lighthouse represents the past and the future; being and becoming; it sits on the island, a sentry watching time pass. It marks the opening to Cossack Harbour, which was the primary trading point for pearling until Broome took over in the early twentieth century. It is now a very important tourist attraction that brings people to the town but as an inoperative ruin, the lighthouse keeper’s cottage still in a state of disrepair.

Formally Mack’s work is exemplary of the Pilbara style. As a coastal area, from the sea to desert wildflowers, it has been noted that colour plays an important part in the community’s paintings. Jarman Lighthouse Sunset here shows a subtle warmth in the straw colours of the island grasses and the warm reflections of the low sun on the water. The red of the lighthouse in Jarman Island, represents the freshly painted and restored tower. The shimmering water and sky is a common theme at Yinjaa Barni and it is a genre in which Mack too excels.

Mack’s work is also characterized by a play between the abstract and the representational; the schematic and the imaginary; surface ornamentation and clear delineation. This series is more iconic than most of Mack’s work; the lighthouse stands tall and strongly in the picture plane. Even here though, there are attempts of erasure through the equivalence of mark making moving the pieces away from representation.

The lighthouse too is a symbol of colonisation par excellence. The lighthouse is a symbol of navigation and trade but also strategic mapping and ownership. This lighthouse is heritage listed as one of two precast iron towers which came in two shippable pieces (Chance Bros. Birmingham) and allowed the Crown to more easily erect these important beacons in far flung reaches of the Empire (without need of stone and masons). In 1888 this remote area was marked and opened up for traffic. The coming of the lighthouse, then, is a significant historical event for the Yindjibarndi and part of its on going story.