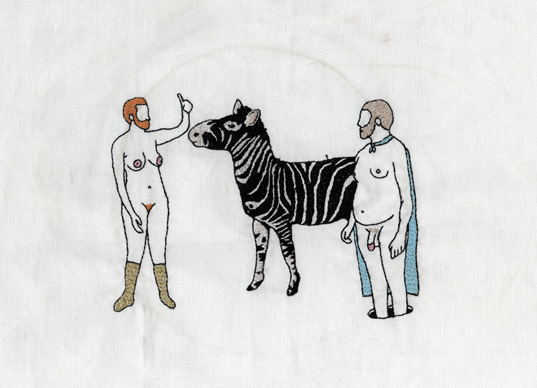 Moore discovered embroidery while travelling to Australia from the UK. He left his sketch-book at Heathrow by mistake, so to pass the time on the journey he embroidered the in flight sick bags using the in flight sewing kits. Tim moved on from sick bags and has been embroidering naturists (nudists) for the past two years as he finds them fascinating.

“I love the fact they sometimes have shoes on, or socks or a hat, I think they look like they forgot to get dressed. The thing I love most about naturists is that they call clothed folk textiles’”.

Moore graduated from Brighton University with a BA (3D design) in 1998.

With strong influences from early film culture and pantomime, ‘Tales’ is an intimate suite of watercolours centered upon melodramatic stock characters: the malevolent villain, the damsel in distress and the comic. The series consisting of approximately 30 small-scale fragmented works that form a vast landscape of dream-like figures in romantic interactions playfully exploring good and evil.

The “wise old bloke” fascinates Danny Morse. In this series of paintings ‘Great Whites,’ Morse unveils some of his favourite grey-haired idols. Amongst them is the British nature historian David Attenborough, the Australian cricket commentator Richie Benuad and the theoretical physicist Stephen Hawking.

Morse’s subjects come from a wide spectrum of careers and are considered by many as pioneers or legends in their fields. Explored in this series is the surreal nature of man’s quest.

Large Green Man of the Duck