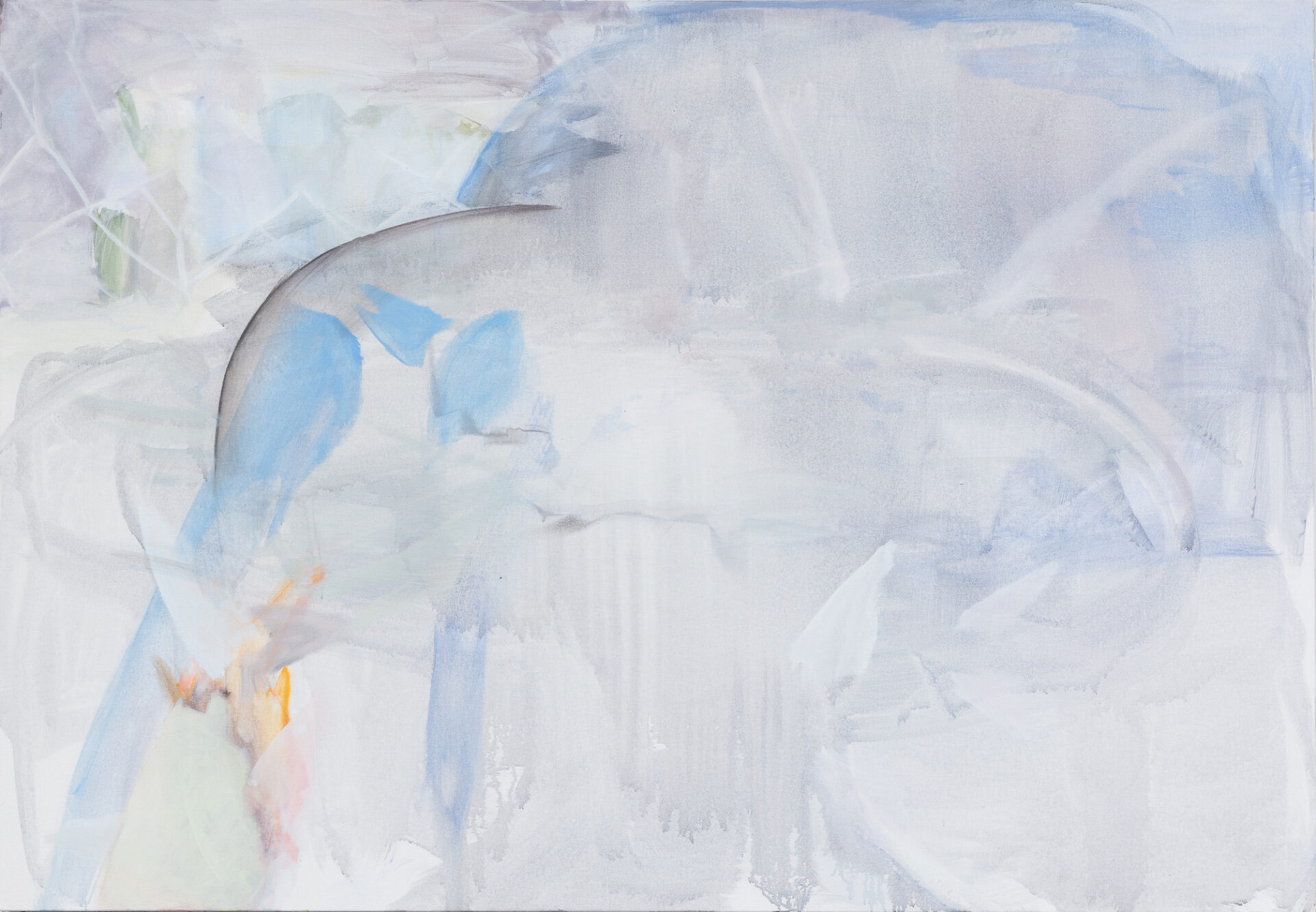 Working from a diverse set of source material, Clayton-Smith’s paintings are like imagist poems, bringing disparate images together, sometimes mysteriously, to evoke an emotion or feeling. She starts her paintings based on a feeling or visual trigger. Her apartment, her view, her studio, sketch books, photographs and videos are all drawn from. Equally though popular culture, art history and current affairs might feature. The paintings are based on the power of association and slippage. Fragments of experience are placed side by side, and move from the intensely personal (that might provide the initial energy for the work) to the global and communally shared. The scale moves from the mundane to the universal.

The series moves from privileging the paint as material to again bringing into focus the archived referent, the source images. The works are characterised by incompleteness and veiling.

Clayton-Smith puts on paint with a brush as much as she wipes paint off with a rag. Erasure and rubbing out are, especially in this show, present in all the works. This focus on becoming rather than on being, on incompleteness rather than presentness is the basis of the poetry of these paintings. The impetus on process rather than on a finished work opens up gaps and deferrals that let the audience in as co-conspirators.

This approach to painting can be found for some writers in the sketches of Cezanne or the pastels of Redon. In recent times the approach has achieved some level of formalisation through the moniker Provisional Painting. The various approaches to this painting are so broad, however, that no “school” exists. The works are deconstructivist, presenting images always in a state of flow, under erasure and veiled or slashed through.

Materially, the acrylic paint suits this beautiful obfuscation. There is the intensity of translucent paint here, almost like Japanese woodblock prints or waterc- olour. Pretty gauzes, shrouds of colour, veiled images hazy and disappearing underneath the structure of the paintings. Acrylic also rubs back and becomes chalky and rough, bringing out the textile ground, the warp and weave of the canvas. The paint is applied with brushes but in rubbing back Clayton-Smith has innovated a number of different methods from cloth to fingers.

Starting with Prey, this overall blue painting gives a sense of Clayton Smith’s approach. Prey is the simplest of reveries, it is a response to the artist staring dreamily out of her apartment window. The rainy day comes inside the interior space as a feeling. The sheets of rain are doubled in the left hand corner which shows a white netting of some sort, originally based on a photo of a truck’s tarpaulin tied down. The ground of the painting becomes the view including the Opera house and the Harbour Bridge covered in fog. Clayton-Smith evokes the slowness of the day, the day dreaminess, as the mist outside envelopes the space in languid luxuriousness.

Chase too seems to create a sense of outside and inside. This painting has taken five years to complete and is made through layer on layer. Images of leaves and twigs bring nature into the image. Although the hard verticals seem more like built structures. This painting is Clayton-Smith at her best. The marks allude to things only again to vanish before the audience’s eyes. The top left corner represents the vintage fabrics that Clayton-Smith used to work with. The space implies the artist, without representing the figure outright.

An equally imploding work is Rescue. The painting this time references the anxious wait surrounding the boys trapped in the Tham Luang Nang Non cave in Thailand. The artist then combines the image/feeling with the fins of an axelotl, the sun ray like shapes. The axelotl holds an important place in symbiology as an animal that can regenerate limbs; it is an animal which although fragile is resilient.

Remedy seems an extension of the same concerns. In a mountainous landscape a lagoon or pool is the shimmering and central motif. The work seems to suggest the purification rituals of baths; the remedies that Hygea brings through medicinal and hygienic water. The water is the glowing light of hope and renewal. The magenta paint in the left seems to represent the insistent life of beautiful flowers, finding footings in the otherwise grey ground. The red purple advances and recedes in the picture plane, and like the painting equivocates between vitality and stillness.

These paintings are full of emotion and feeling. There is a reverie here which almost leans into the elegiacal, in works like Remedy and Rescue. Clayton-Smith almost points to the sanctification of the world through personal prayer and communal calling. In theological terms this is a painting via negativa. It refers to the stripping back of the saints such as Francis of Assisi, foregoing all of the world’s evils and pettiness. It is a spirituality or healing through letting go and discarding rather than acquiring. From a theological point of view it does not look for positive definitions of what God is, rather merely understanding what God is not with all its inconsistency. In this way, as in these paintings, the truth is accepted as a mystery, a poetic possibility.