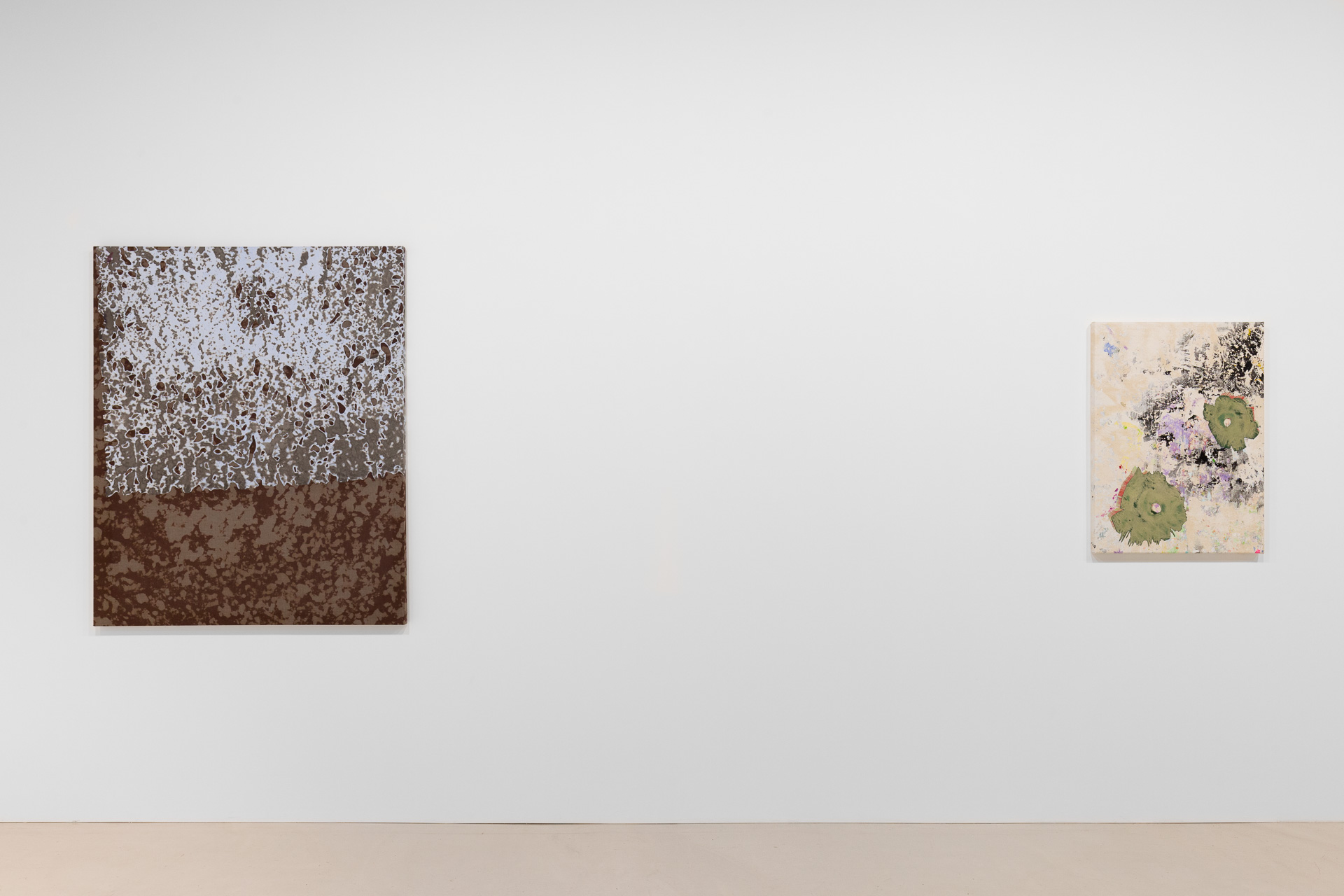 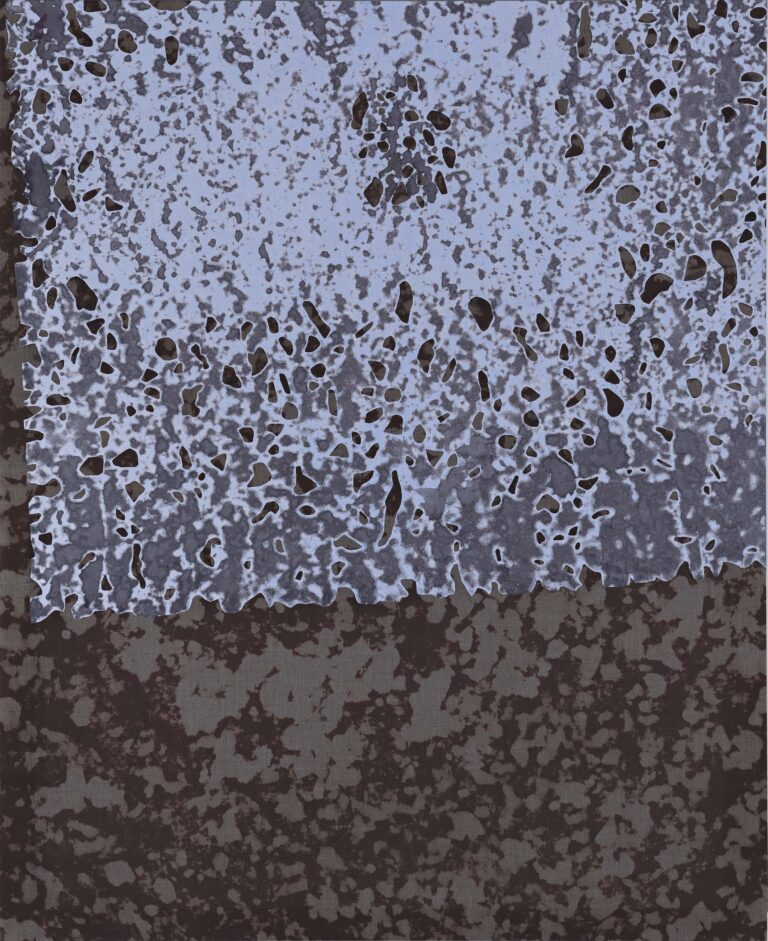 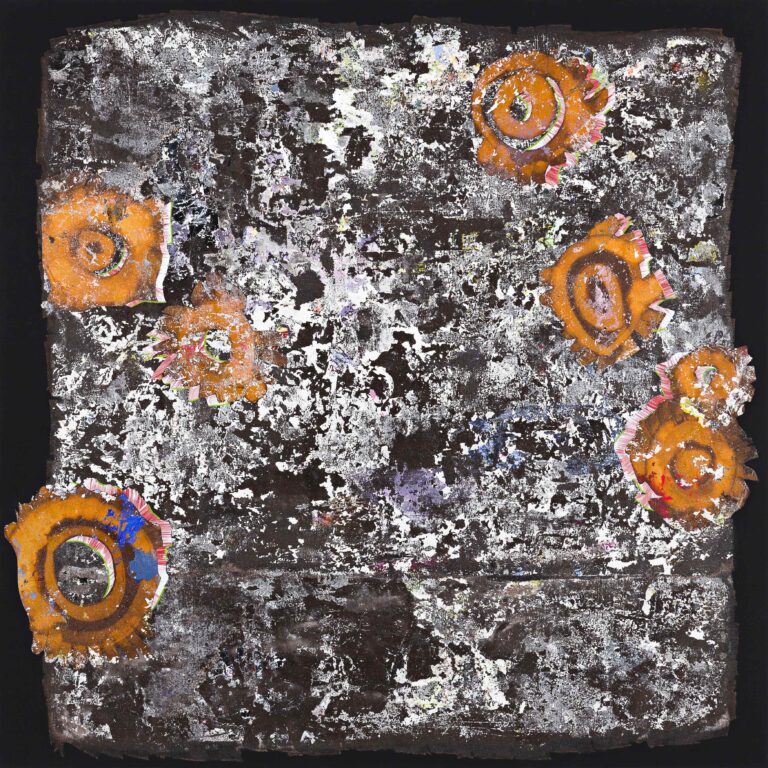 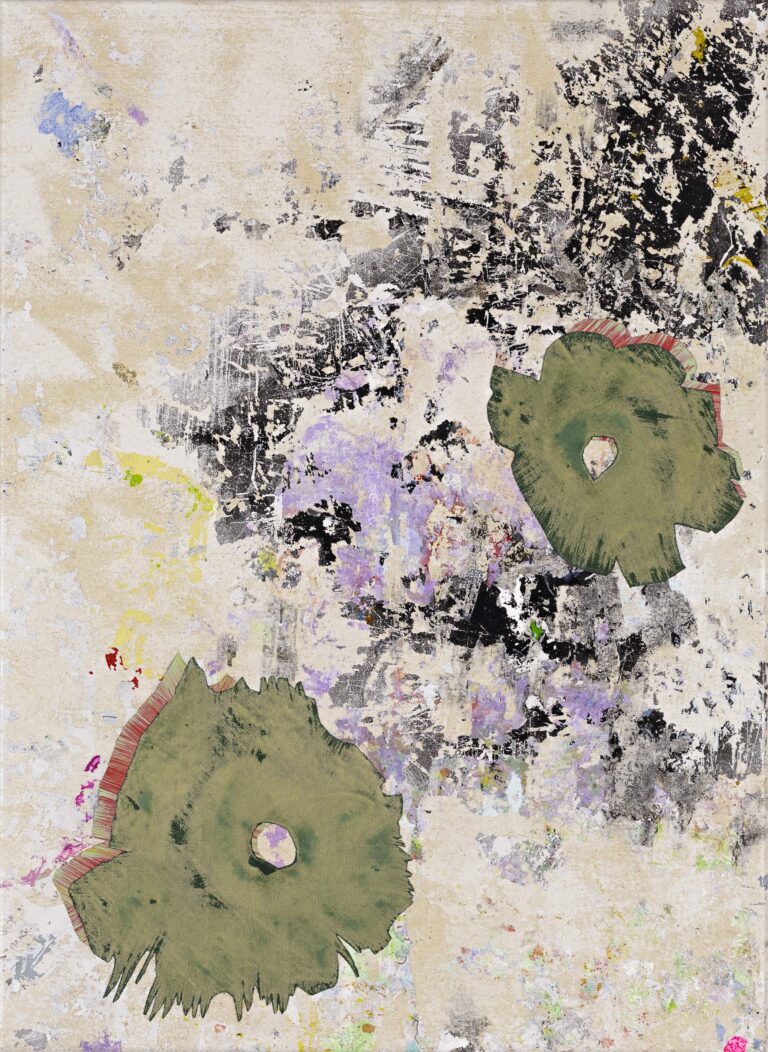 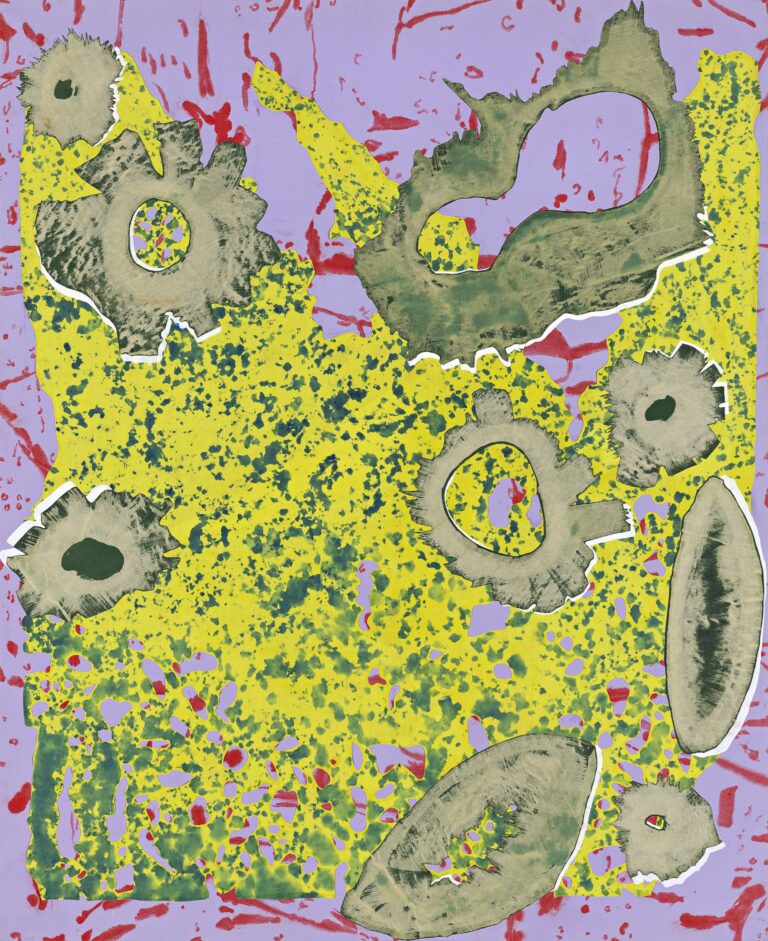 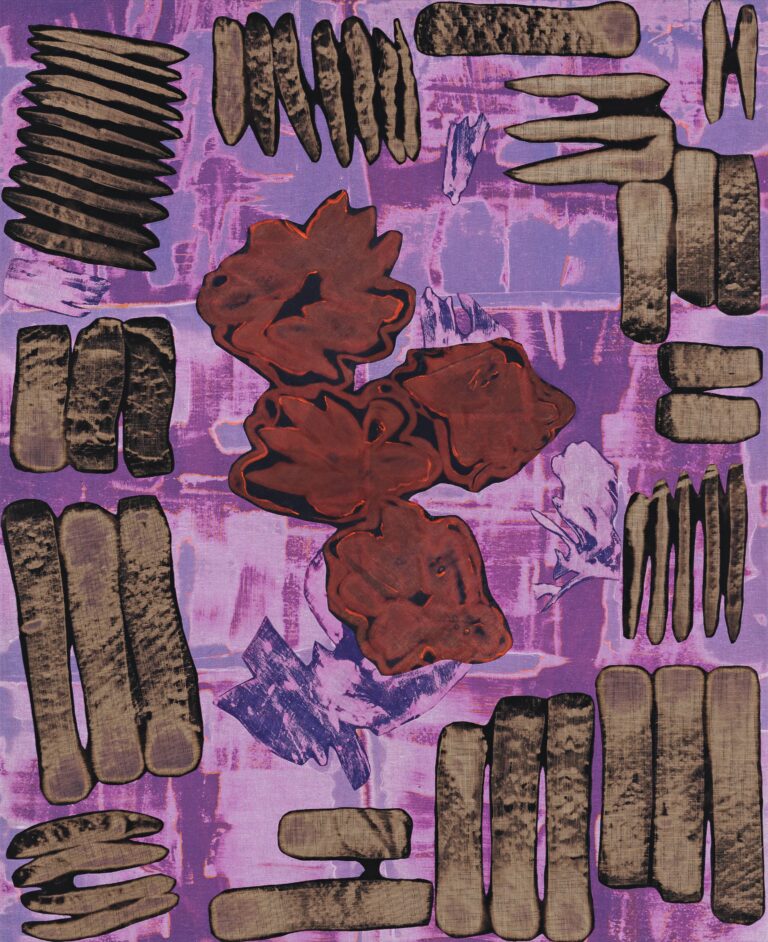 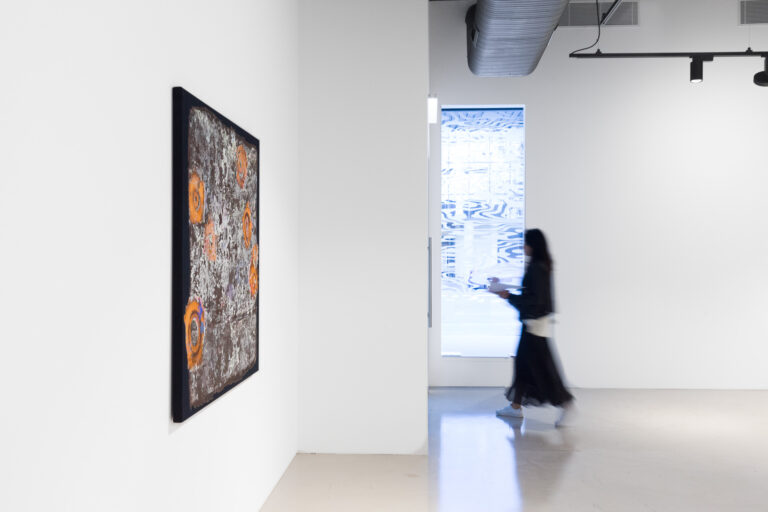 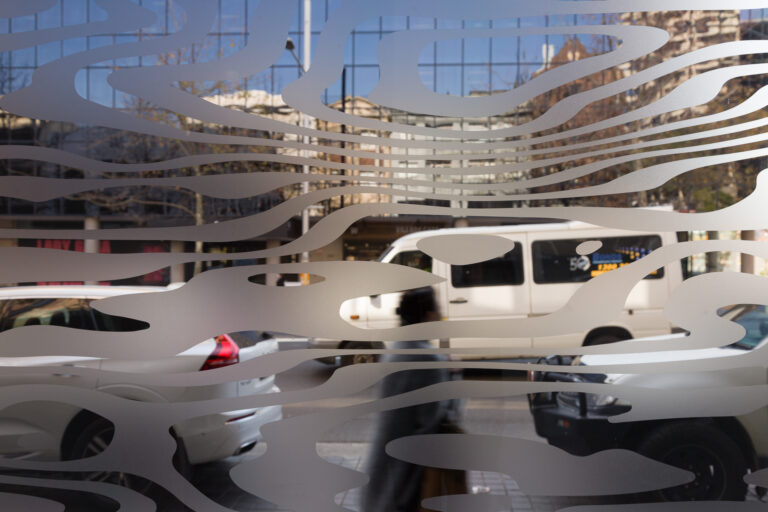 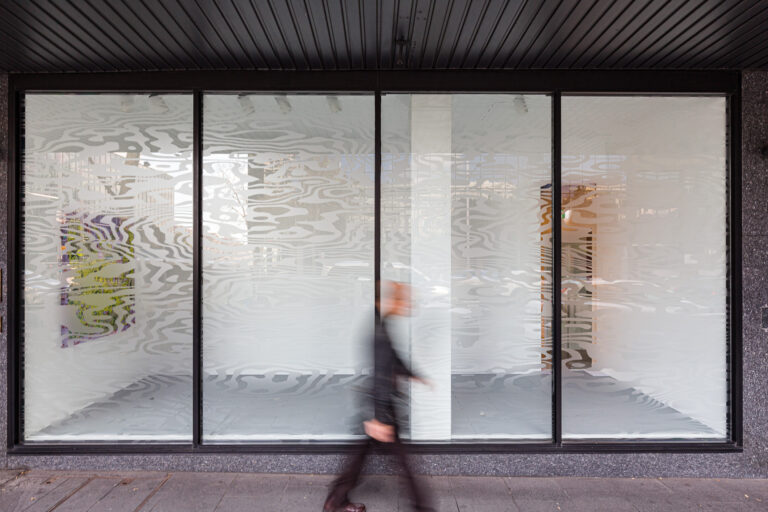 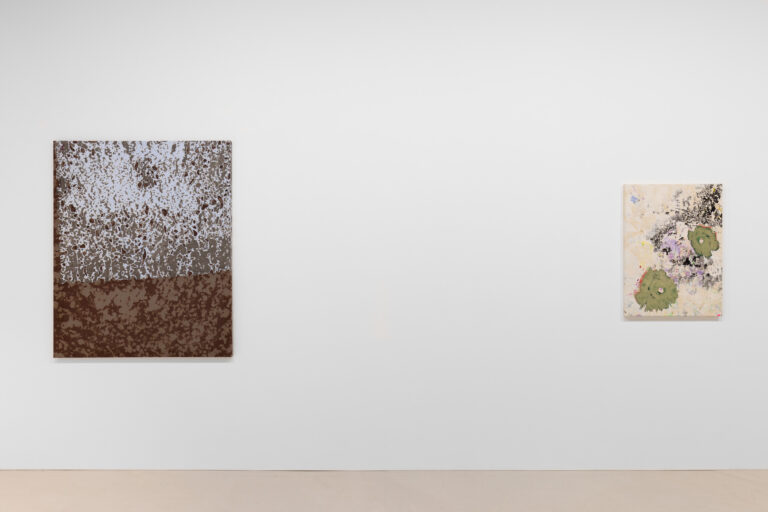 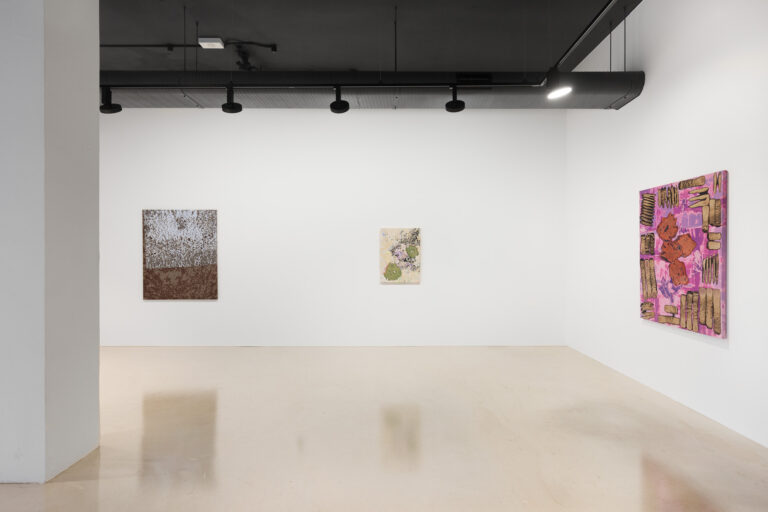 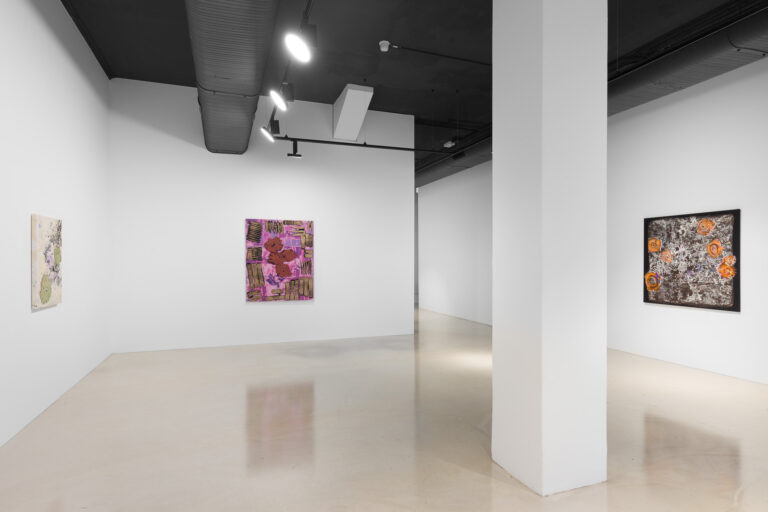 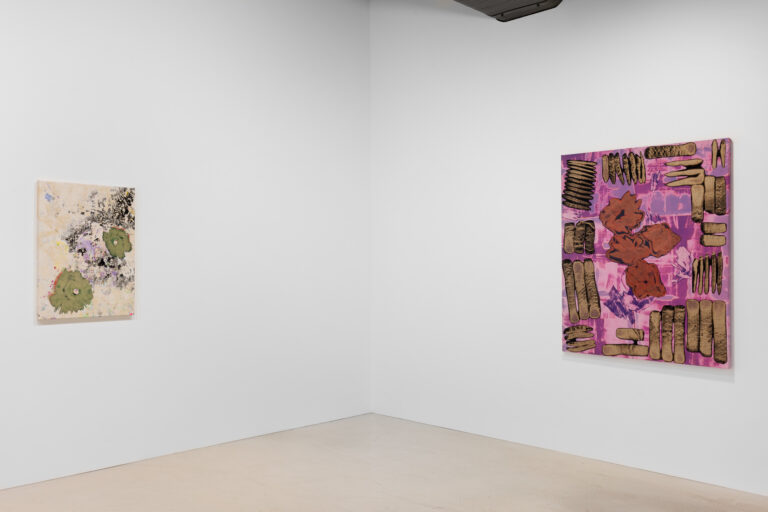 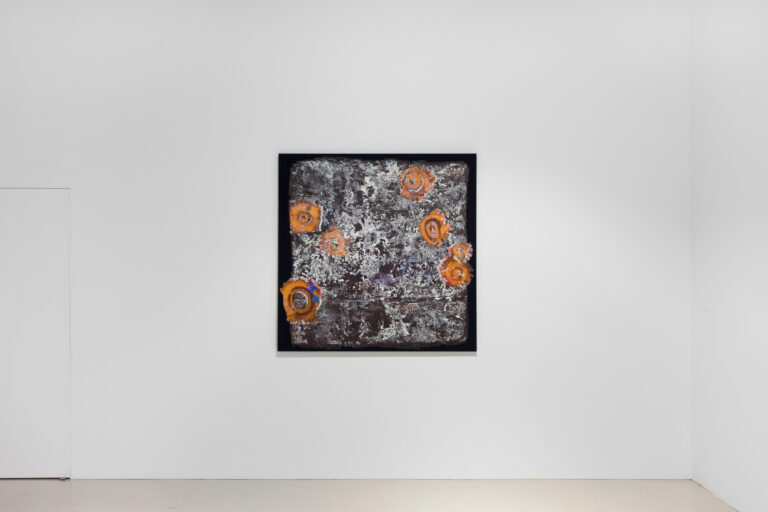 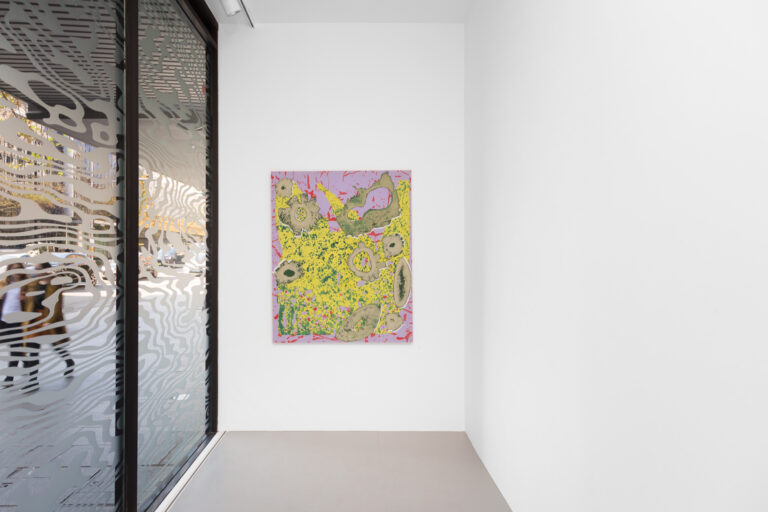 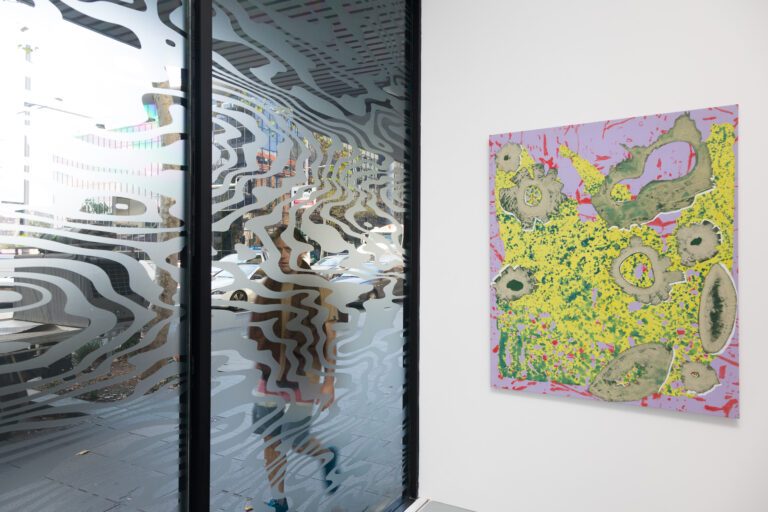 blue in gravy. I know understanding here is a matter of nerve and feeling, something, we can do with our bodies.

Emma sent me a message about insides and outsides. I think she is sending us all a message about insides and outsides. For us to know these aren’t two separate places. And that we are both and they are more or less one. I don’t know whether I am looking at something vast from a great distance, or an extreme close up view of something usually unseeable, an expanse of outside world or the hidden inside of something else. And this feeling doesn’t go away when I move into the gallery. Because Emma’s gallery window marks an elusive boundary, not between outsides and insides necessarily but a threshold nonetheless. It’s a weather pressure system, a coalescence, a space for overlaps and ambiguity rather than a line that can simply be crossed between distinct zones or bodies. Whatever, I think passing through it is an invitation to renegotiate terms in general.

There is a whole constellation of references playing in this work. You are a gleaner — collecting materials, gestures, connections. Your private gallery is teeming with hands and things they do and say: The scene from Chantal Ackermans film where Jeanne Delman concentratedly kneads mince for several hypnotic minutes, a scene from Seinfeld, The Brady Bunch, is that meatloaf again? Claude Cahun reaching out of rock, Yvonne Rainer, of course! Buster Keaton, a bus stop, registration- as in patterns but generally as an idea- of something working infinitely in repeat. Seamless. Germs, fungi, lichen: more than a superficial interest in science — but one where science itself is subsumed by something greater: Symbiosis overshadows biology in your bigger picture. Maybe also because science is so often a vehicle for engagement of a certain kind. Consuming, energetic, involved. Exploratory and generative. I read that “Lichens are a place where Scientists go to fall in love!” They are elusive and wildly, prolifically generous at the same time.

Speaking of scientists and love brings me to the cast of other studio weirdos I met in yours. Antony van Leeuwenhoek, the unlikely Dutch scientist who discovered bacteria and much much more. His discoveries were the result of a primary obsession with making microscopes, particularly grinding lenses for which it seems he had a preternatural ability.  Alexander Fleming discovered penicillin but also made tiny ephemeral paintings from bacteria that morphed and grew on his microscopic slides, an obsession that consumed him in the studio. Rudolf Laban the master of movement, inventor of Labanotation — a system for recording and analysing movement in written form.  Studio weirdness is a motivation for and cause of so much great work. Your own studio weirdness, the combination and culmination of this broad constellation of references and the way you go to work with and beside them, mirrors the essentially collaborative and composite entanglements that lichen reveal as the real basis for life. Your making of paintings is a way of touching surfaces with a certain knowledge that has been acquired, through research and movement and photosynthesis and that you are redistributing again.

Standing here it feels important to understand how lichen moves and grows. The word lichen, is derived through the greek, from the Latin leichein, literally meaning ‘to lick.’ (Like paint.) I imagine someone licking a rock extraordinarily slowly. In the most favourable of conditions in the Maritime Antarctic, growth rates reach one centimetre or more per 100 years. In the harsher environment of the Continental Antarctic, growth is much slower, and may be as little as one centimetre per 1000 years! It has been proven that Lichen can survive in space and also, “you can eat them!” (Did Emma make a point of telling me this or did I imagine it?) Lichen is significantly, neither a type of fungus or algae but a symbiotic union of both. Lichen represents a both-ness which is really a multitude of cooperative entanglements. It problematises the arbitrary distinctions between one and other, leads to a reevaluation of boundaries. It offers less bounded ways of imagining the production of selves and the interactions and cooperation of these with others.

In my mind there is a connection between this and the uncertainty or ambiguity of painterly representation, the potential both-ness of its perspective when regarded outside the bounds of a binary distinction between abstract and figurative image making that has been (tiresomely?) foregrounded in talk about painting for such a long time. I admit that I am prone to see pictures and make stories wherever I’m looking. Here, I see fingers that become more and less than what they are, everywhere. And squamules — shapes that describe the overlapping scales of lichen that grow thin and crust- like, adhering tightly to a surface (like paint again), free at their tips of leafy lobes, or shrubby growths of tufts. Powdery or jelly-like or stringy like matted hair, or wispy like teased wool. Or altogether structureless. There is a beautiful abstraction that painting performs, whether it is ‘abstract’ or not. At the same time, the hands and body are so present in Emma’s paintings. Behind them and beside them and before and after them. Movement constitutes a form of knowledge all its own. There is an unavoidable embodied quality to both producing and receiving messages. So whilst not strictly ‘figurative’ her paintings employ a figurative language of sorts in the way they engage the imagination and sensory responses of her audience.

Despite the sense of crossing through primordial soup into a landscape of seemingly effortless gestural profundity below, I’m certain the labour by which this work exists is so much of what it means. The tactile responsiveness to surfaces and colours and engagement in processes of working with them, bleaching, dying, drying, cutting, marking, choosing, are equal and interconnected to the multiple references behind Emma’s work. And this is repeated or echoed in the responsiveness being with it elicits in the looker. It is both about those subjects it takes into its purview and about a way of working with these, with a sensory proficiency, an intimacy with colour, a moving body.

Even as you obscure certain things you give more than the whole sum of their parts. It’s possible to be a little bit evasive and also very very generous at the same time. Brady bunch germ acid wallpaper, a backdrop for a cast of ‘palm friends’ that perform for you — hands and everything we can do.

Looking at these paintings I feel a sudden urgency to return to some work or another of my own. I feel that there is a direct transfer of pleasure, an excess that’s available to share in, a drive to engage that you activate: Drawn to the slubby grain of a particular textile, tougher after dying with bleach, washing and drying. Finding ways of manipulating this fabric, working across a section of concrete, borrowing a gesture, becoming lichen and moving at the pace of palms, touching surfaces. Lichen Lace. Movement and time. Feeling and nerve.