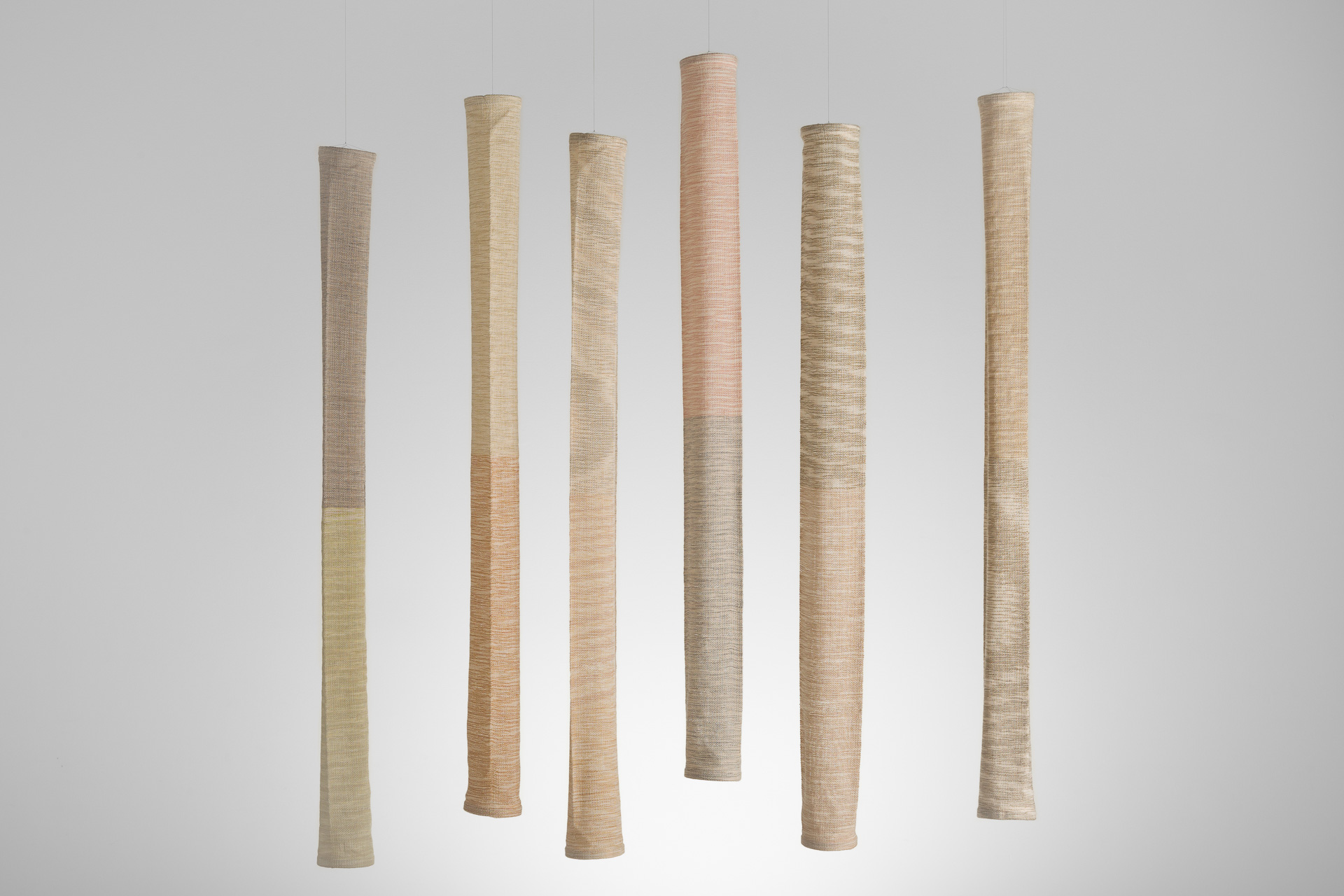 The woven sculptures of Sairi Yoshizawa hang weightlessly; they are translucent and lithe. Though they exude an aura of stillness, the wind can twist them gently and light passes through them like sunshine through gaps of trees. Light also reverberates amidst the sculptures internal walls causing them to shimmer and vibrate. In her allegorical forest, hanging from above, we can feel the rhythm of life.

Amidst  is an ode to the natural world. Cotton and wool are drawn from the earth and the pigment of Yoshizawa’s dyes are sourced from leaves, roots, plants, herbs, and spices. One half of a pendulous form may be light grey derived from eucalyptus leaf, while the other a soft pink, is from sandalwood. We see the indigo flower with turmeric in the form of a subdued lime green, burnt bark as a warm reddish umber, and marigold as a rich earthy orange with specs of yellow. Every dye bath always varies in tone because the same leaf will produce a different hue depending on when it is foraged. Her practice flows with the seasons, allowing them to shape and shift each series; in this way she preserves them within the fabric. An autumn leaf may crumble, but here it exists through pigment on material indefinitely, without the limitations of time.

Yoshizawa’s forms are patiently composed through a complex methodology involving ikat and various weaving techniques. Ikat is a resist technique where parts of yarn are tightly bound at random points and dyed. Once the dyed yarns have dried, they are lined up on the loom to form a pattern. Yoshizawa finds this painstaking process soothing and meditative, these attributes seeping into the work itself. Although repetitive, unique patterns transpire as the fibres are woven, yielding a number of textural outcomes that cannot be replicated. Using a double weave structure, her three-dimensional pieces are elaborate and ethereal but robust in their construction, not unlike the silk of a spider web. The larger works have a looser weave, allowing more light to move between the empty spaces, thus creating a moiré effect where light rushes magnetically in all directions. The smaller works consist of a tighter weave where ripple-like patterns are prominent, and a greater sense of quietude inhabits the structure.

Yoshizawa’s artistry continues the lineage of artists like Ruth Asawa and Anni Albers who worked with textile for its supple tactility. Although having existed for millennia, textiles have not always been considered ‘high’ art. Asawa’s dangling sinuous sculptures and Albers free-form repetitive structures were instrumental in elevating its status, and it wasn’t until 1949 that Albers became the first textile artist to present a solo exhibition at the Museum of Modern Art in New York. The divide between fine art and textile is a fiction and primarily a gendered issue. The perceived ‘feminine’ attributes are often what gives the medium its capacity to create abstract works unlike any other art form.

Yoshizawa embraces the material for these properties as well as its enduring kinship to folklore and nature. Walking through her airy weavings is a spiritual experience where one is immersed in a calming ambiance. If for a moment we wish to seek this, that is so often lost in an active and mechanical world, it can be found here, among the sculptures in Amidst.