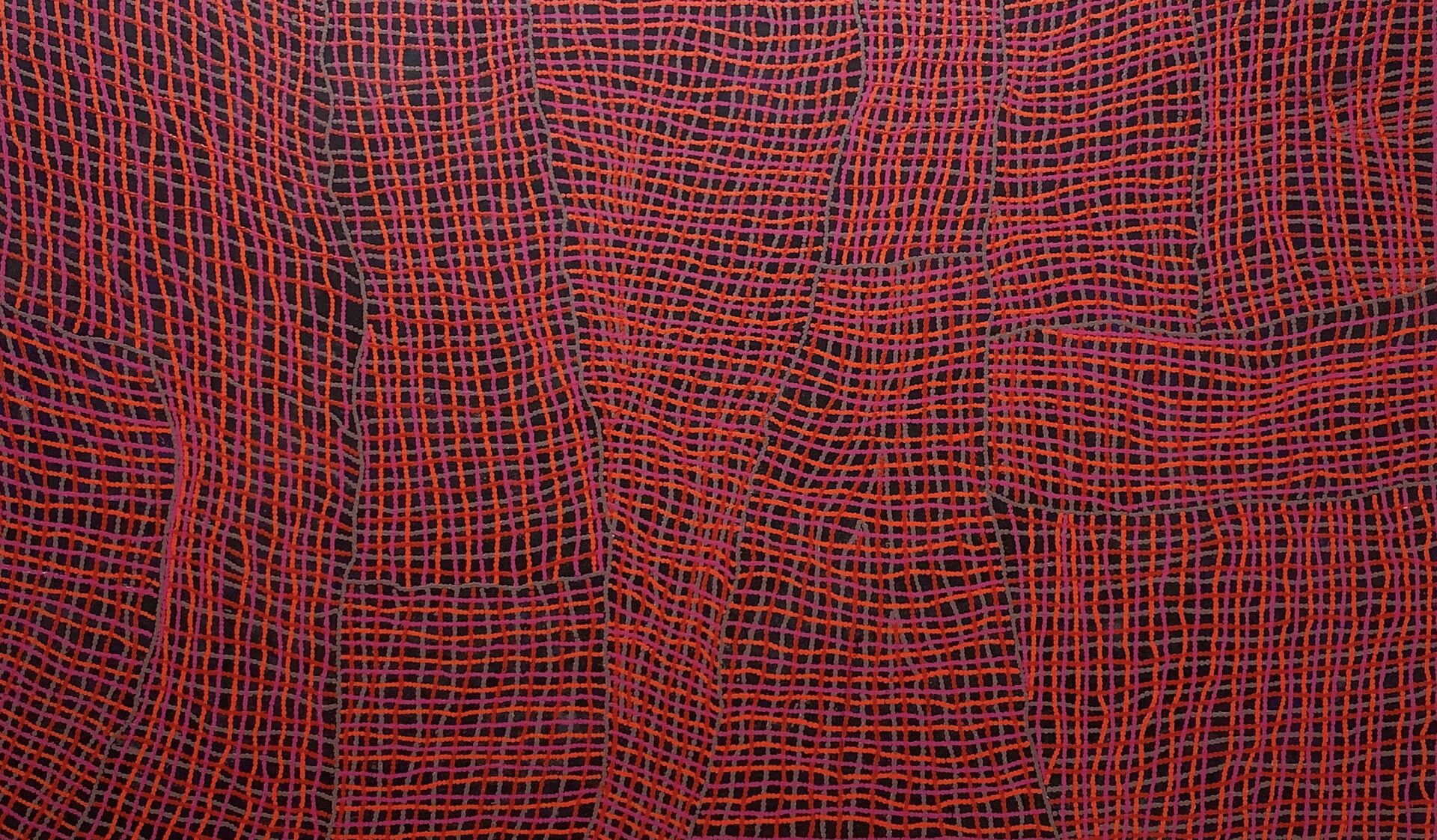 Paintings from the Pilbara

Paintings from the Pilbara

Paintings from the Pilbara #2

Paintings from the Pilbara #3

Paintings from the Pilbara #4

Paintings from the Pilbara #5

Paintings from the Pilbara #6

Yinjaa-Barni Art is a collective of Aboriginal artists who predominantly belong to the Yindjibarndi language group and whose ancestral homelands surround the Fortescue River and Millstream Tablelands.

Based in Roebourne, a small town in Western Australia’s Pilbara region of the north-west of the state, the Yinjaa-Barni artists create deeply personal works of collective memory, rendering the wildflowers, river systems and landforms of their country onto canvas.

Aileen Sandy is a Yindjibarndi artist from Roebourne. A member of a prominent family of Yindjibarndi artists, Aileen’s mother comes from the Millstream Tablelands, and her father’s country is around Mt Florence Station. Aileen’s artwork is known for its distinctive straight lines, circles and dots, and depicts her traditional country around the Millstream Tablelands and the Fortescue River. Incorporating influences from basketry and weaving, Aileen’s works display a blend of dotting and more contemporary influences. Earth reds and the varied colours that course across the Fortescue rock faces can be found in her work, often with river sand incorporated into her paint to achieve a textured effect on canvas. Since the start of her practice in early 2007, Aileen’s works have won the Cossack Art Awards, Northwest Landscape Painting category (2010) and Painting by a Pilbara Indigenous Artist (2013), been acquired by the Art Gallery of Western Australia (2011), and commissioned by the Ritz-Carlton Hotel Company in Perth (2019).

“My parents had moved in to town from Mt Florence Station in their ancestral Country in the Tablelands, but they still worked at the Station seasonally and we would go back there for school holidays sometimes. One of the jobs I remember my Dad used to have was as a dogger – tracking and catching dingoes.”

Melissa Sandy is a Yindjibarndi artist who was born in Port Hedland and is based in Roebourne. Melissa’s mother’s Country surrounds the Millstream Tablelandss, while her father hails from Adelaide. Her acrylic on canvas works are recognisable for their meticulous selection of colour, depicting her Country as well as narratives of personal meaning. These contemporary artworks often use fine dot work to share aerial perspectives of wildflowers or plants. Melissa began painting with Yinjaa-Barni Art in 2006. Her artworks have been exhibited in group shows in Perth and the Pilbara, and in a solo show at Sydney’s Chalk Horse Gallery in 2011. She has won several prizes at the Cossack Art Awards, including Painting by a Western Australian Indigenous Artists (2008) and Painting by a Pilbara Indigenous Artist (2018), and she has had her work acquired by Flinders University Art Museum in South Australia (2014).

“I paint about my Country, about the wildflowers that suffocate the Country in a beautiful way, and I paint about things that have deeper meaning for me. My arts centre is my home away from home. Surrounded by family. We thrive on each other. I think that’s one of the reasons we keep going. That’s why we’re strong, as artists, because we help one another through.”

Dawn Sandy is Yindjibarndi artist from Roebourne who began painting in 2006. She is the daughter of the late Yindjibarndi artist Celia Sandy, and niece to prominent artists Aileen and Allery Sandy, with whom Dawn credits with first teaching her to mix her distinctive colours. Dawn’s artworks are often painted from an aerial perspective, overlaying dot work in warm colours. Dawn draws inspiration from her Country at different times of the year, the river and bush flowers during different seasons, the rocks, and the rich colours that pass over their surfaces at varying times of the day. She has exhibited her artworks in the Pilbara, Perth, and Sydney; and has won the Cossack Art Award for Painting by Western Australian Indigenous Artist (2010).

“Painting offers me time with my aunties. To be on my own, away from the kids. I first started back in 2006, Melissa [Sandy] gave me paper and a pen, and my Aunty Allery showed me how to mix the colours… I often paint the Millstream wildflowers. Pilbara wildflowers are beautiful, especially when they are in full bloom. Going out bush at this time of the year is always a treat. To be able to gaze at the colours always gives me inspiration for my paintings.”

Yindjibarndi artist Marlene Harold was born at Mt Florence Station where her father Ned Harold and her mother Hilda Fishook worked at the time. She has lived in the Kimberley and also at Mulga Downs Station and Wittenoom Gorge in the Pilbara. Now based in Roebourne, Marlene started painting in late 2006. Her artwork is characterised by its impressionist look, delicate mixing, layering technique, and the fluidity between highly charged colours and subtler blends. Marlene employs a variety of techniques such as dot painting with splatter and stick work to create her striking, contemporary renderings of sites and ancestral stories from her Country. She is represented in many private collections in Australia, and has been acquired by the Parliament House Collection Western Australia, the Holmes a Court Collection, and City of Joondalup. She has exhibited her artworks in solo and group shows in the Pilbara, Perth, Sydney and Singapore and has won prizes at the Cossack Art Awards for Painting by a Pilbara Indigenous Artist (2011 and 2014). In 2011, a painting by Marlene was chosen to be presented to Queen Elizabeth II on her visit to Australia for that year’s Commonwealth Heads of Government Meeting.

“According to Yindjibarndi law, in the beginning the sky was very low. When the creation spirits, Marrga (The Spirit God of The Land), arose from the ground they raised the sky and the world out of the ocean. This creation story is called Ngurra Nyujunnggamu (When the World was Soft). The Marrga (The Spirit God of The Land) gave names and form to the country and then to all the birds and animals. Finally, they created the Ngardangarli (Aboriginal people). This is a dreamtime story handed down by our ancestors.”