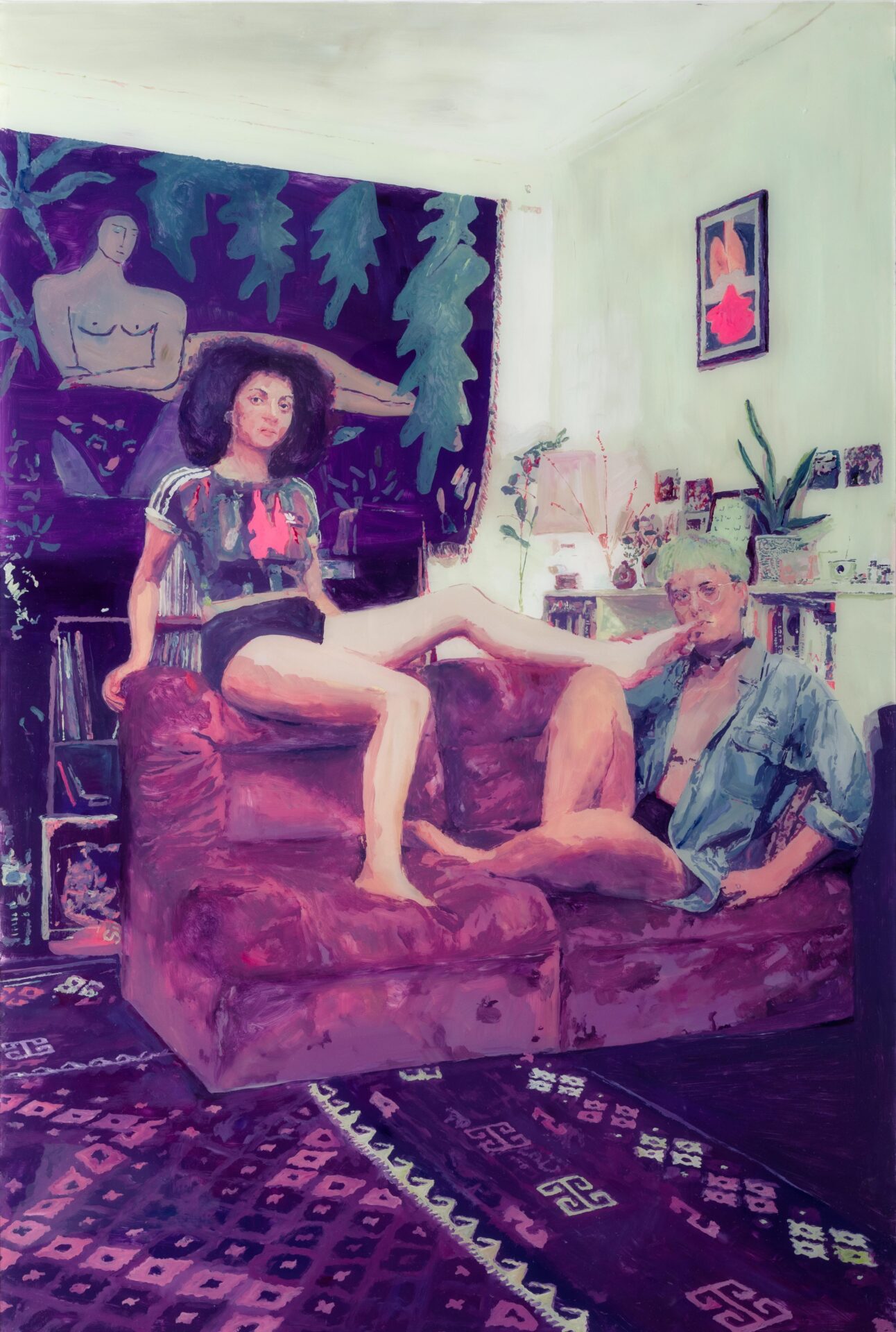 Welcome to an encountering of the Queer gaze and the gays. In a push away from the male gaze that has dictated viewing experience for centuries, these pieces are structured around a shifting focus of cultural expectations for gender identity, sexuality and gender politics. Being a baby gay at 37 is hardly shameful; It’s actually relevant. It is the revelation of the 21st century. A watershed that everyone should be engaging with. It’s the societal void of representation that is the impetus for what is displayed here. Looking around these walls, you as the viewer are invited to engage in queer identities. You are invited to engage in scopophilia: The obtaining of sexual pleasure by looking at nude bodies. Although not all of the displayed bodies are naked, all are inviting inspection, others are clothed but command the viewer’s attention.

Two bodies, engaged in a form of foot fetish eroticism, look out from beyond the glass picture frame and act as our interlocutors, drawing us into their realm. Fully clothed, the only nude in this image is a modernist representation of a female body on the wall behind our subjects. The queer bodies in the foreground do not fall for the passivity of the nude behind them. Our subjects are active owners of their bodies.

Classical art history dictates vanity as a woman looking at herself in a mirror. Here you are invited to look past the glass that traps the patriarchal viewing of bodies. Here you are invited to look with queer eyes & in turn, our subjects engage in the looking with you. In a Lacanian viewer experience, you are expected to feel the gaze of these subjects. To be objectified in a reciprocal manner. You are being seen just as you see.

So what is Queer? An oddity, an eccentric thing, a homosexual. The term queer has a jaded and pejorative past from the 19th century. As a neutral or positive self-identifier, ‘queer’ has its reclamation roots firmly planted in the HIV/AIDS activism of the early 1990s.

In the 30 years since the Queer manifesto hit the streets of the New York pride march of June 1990, Queer reclamation has seen a transformation within the boundaries of hetero-normative spaces. But there is still more ground to cover. In the three years that have lapsed since marriage equality laws were passed in Australia, under the faux egalitarian measures of national plebiscite, queer Australians are still subject to victimisation from government, institutions, families and the random stranger on the street.

The globe was shook when Hannah Gadsby’s Nanette described being beaten by a man, told in a show that was marketed as comedy. The backlash from the industry speaks volumes to the attitudes we as queer people are still facing. The fact that trans people die, on average, much younger than cis people, that queer people face abuse at a much younger age and a higher rate than straight people, that we still need to advocate for equity and are told to stand down, shut up, fuck off, these are all markers of our lived plight. Reclaiming queer, reclaiming our identity, reclaiming our right to our sexualities and to our bodies, not as weird, eccentric, pejorative, dysfunctional, detestable, but as objects worthy of inspection, worship, depiction. Not only does the cis male or the cis female body deserve rendering in oil, that we look beyond the looking glass of heteronormativity, that we can be the wet objects of dreams. That we don’t need you to validate us. We will advocate our rights until terms like ‘validation’ or ‘acceptance’ are no longer used because we won’t need them.

You’re invited to view these Queer Bodies in ceramics and oil on glass as they are, reclaimed bodies born out of isolation. Wet Objects.