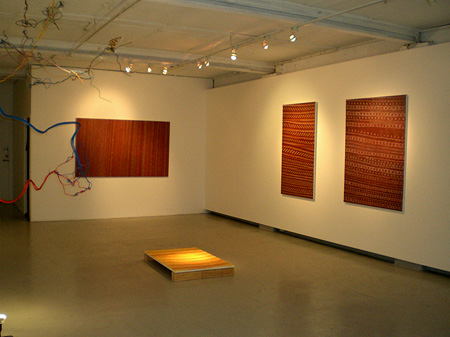 Weaveworlds is a curated exhibition which interlaces emerging and established practices which draw on ‘weaving’ to create material signification, in both senses of the term. There is no traditional weaving craft in this exhibition. Instead, this show explores how weaving can transcend textile technique to be both a way of formalising the material of one’s place or history; but also a more conceptual process – as in weaving together a story, or the strands of identity, character or history.

Suzan Liu’s installation piece ‘Narrative Circuit’ is the second in a series of wire installations – the first being done for Space Invaders, a Half Dozen show at 4A. This piece is larger and more intricate. In this work Liu experiments with colour, using a full gamut of used network cables. Her piece is a drawing that has managed to jump off the wall, with the linear skeins extending over the wall though points of interest, or nodal knots, that seem to express something of the network or woven narrative lines. The installation is part abstract synopsis, part synaptic chart.

In the same downstairs gallery, Theresa Lemon, Patsy Marfura and Annunciata Nunuk Wilson (artists from Peppimenarti) are hung in dialogue with Liu’s piece. The name of this community is drawn from the Aboriginal words Peppi (rock) and menarti (large), referring to the rock formation that overlooks the community. Paintings and weavings from the community have won major awards across the country and have been show in large museums both in Australia and internationally. The fine shimmering of these paintings responds in scale to Liu’s thin meandering line, and this pairing brings to the fore the content of the Peppimenarti work as opposed to their formal qualities. In much work from Peppimenarti the two dimensional canvas work relates to the woven nets, baskets and other useful objects; the community is considered to be one of the foremost groups of Indigenous weavers in the country.

The Theresa Lemon’s are perhaps the lynchpins of the entire exhibition. Called ‘Weaving Designs’ they show how the very practice of weaving can inform other alternative practices, here painting. The nomenclature Lemon uses is even reminiscent of Western knitting books and again opens up interesting resonances to other weaving and knitting practice.

Tjampawa Katie Kawiny is a Tjala elder. The Tjala Community (in the region near Amata in the far north of South Australia) is also known for their contemporary weaving, often effigies of animals, camp dogs and other members of the community. Are these paintings an extension of this practice? What is the conjuring ability of two-dimensional representation over the effigy?

Tjampawa Katie Kawiny’s work is characterised by a bold use of colour and pattern. In this show the movement between the abstract and the representational, and the transformation of traditional forms is evident. It is an honour to be able to show her work for the first time in Sydney and we are planning on bringing a more thorough representation of Tjala Art emerging artists in 2009.

Kate Just’s ‘Homeward Bound’ video series is a curious tangent from her body of work, which generally involves large knitted sculptural pieces and installations, such as her a large scale knitted interpretation of the pink fountain in Bosch’s Garden of Earthly Delights. In these video fragments, filmed over 8 years on Just’s return trips to the family home in the United States, we see small family moments; her father drives a car through a snowstorm, her mother knits, dogs wander through the hallways and her grandmother and father discuss the contents of the fridge. These fragments of Just’s travels home are ‘bound’ together in this 8-minute video.

Also included in this exhibition is Ruark Lewis’s ‘Signals V’ , a woven ball and demarcated stick. This is one of Lewis’s ‘decoys’ from his Index of Kindness project – these decoys use form and striking colour-contrast to draw the viewer into a complex web of concrete texts, sound and performance which is derived from cross-currents of signals of language conflict. Lewis often uses flags, cotton, wool and other soft and common materials. Included here, this object opens up a pathway to Lewis’s larger project.

Zoran Strbac work continues in an experimental vein similar to the practices of Peppimenarti. Strbac has taken the craft of wire weaving and sculpture and coupled it with the Belgian linen of high art. The use of wire, even silver wire, creates a tension between the ‘femininity’ of textile crafts and masculine ‘hardware’ (although this work is the luxurious silver version earlier works used galvanised steel straight from the Bunnings shelf). The subtle patterning further relates to the high modernism of Mondrian and other hard-edge abstractionists.

In Nicholas Tory’s video work entitled Berlin Prague Mexico, photographs have been animated and altered through digital means. The images taken on his travels are then meticulously reconstructed piece by piece, colour by colour and layer by layer. The constant transition from one to the other gives a sense memory and time passing. Although formally the works seem tapestry-like it is the way Tory effects the fabric of the image line-by-line that connects him most directly to the practices of weaving narratives, places and memories together in artworks which is the subject of this exhibition.