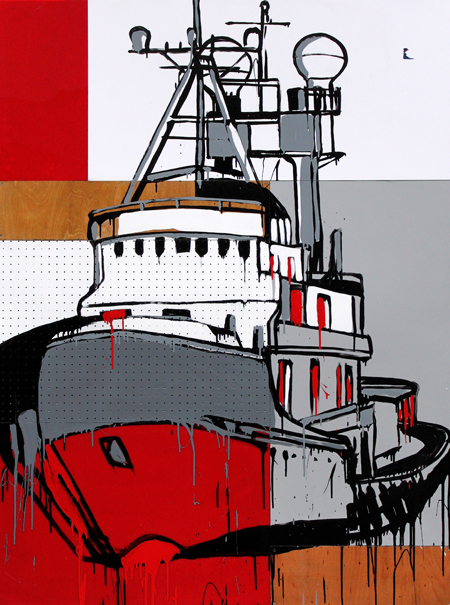 We have moved to a new premises!

Being on a boat that’s moving through the water, it’s so clear. Everything falls into place in terms of what’s important and what’s not. – James Taylor

Boats are romantic objects of aspiration and fondly held memories; cruising harbour-side with the salt air breezing through one’s hair; it’s something to aspire to, a millionaire’s sport, and the most expendable of desires once quenched; indeed, the recreational marine industry in Australia is worth around $5.5 billion each year. “A rising tide lifts all boats” goes the old economic aphorism yet during the GFC The New York Times reported on a number of glorious recreational boats having their name and registration scratched off and being abandoned to become nothing more than waterway hazards.

Knight’s latest body of work takes its inspiration and subject matter from the annual Sydney International Boat Show – an event that has been running since 1968, and is regarded as the southern hemisphere’s most recognised consumer event. However it is not merely a spectacle during which the biggest and boldest vessels are proudly displayed, but rather it is a commercial showcase and profit factory. Knight is continuing his visual essay that saw him visit this theme in his 2010 body of work; A Great Big Beautiful Tomorrow, that drew its content from the 1964/65 New York’s World Fair – a presentation of an Utopian vision of modernity from architecture to cars and technological marvels. These fairs present a high point in faith and hope for the future in the face of a cynical age, yet they also seem nostalgic for the glamour of times past. A time when yachting was exclusive for the rich and the famous; Teddy Kennedy, the Onassis family, Marilyn Monroe, Kerry Packer. What is summoned is a sense of prophetic emulation, yet an unquenchable wish for self-satisfaction through material objects dictates the immediate replacement of desires of grandeur as soon as they are achieved. Thus these water-bound, overarching economic squanderers that bring us so much joy and dreaming act as a reflection of our western social ideologies; highlighting an avaricious void as opposed to representing bountiful wealth.

Knight’s work engages joyously with life and modernity, and does so through an inherent understanding of his materials – enamel, Perspex, masonite transcend their industrial purpose to morph into paintings that lie somewhere between construction and collage. Knight is an heir to the post-Pop artists who revel in the artefacts of contemporary life from urban landscapes and complexes to sports cars and highways. Continuing the lineage of Jasper Johns’ flag paintings and Robert Rauschenberg’s Bed, Knight’s practice transcends mere representation, and instead forges images born of incorporation and an investigation into materials, process and construction. In conjunction with the industrial media and vintage signage assemblage, a distinct reinterpretation of constructivism is thrust to the viewer with clear post-Pop intentions; merging the paintings from a two dimensional plane to reveal a constructed object darting between the material and the subject.

With this neo-Pop aesthetic, the heralding of icons of modern life brings us to consider the implications of these luxury items, their broader settings and environments. The Arctic P, is a 288-foot former salvage tug with a tough, ice-hardy bulkhead. Media and gambling mogul Kerry Packer bought this sturdy tugboat and transformed it into one of the most indulgent luxury yachts in the world. This novel, and perhaps slightly bizarre appropriation of a vessel used to rescue other ships is an apt example of the bespoke world of boating. Knight renders this beast as a glorious monument and yet usurps its intended power by animating it in an object bound plane; this symbology is inverted again through the resolution of colouring as principally red, traditionally a colour that represents blood, energy, war and strength to invoke the awe inspiring supremacy of not only this boat, but the Packers themselves. Our perspective of the boat is cut off as if it were too big for our eyes, trimmed at the edges of the picture plane exaggerating the grandiosity. The organic element of water is replaced with wood disturbing our association of man made and the natural. Thus the work becomes like signpost heralding our culture where images are all that matter, how they are shaped, layered and resolved reveal our manufactured fictions.

The Replica Endeavour1988 is an Australian-built replica of Captain James Cook’s colonial vessel that delivered him to the “unknown southern land” – a ship that travelled across the world, chartering new territory and founding new lands. Ironically, despite the epic voyages made by the original Endeavour, the ship finished its career making menial crossings, transporting Navy stores and foodstuffs before being scuttled off Rhode Island and ultimately retired to a watery grave. Largely forgotten at the time, it has now been rebuilt with astute accuracy at great expense; initially funded (but then withdrawn) by Alan Bond, and then patronised by Weston Foods and John Singleton, to be proudly presented as a feat in maritime reproduction. The picture itself harbours powerful harsh black line-work that appears to drip away as it moves towards us, extending beyond its two dimensional constraint. Knight’s signature primary colours offer a graphic distinction to this colonial vessel, lending a permeable character to the doppelganger of the great ship that discovered ‘the lucky country’.

By eternalising images of ultimate marine life through powerful representations of pinnacle vessels of our history and maritime national experience, Knight draws our focus to the human conquest of nature’s unyielding ocean; giving our planet life and drowning men in the same breath. The architecture of these vehicles stands for the glory of man in generating these aesthetic wonders to orchestrate trade routes once upon a time and now, for the most part, recreational cruising.