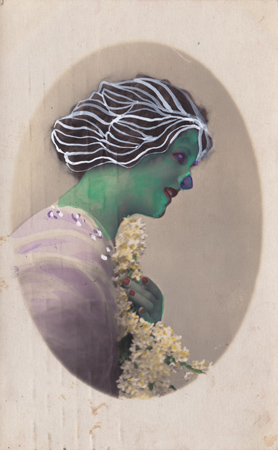 Tara Marynowsky’s work comes from a personal and imaginative place. Her work is small in scale and intimate and feels as if she has quite easily just manifested a daydream. Over the last few years Marynowsky’s images have been a working through of her shift into motherhood; many of the works in “Venus of Venus” relate to that theme. The paintings express motherhood honestly and poetically. On one hand there is maternal love in these works, a revisiting of the mother’s role in its traditional romantic guise. But on the other hand Marynowsky also sincerely addresses the fears and worries surrounding caring for a child and indeed the need to maintain a sense of (non- maternal) identity. The monsters and spectres in these works then are multiple but conjure what Renata Salecl calls the natural “anxieties of motherhood.” The mother herself is a monstrous superegoic force (think the mother of all mothers in Alien, or Louise Bourgeois’ Maman). The child too represents the scariness of pure fragile life. Can we hope to live up to these expectations?

Marynowsky’s influences range from Odilon Redon and his beautiful, soft pastels to the quick conceptual sketches of Tracey Emin. The line that links these poles is an interest in the poetic and the imagination in a Symbolist mode. What characterised the Symbolists and their contemporary legacies is the reliance on personal symbols that come from the artist rather than some symbolic code book. The Symbolists also insisted on the medium speaking for itself and conjuring much of the force of meaning. In Marynowksy’s work the deployment of the softly chalky gouache and the ghostly fluidity of watercolour add to the instability of her images. The viewer can read their own dreams in her work.

The water-colour series “Venus of Venus” shows this instability and uncertainty of symbols most obviously. In “Venus of Venus 3” for example there are many different ways to read the image which I would only begin to touch on; in the end the meaning is up to you. However tentatively is the little monster on the left intact a child with up stretched hands? Is it a devil’s mask, as we have seen in Marynowksy’s previous work, borrowed from some carnival fiend. Is the soft, pink nude a sympathetic mother or scared by a monster offspring. There is much tenderness in these images but also complexity. The childlike nature of the illustrative form also points to the negotiations of the nursery.

Although there is something of Surrealism in these works I think it would be wrong to focus on just the uncanny and the dream in these works. There is a sophisticated play of symbol, painting and art historical allusion. In Berlin for example the traditional portrait pose, here borrowed from painting by early photography, still strongly asserts itself. The flowers are held to the heart in iconography you would expect from a Renaissance altar piece. The postcard is a keepsake, a love letter, that insists on its seriousness and its special domesticity. At the same time the image is declassed. The green skin, like the Witch from Wizard of Oz, the skull like make-up, the painterly reworking of the hair, all point to the failure of the photographic real and towards the “Spirit world.” What is powerful in Marynowsky’s work and what makes it contemporary is that all these modes exist at once, without hierarchy. Unlike Picabia, Ernst and the collagists who have come after the point is not to totally undermine the Edwardian sensibility. On the contrary it is to keep it in play as part of the make up socially and historically of what it is to be a mother. 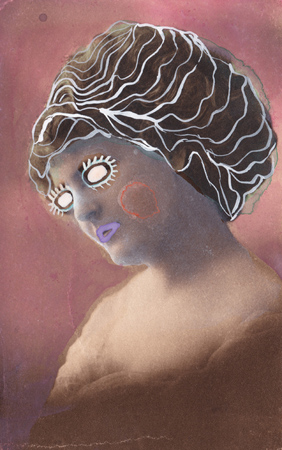 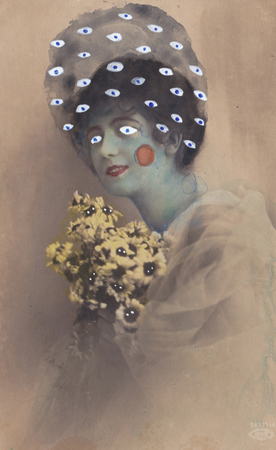 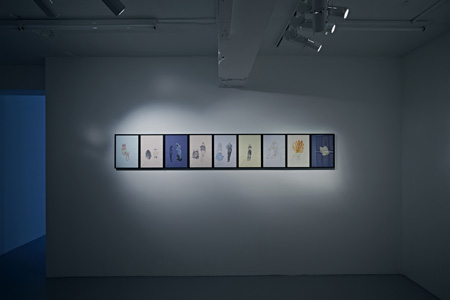 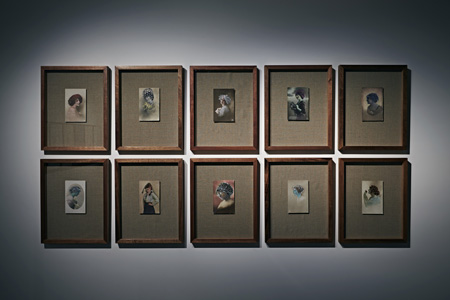 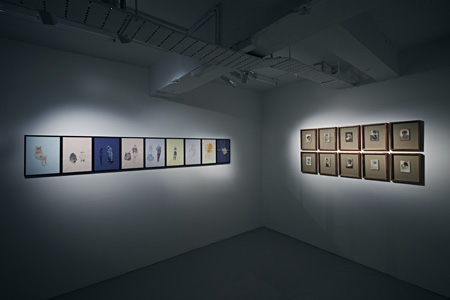