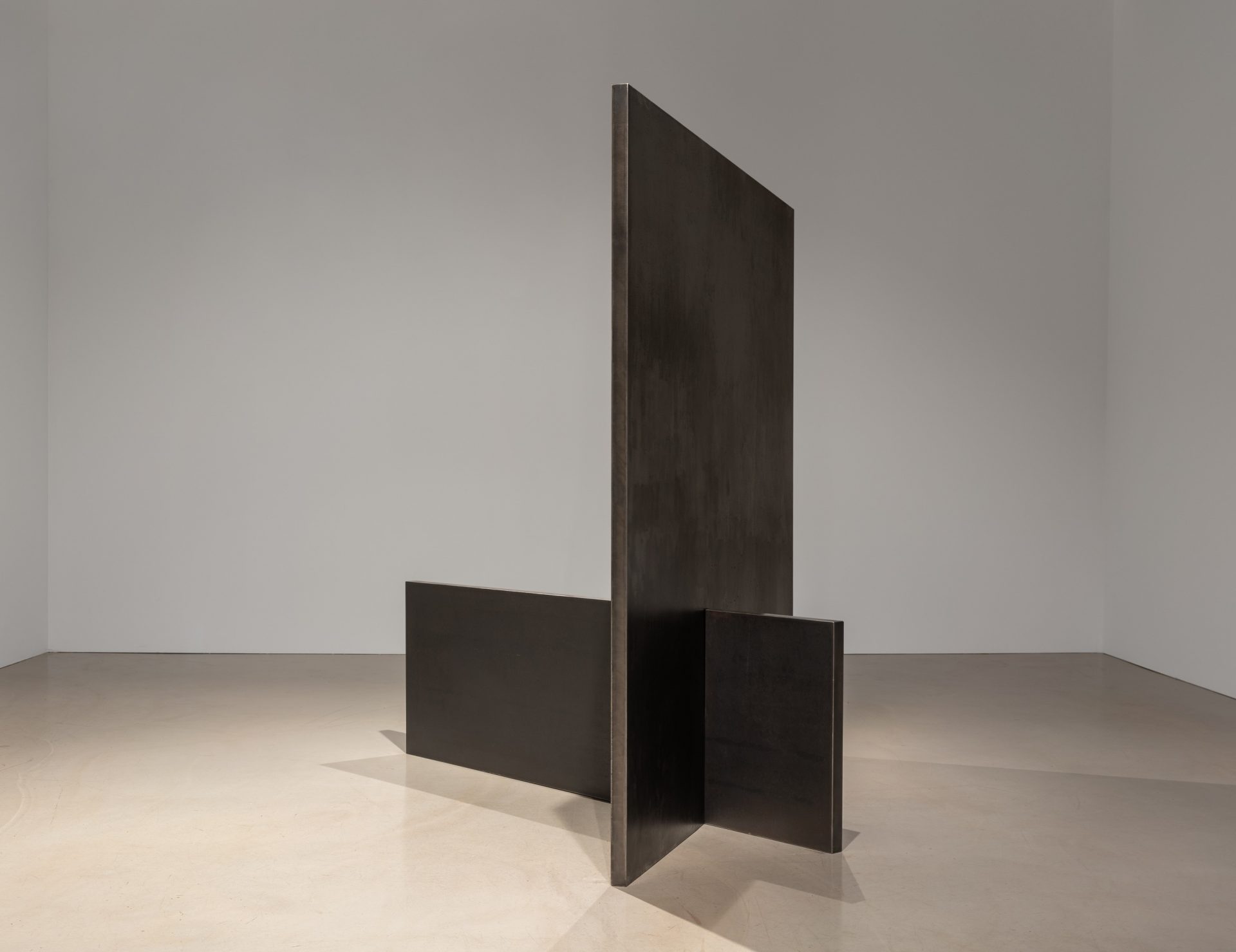 The work ruminates on time itself.

The inescapable, ever present, yet so fleeting, passing of seconds, minutes, hours, days, weeks, months, years, decades and centuries.

The subject is weighty, in some minds foreboding, and yet for others (certainly the artists), not so much. The value of time is that of how we use it. Time, like an intangible currency, not one you can ever redeem or reinvest. Its worth lies in how it’s used and whether it’s spent wisely or squandered.

Every lifetime is a transit. How each of us travel respectively along our path and where these paths connect with others, there is nothing static in transit, only the pace and orientation fluctuate.

Herein lies the poetic. The work ‘Transit’ reveals to us a ribbon of time circumnavigating a confrontingly large mass of crisply cut steel. This ribbon, the 32mm width of the steel, disappears as it intersects the second, three times its size, then the ribbon seemingly returns perpendicular upon the edge of a new steel surface. Two ribbons entwine within the one object comprised of two parts, alike but in opposition, of different scales yet sharing some of their dimensions. They are absolutely dependent on one another to remain upright. Although not a singular, they are bound together.

Slotted with precision and balanced in tension, the work has an austere quality as the two opposing planes divide space and delineate their surrounds, light and atmosphere. The scale of the work is a bewildering and unavoidable preoccupation, its sheer mass is potent and actually awesome, brimming with both gravity and gravitas.

Lifetimes are like that, not often able to sustain solitude. They are dense, heavy with intention, filled with potential to thrive or topple at any point.

The work ‘Transit’ weighs as much as a 1969 Mini Cooper S with the artist at the wheel. The irony of a work this heavy, named as it is, is not lost. It takes serious logistical effort to shift such an object, precarious and potentially lethal. It takes incredible energy to work such a material, to move such a mass and to cut or change steel like this.

Minis are assemblages of thousands of parts that roll, combust, exhaust, shift, rock, house and hurtle four wheels and several passengers anywhere they desire. An iconic symbol of speed, fun and freedom. The steel is processed, drawn, forged, rolled, heated, pressed, spun, welded and beaten to realise its potential as a vehicle, and a very light weight, economical and successful feat of engineering.

Transit comprises almost raw, under utilised material straight from the forge. Crude, cut, blunt and cold. Processed iron ore extracted as mineral from the earth, heated to extreme, liquified and poured into a slab to cool in the form we see here.

It is loaded with potential, filled to the brim with possibility. Although this steel was never produced with an artistic intention in mind, its utility is paramount to its production. As a simple road plate, this steel’s material intention would be realised to punctuate traffic as cars clear caverns beneath it. A tiny bridge in a road, barely noticeable as you bump ever so slightly over it. In the gallery, the steel lives a luxurious life, one it never anticipated, the context allows it to be regarded anew.

Potential is significant to the work ‘Transit’.

To the artist’s mind, the work is as much about how you move through time as it is about the march of time itself. The artist is reflecting positively, affirming the value of experience of life, celebrating every tear and scar, triumph and savoring it. Still, the gaze is to the horizon, excited to move forward willingly with a hunger for more. Even a resilient cold slab of steel will not survive a lifetime intact. It will live as we all do, revealing its life upon its service as it tarnishes and changes.

Rocket sees his own transit in the smaller of the two steel pieces, intersecting with a greater potential. Like a seven inch vinyl single spliced into its respective 12 inch LP album.

It would be easy to draw comparisons with artists who work predominantly with massive heavy steel structuresspringHowever, this work marks a significant milestone in it’s, which has engaged with a variety of materials to date, including. subtly alters the obvious of an object, to prompt a reading all our own.

The artist wishes a special thanks to Sarah Contos, Mark Pokorny and to Matt Newburn at Eveleigh works for their help and support in making Transit.