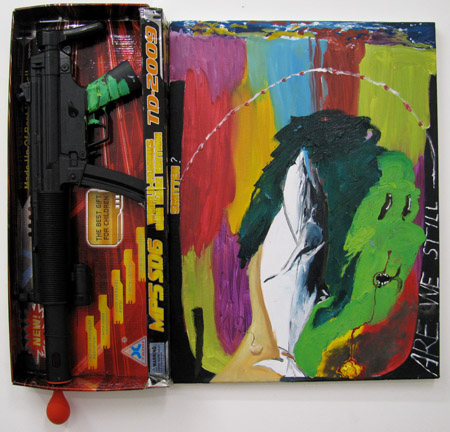 Toy Paintings is a body of conceptual paintings by Fergus Binns that question the position of painting and our collective store of images. Binns borrows from history painting, sacred painting and the icons of art history (see Claude Monet’s signature in Toy painting – d-d-d-drop); regardless of this borrowing from literary and narrative painting, Binn’s work does not make clear sense. The work is as much about what the viewer brings to the work as what the paintings represent. In fact Binns is quite against room sheets because they become too prescriptive.

For example in Toy Painting (fountain painting), Jesus is coupled with a chimp who seems to be clothing a man. It is an image of wide resonance. A few weird readings may suffice to suggest endless possibilities: is the chimp in our imagination Bubbles who turns Jesus into a Michael Jackson style lover of animals; is the bird and the grapes biblical or an annoying bird at an Aussie picnic; is the man in the chimp a comment on man’s primal animality, Darwinism or infantilism in the eye’s of God. Binns has called the work an altar but an altar to what?

The work continues Binns’ eclectic style, which was feted in the Primavera Exhibition and as a winner of the Metro 5 Award. In this most recent work though, the eclectic styles have been brought together seamlessly on one unified picture plane. In Toy painting (Christmas Island figure), the giant/colossus comes from a children illustration book, loosely painted to replicate its watercolour approach. In contrast stylistically there are hidden slaves in the boat, absolutely tiny, look closely, staring at the viewer (asking for help?). Miniatures are dotted around the works and the works reward those that view closely.

Finally in the suite of Artist Canvases Binns celebrates the two dollar shop canvas from China. In painting there has been a split between the amateur and the professional. If Prince Charles is a watercolourist it is only because watercolour is the medium of aristocracy; oil painting is for the professional artist/worker. Binns’ work seems scarily familiar, with thin plastic covering but underneath the two dollar canvas is pre-painted, almost as an extension of the weird imagery on its front. In Artist Canvas (92 x 92 cm) the work shows Jesus on an i-Phone and this again is a detail for the chimp on the rope that also holds the i-Phone. The girl’s face is a detail of the girl bellow. This work shows how meaning and images race around in our society referring to each other not only on the canvas but within our hyper-stimulated, mediated world.

Are We Still Smitten?

Invaders of the Lost Art