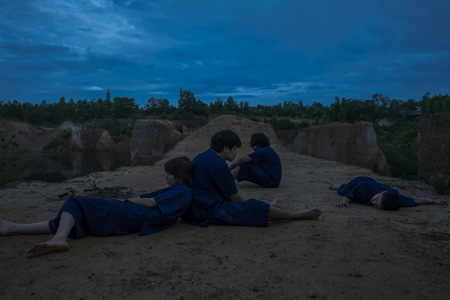 Sam Doctor’s video installation ‘The Return’ continues his elegiac responses to the landscapes of South East Asia, emerging from the year he spent in Thailand in 2014. In earlier work, Doctor captured the brutal physical labour extracted from mine workers in Indonesia in images reminiscent of Sebastiao Salgado’s monumental photographs of Brazilian gold miners. Here, large-scale mining, with its devastating human and environmental effects, is again present but it has occurred off screen, in another time, setting the scene for the action. For, what Doctor evokes is the act of mourning for country.

The Return takes us to the Hang Dong Quarry near Chiang Mai. Originally a soil quarry, the mine has long been abandoned, in the intervening years filling up with preternaturally turquoise water that contrasts with its carmine crags to exquisite aesthetic effect. Its picture-perfect qualities have recently garnered the quarry renown as a destination for intrepid travellers; it is vaunted as an out-of-the-way swimming hole and great place to watch the sun set. On travel sites online, drone footage sweeps over its chasms, ridges and rippling water, an archetypal example of the tourist gaze.

Yet, Doctor reminds us that for those to whom this land belongs, Hang Dong is a site of trauma. Doctor has also captured footage with drones — a technology whose sinister origins are apposite, and whose presence is highlighted in Michele Vescio’s soundscape. However, the drone’s images are not used to entice and titillate, but to commemorate loss. At first, the scourged land appears unpopulated, its beauty almost too much in the slow vision of the floating camera. But the perfection of the drone’s distanced gaze is soon disrupted by Doctor’s change of perspective, as we begin to see this place through the reactions of the ‘returned’, four figures who represent those dispossessed by the mining enterprise. Doctor has choreographed local Thai actors to embody the acts of witnessing and sorrow; the figures stand separate but together, their gestures and expressions conveying the struggle to comprehend mining’s toxic aftermath and the intimate connection between destruction of country and desolation of self. Doctor’s images are unerringly beautiful, the form and colour of the landscape in exquisite balance with the actors’ handsome faces and graceful, blue-clad bodies.

It has often been asserted that beauty aestheticises horror and keeps us at a remove from pain, and hence is ethically questionable as a response. Yet it is nonetheless true that beauty has for millennia and across cultures accompanied experiences of tragedy as a solace to the bereaved, as a dignifier of loss, as a gesture of conciliation. In The Abuse of Beauty, the late American art critic and philosopher Arthur C Danto, in arguing for the role of beauty in experience, cites the Prophet Isiah: ‘Give unto them beauty for ashes, the oil of joy for mourning, the garment of praise for the spirit of heaviness’. In reaching for elegiac beauty in The Return, Doctor offers a space to imagine the loss and desecration suffered by both human and non-human life as a result of the short-sighted instrumentalisation of this particular place, and by extension, of the Earth more generally. While Doctor’s work is site specific and made in response to his long-term residency, we know that forced expropriation and displacement of small communities, and contempt for the need to restore and rebuild after the ‘wealth’ has been extracted, are constants in the history of modernity and colonialism. The beauty of the art creates this space for imagination in counterpoint to the misleading beauty of the mine’s remnants that cover over human and environmental damage.

The Return offers us a moment for reflection, to think on the connections between land and self, between North and South, and to mourn what can never be regained.

And then there was nothing

Sorrow will come in the end