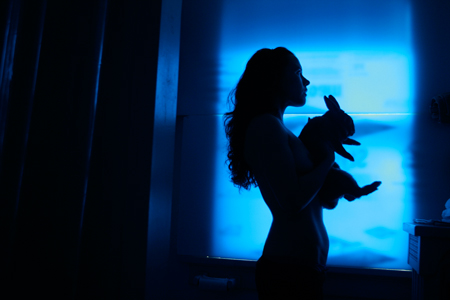 Since 2002, the narrative of Nakadate’s work has consistently been positioned within the void of the lives of the lonely. Often targeting single men, much of Nakadate’s work seeks out the stereotype of the solitary bachelor, aligning herself with this group whose “biggest crime is being lonely… who keep to themselves and have a hard time being social”. Much of her work displays the loneliness of others and in the process of her exploration; she turns the mirror on herself. In the Fever Dreams series she embarks on a month-long train journey around America, staying in Edward Hopper-esque hotels, engaging in awkward encounters with strange men in both distant and disconnected tableaux as well as intimate games of role-play. These assumed and pseudo-situations transgress the discomfort of loneliness, avoiding mocking the aloneness of her subjects but rather empathizing with their solitude, and documenting it through video.
Nakadate is simultaneously the actor, director and actress. She is playing out a role that she has written, and she is also turning the camera on herself. How much can be read as truth and where do we interpret it as fiction? She is omnipotent, and her works present a fictionalised documentary; the people are real but they are playing out a role, whether it is written or not, as they follow the lead of Nakadate the director as well as Nakadate the actress. Her guidance of the subjects is both a constant in the hypothesis of social experiment but also an unknown as her subjects are intertwined in unchartered dramatic territory. What we are left with is a kind of visual truth fused with narrative fiction.
Nakadate forces us into a position where we, as viewers, are called upon to question our ethical stance – contentions over whether this female performer is a feminist or a self-exploitative narcissist. Whether scenes of her flashing her breasts out of the window of a moving train speaks of a binary seduction between the microcosm of the individual and the macrocosm of the rolling landscape. Whether her urinating on camera is really a “little exorcism”, the physical eviction of something toxic, a liberation, or if it’s just launching an offence to shock us out of our daily domestic banalities.
Despite the force of their content, Nakadate’s video works still rely on the power of aesthetics, both of the scenery that she selects as her stage, and the beauty of the artist herself. Asked about her tendency to be naked, or close to, Nakadate says of her works; “(a)it makes them a little bit dirty, (b) it makes them a little bit pathetic, and (c) it disarms people to the point where they think that I am not going to be able to control any situation and am probably pretty vulnerable, which nine times out of ten I turn it around so that I might be the one half-dressed but I’m not going to be the underdog”.
Laurel Nakadate’s agency over her work is played out through both her binary presence as artist/director, as well as through her physical authority as an attractive woman. Beautiful Places to Hide a Body or Make Out (Romance) plays out this notion of artistic control through a text that is read out by Nakadate and then repeated back by an unknown, faceless, male voice. The captive is simultaneously the captor, and the seduced is the provocative force in her own seduction. The disconcertion felt by the viewer stems from the reversal of roles, of the female voice leading the male into a distasteful one-way dialogue teamed with footage of dark corners of a car-park, a drive-thru fast food chain and other generic scenes of American suburbia.
The power of Nakadate’s post-Feminist riddle in her video and photographic work leaves us with a resonance of intensely personal encounters, both with others and with the self. These encounters are confronting, tainted with sadness and framed by the voyeur: challenging our notions of what we are entitled to access within a heavily mediatised world.
Kat Sapera
*All quotes taken from an interview with Laurel Nakadate in The Believer, October 2006