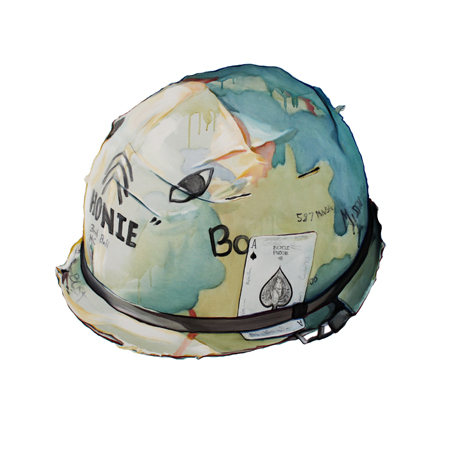 One Saturday morning at Rose Bay in Sydney, 15 topless men some bearing headdresses, carry a shrine made out of beer boxes and embellished with gold wrapping paper into the ocean. After about an hour, a bystander asks “Are you making a commercial?” Response: “No, sorry, it’s for an artwork.” Bystander walks away deflated and confused.

The festival scene created by Julian Meagher was a restaging of a Japanese Mikoshi ceremony; a Shinto tradition whereby the spirit of a god is transported in a palanquin, dipped in water, and then returned to its resting place. Articulating this within an Australian framework and with a dash of humour, Meagher replaced the house of the gods with a house of beer and created first-hand content for a series of paintings. The iconic Victoria Bitter is heralded through this festival scene, and idolised in other works through its individual portrayal, and again through its incorporation into domestic scenes on Chinese ceramics, where a slab takes its’ place within an archetypal picnic scene. In his mini-series of Ming vase paintings, the surface imagery resonates its source – both in content, and its glazed finish. What we are left with is a multiplicity of imagery: a painting of a painted surface. This reworking and reimagining of an existing image also applies to Meagher’s clinical observations of tattooed skin, and of Vietnam War era helmets decorated with graffiti from fellow soldiers.

Meagher’s fascination with tattoos has multiple points of attraction; the ritual, the aesthetic, the cross-cultural adoption, the permanence and the story behind each piece – whether that story be factual or imagined. Over the course of time, tattoos have become distanced from their criminal, maritime and gang associations and have become a metaphor for difference, a means of individualisation, particularly in heavily overpopulated societies. The ritual has transformed, it is now removed from marking oneself as a means of belonging to one tribe or another, instead assuming a purely aesthetic role; a visual reference to a moment in a personal history. The art of tattooing has been adopted as an expressive vehicle within popular culture and marginalized subcultures, and this adornment for the sake of adornment has come to demand worldwide prestige through branding. As Captain Cook said in 1779, “The universality of tattooing is a curious subject for speculation.”

Whatever the featured tattoos represent or signify, Meagher has removed them from their diverse and complex histories and presents his subjects as isolated visceral designs for our contemplation. A series of paintings of knuckle tattoos show clenched fists suspended within the canvas, devoid of personal or cultural context, with the tattoo as the only indicator of its own story. Often text-based, and with a distinctly punk aesthetic, knuckle tattoos tend to withhold an intriguing or humorous history; for example the story of a man getting the initial of his wife tattooed in the place of a wedding ring, only to later get divorced and subsequently end up with the words “HOT DOG” across his knuckles.

Meagher’s paintings embody a synthesis of density of content and layers of meaning, balanced with a thoughtful and clinical presentation. They oscillate between presence and absence. What is left for us to process is a porthole to glimpse at instances of cultural reckoning in both intimate personal chronicles and broader historical contexts.

You Can Get it Any Old How I