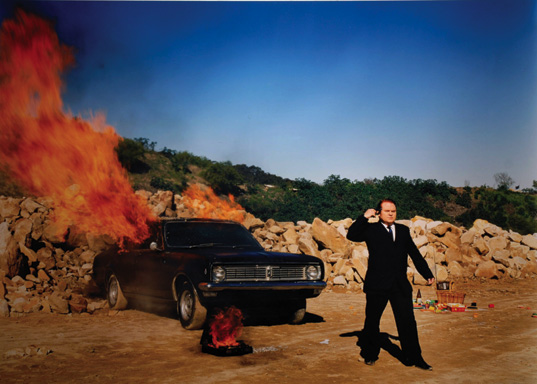 ABSTRACT- Screen Test (Americana/Australiana) Aberrations of Self: Manifestations in Cinema History The Screen Test (Americana/Australiana) project is a collection of works that re-makes selected fragments of film spanning cinema history. Through a process of selectively slowing and stilling this form, of what Laura Mulvey calls Delayed Cinema, opens up new possibilities for interpreting and understanding cinema and the photographic. The aesthetic qualities and repetition of the scene or shot are re-created and re-performed, allowing an alternate form of cinema to take place. This alternate cinema takes on the characteristic of the Hollywood screen test and thus we can see each piece as the artist performing the screen test for each film. However, over time the screen test becomes the site for shifting the aesthetic elements within the film and shaping the narrative as a form of aesthetic building block. The viewing of each fragment allows for a new reading of film that suspends or subverts the temporal narrative and allows the contained segment to exist outside of the film opening up the possibility of constructing and emphasizing new iconic images and meanings. Each video piece is supplemented with a photographic still in tableaux form that further explores the aesthetic material of the film or shot raising the aesthetic components of the film ( props, locations etc) to the level of fetishism that may have been missed in the original version. This photographic rendering of the film fragment rethinks the possibilities of photographic tableaux and its relation to the iconic and indexical of photomedia art practice. Similarly, each photographic work is informed by theories of film analysis and psychology that has examined the primacy of the film still with Freudian notions of the primal scene and the uncanny. We are after all bringing to life the graveyard of cinema history. These photographic qualities of the mis en scene and the indexical of metonymy allow a heightened aesthetic experience, which transforms itself into an aberration of the director’s intended meaning, thereby reconstructing this meaning within the context of camp humor andirony. The work also acts as a playful and absurd interpretation of the cult of celebrity within cinema and the art world, which frees up of the interpretation of the film’smeaning and becomes the site for contemporary re-readings of film culture.

The juxtaposition of the American Hollywood film and its emphasis on studio lighting, props, character and dialogue against the outdoor location of the Australian films conflates the two cultural imperatives, allowing for the examination of cultural myth through cinema. American cinema is revealed as the dominant culture whose imperialism dogs Australian film history and fosters a culture of low self-esteem.Further, the Americana works become the site for cultural examinations of gender, narcissism and war – both real and imagined – and Hollywood is explored in terms of its social imaginings and how they play into real life events. The Australiana component explores the mythology of the Australian landscape with an emphasis on the culture of masculinity and self-destructive violence. However, each work is the result of a conflation of both cultures and other films, or parts of the same film, shifted within the fragment. The production of each photographic and video piece requires the taking on of the role of director, cinematographer, actor and producer. Through the use of interactive technologies such as DVD and the Internet not only am I able to experience a new subjective relationship with the intricacies of cinema but also by recreating these cinematic fragments I am able to bring into being and transform the spectre of cinema into the realm of contemporary art practice.