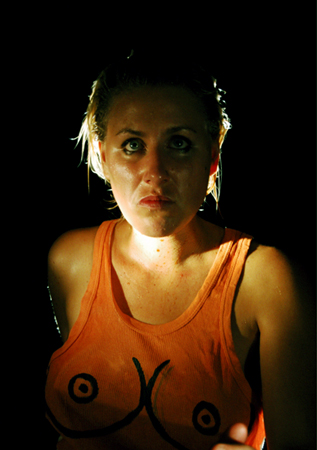 The eponymous Janie runs between two lanes of heavy traffic in the middle of the night. Her long hair flutters in the updraft created by cars as they scream past her. Steven Tyler’s labial contortions bare a trap of white teeth as he screams “pai-eai-eai-eai-eai-eai-eai-eain!” Janie’s body in flight is illuminated by the white headlights. We view her figure in silhouette as she makes her escape from unspeakable degradation: “What did her daddy do…?” Through filth, sweat and gouts of spilled blood (like her celluloid sisters before her) Janie is rebirthed as another action heroine of the late twentieth century, propelling her exhausted body forwards, towards the end.
Brown Council’s Runaway is the latest in the collaborative group’s series of videoed performances that extract well-worn, feminine narratives from popular culture. They are reworked, re-performed and repeated by the artists. And repeated. The lighting state described above in David Fincher’s music video for Aerosmith’s Janie’s Got a Gun (1994) is replicated by Brown Council, but in this work, the camera angle is reversed and focused on the sweating face and torso of each of the four luminous women in turn as they mimic in slow motion, the action of running-scared, as if on a treadmill – never getting closer to or further away from freedom or a destination. Trapped in an endless data loop that replicates the repetition of the video itself, the women continue to run.
Each sequence is choreographed to the same short soundtrack, reminiscent of John Carpenter’s compositions for his own films, relentlessly setting the pace for escapes and chases with monotonous, “inhuman” sound. Comprised of synthesized beeps and Giorgio Moroder-like techno drones, Runaway replays this unearthly sonic trope, evoking countless scenes of women fleeing from chainsaw-wielding psychopaths, ectoplasmic ghouls, salivating aliens, inclement weather or a zombified populace. As with Carpenter’s Escape From New York, sound is used as a “device for modulating tension” and also, in this case, signifies, along with the blood, the presence of an unseen other poised just outside the frame.
The repetition and narrative stasis of the running, action woman, baptized at first by a spurt, and then a bucket of blood is an echo of the logic of the remake – moving images reiterated in our own time for young markets, yet severed entirely from the social and political context in which they were originally filmed. No longer an expression of female assertiveness on the screen – agents of vengeance and destruction forged through psychic and bodily trauma – what remains of the post-feminist protagonist of the eighties and nineties is entirely corporeal; blood and breasts. As Brown Council state, “We have seen this all before,” from the floppy-haired, dowdy singleton and then pneumatically-enhanced Sarah Connors of The Terminator 1 & 2, to the indefatigable surrogate mother, Ellen Ripley of the Alien saga, Runaway retains from these scream-queens the dirty face, breathless demeanor, ragged t-shirt and fierce expression, just steps ahead of a relentless and malevolent force.