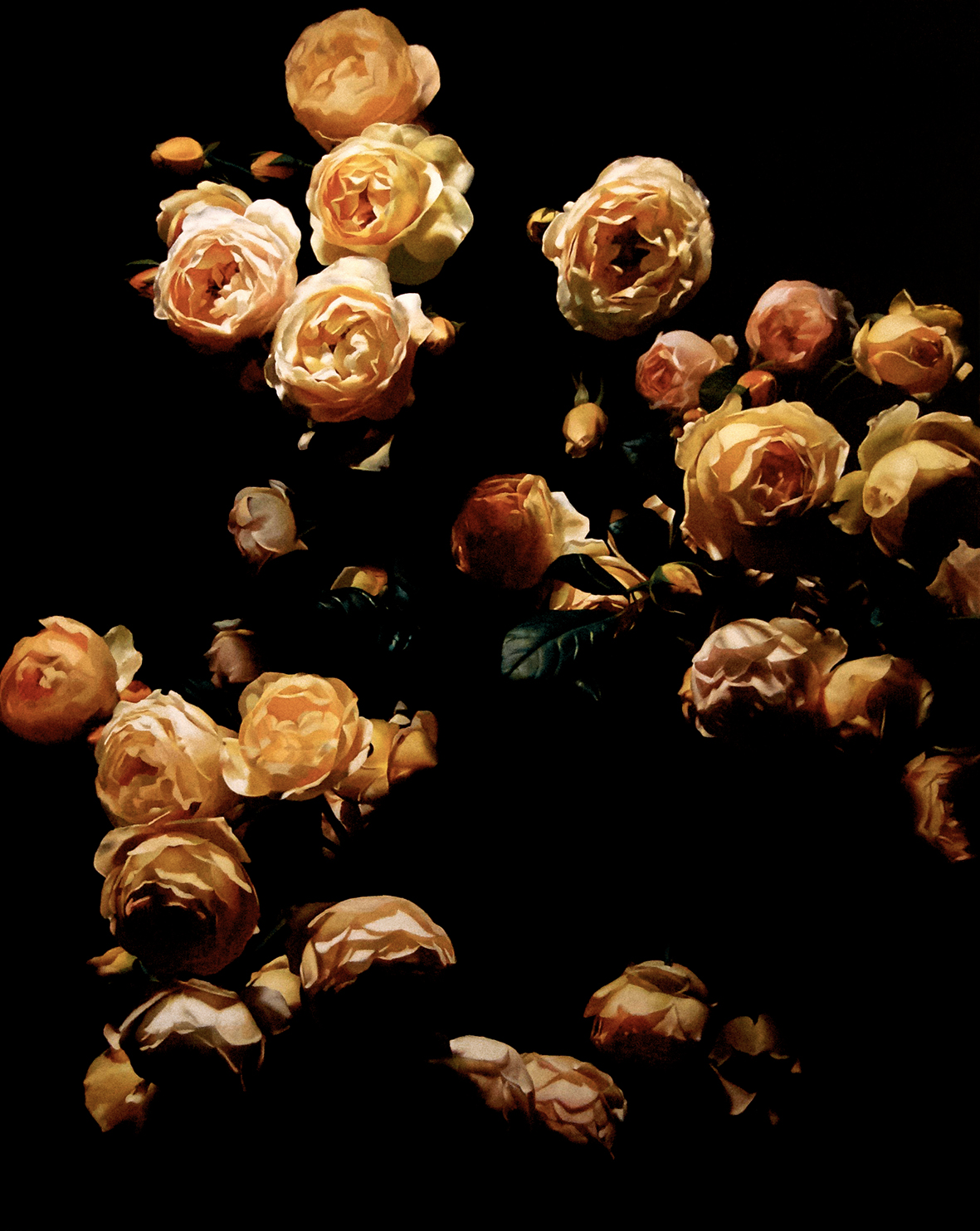 In the hierarchy of genres for art, still life was ranked at the bottom and deemed the lowest genre of painting for hundreds of years. This was until 1599 when Caravaggio came along with his Basket of Fruit and shook this perception. He declared that it requires as much artistry to paint flowers as figures, and he proved it. His actions were subversive but rarely do we view paintings of flowers or fruit and think of a rebelliousness that runs beneath the surface. Yet, great boldness and vision is still required to make the inanimate worthy of speculation: something must emerge that often goes unnoticed in its original context. That’s where light comes in.

Caravaggio’s distinctive chiaroscuro – the use of light and dark – gave his paintings their ardour and theatricality. With light, the artist can conceal and emphasise as well as dictate mood and feeling. If we think of sensual scenes we may recall how they are dimmed with warm light touching areas of focus or how film noir exploits shadow to create suspense and drama. The director is aware that in the transmission of emotion, lighting is crucial; perhaps that is why filmmakers such as Orson Welles and Martin Scorsese have cited Caravaggio as a direct influence on their work.

Alicia Mozqueira knows the importance of light and she wields it masterfully. Her images are enchanting and possess a frightening beauty, these qualities she renders through her incredible use of chiaroscuro. In this particular series, Mozqueira’s paintings depict a single composition of roses from her garden. While the roses appear in the same position in each work, the direction and colour temperature of the light source varies. As Monet studied the same lake view during different times of day, these paintings reveal the many faces of the same rose through shifts in illumination. In one work a rose is fully lit in and in the next, it recedes into shadow. However, Mozqueria does not capture light through traditional means by lighting the subject on set or capturing it straight from nature; instead, she manipulates light through the lens of a camera. She fixes the camera to one position and adjusts its settings  (brightness, focus, and colour temperature) for each new image that will later be converted into a painting. When placed beside each other, with their unchanging compositions, the works flaunt their digital origin and mimic the aesthetic of multiple fast camera flashes. They exude an effortlessness, but this effortlessness is an illusion, they are painstakingly produced. The artist often expresses a hankering to get as close to their subject as humanely possible. This notion plays throughout art history: the Cubists would portray many sides of the same form within a single work; artists of the Renaissance would dissect bodies to uncover the internal intricacies of anatomy, so they could depict the human form with flawless corporeality; the Surrealists conveyed the unseen reality of dreams. For Mozqueira this is perhaps why a single snapshot won’t do. But by getting closer to her subjects through repetition and a depiction so sharp they appear more real than the actual roses themselves, they trade off familiarity for a seductive strangeness.

In Mozqueira’s paintings the background is not a dark flat space, but deep, bottomless, and layered like the roses protruding from it. No longer are they ordinary flowers from a bush – the richness of colour and contrast of light shifts their innocence and imbues them with a dark sensuality. The same rose tempts us to follow it from work to work but as we watch each nuance gradually unfold, the flower never completely reveals itself. The elusiveness of the works speaks to the mystical roots of the rose and its symbolism of perilous secrecy dating back to Ancient times. There is a Latin phrase, sub rosa, literally meaning ‘under the rose’ which denotes this. In Ancient Rome, a rose suspended from a ceiling signified that anything which transpired sub rosa was not to be passed beyond the walls of the room. In the Middle Ages rose ornaments hung in confessionals and council meetings to remind guests they were sworn to secrecy upon hearing stories told under the rose. Each flower in Mozqueira’s painting maintains its ambiguity, providing only a glimpse of itself, a glimpse that fades beneath the darkness again. Dancing from painting to painting, the rose flickers in and out of the light, teasing its beholder.At the heart of Mozqueira’s practice is the desire to elevate her subjects to a state of utmost beauty. The artist says herself:

It is my experience that true beauty is an antidote to chaos. Now especially, I crave the things (paintings) which are archetypal, abundant and refined in their quality of beauty. Like gold revealed from the dross through fire, or an oyster nursing a grain of sand into a pearl, beauty may prevail through hardship. As a painter I think of creating in a similar way, taking unassuming pigment, and a plain surface and lavishing it with time, thought, skill and care.

Many things we define as archetypically beautiful in art, for example, Michelangelo’s David, or the Ancient Greek masterpiece Laocoön and His Sons required a mastery of technique and immense patience to conceive. Perhaps the pursuit of beauty is often tied to an intense study of subject, which requires much focus and attention. We can find beauty in everything if we take the time to look, and painting, drawing, and sculpting is a way of fiercely engaging with life. But what Mozqueira does is even more challenging: she takes an already perceived image of beauty and pushes it beyond its comprehensible limits, to a state of incandescence.