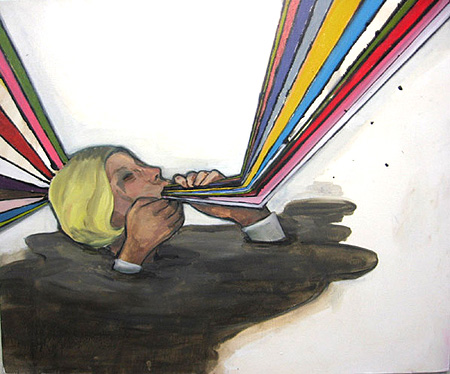 The works in Jelena Telecki’s Rekonstrukcija are part of her ongoing attempts to recover and re- examine memories. Much of her work relates to her experience of growing up in Yugoslavia. As Telecki suggests, “The need to go through this process [of remembering/painting] comes from the misfortune of living in a war struck country and being left with nothing but the photographs –the valuable, but the incomplete records of the past.”

Telecki’s method of painting is also connected to the processes of memory. The works embody the incoherence and incompleteness of our recalling the past. Much of the paintings are white or erased as if more is going on besides the main image, details are left out, and the works are dreamlike. After leaving Yugoslavia some of the most precious possessions that Telecki’s family left with were family photographs. Scanned and reprinted, the pre-war family snapshots are integrated with the paintings.

They are small pieces of the real, pieces of authenticity on the surface of Telecki’s personal and subjective images.

The subject matter is also intensely her own. In Eurovision Telecki explains:

In then Socialist Federal Republic of Yugoslavia one could watch many movies glorifying partisans, socialism, communism, our president Marshal Tito… On Sunday mornings we could watch the movie about Bosko Buha and Sirogojno – our child heroes who died defending our country. We would always feel guilty for having such an easy life and not having to fight for our freedom.

Eurovision contest was, on the other hand, easy watching. It was an event for the whole family and we would count days before the big day when we could see our pop singers competing against those from the West. We were always proud when our competitors look like they didn’t come from the East – when they were fashionable and likable.

Stuck memorialises those lost during the war and the helplessness of those left behind.

Rekonstrukcija asks questions about utopias and dreams. After Tito and in post-war democratic Yugoslavia have the promises of Capitalism, its lollypops and cakes, actually brought a better, freer life.

A fanatical obsession with extreme characters in American pop culture is exorcised in a manic frenzy of stitches in Raquel Welch’s ‘Fan Art’ portraits. “It’s a Nuthouse!” is a tribute series which could best be described as a ‘Hall of Fame’ of crackpots and lunatics, including Pee Wee Herman, Dolly Parton, Divine and notorious cult-leader turned killer, Charles Manson.

These works are like the relics of some sewing-bee or quilting circle meets middle American fan(atic). Lovingly stitched, lovingly (DIY) framed and then lovingly prayed to. They are meant to give reassurance, guidance and love.