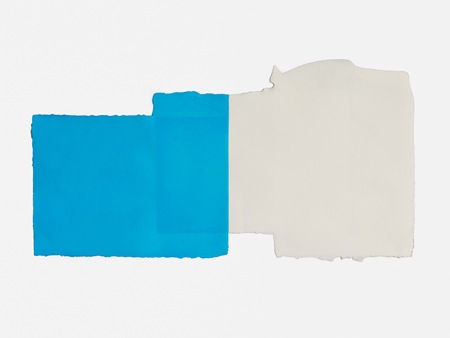 Mathew McWilliams distils conceptual and historical discoveries into formally beautiful artefacts. He often starts in the real world, with real things and records them, holding them in check for us to look again: he makes pastel rubbings of church frescos; he uses an old digital printer to make monochrome works with all the glitches showing; he uses paper to create sculptural forms which he then photographically represents on the same paper now printed.

His starting point for this series is familiar and an iteration of some of his previous concerns: our fetishisation of everything ‘new’. In a contrary move McWilliams sought out the oldest paper maker in Europe and found them in Fabriano at the Fabriano paper makers. This is a staple brand known to anyone who has ever made art and is commonly available at Eckersely’s or Parkers in Sydney. Not until McWilliams cast his cultural historians eye over it was I aware of the companies history. Stretching back to the 12th century the town and now the company have been producing paper in much the same way, through cotton pulp and by hand.

Fabriano had a place in bringing paper to Europe. Along the silk road and then mediated through Arabic artisans and traders the technology of paper making reached the west. The use of paper aided not only communication and image making but in the process helped create, or at least propagate, the very modern concepts of democracy, the individual and the educated professional classes. The material artefact McWilliams has carefully chosen and sought has this layering of history within it.

Indicative of his focus and material engagement is that McWilliams went to Fabriano to experiment and make the paper that is the basis of this exhibition. The surface anomalies and shapes are conscious decisions and a result of his own paper making process at Fabriano’s facility.

The dye used to colour the paper is inkjet ink. So there is a conflation of the old and the new, the analogue and the potentially digital. The use of dyes is also ancient so within this process is a view to both the past and the future. In the 2003 book New Media, Old Media: A History and Theory Reader, the authors warned against over reaching in our faith in technological progress. The “new” in new media is a recurring theme of many technological processes through history, from paper to television, to the internet. As a corollary of slowing down our drive towards the novel, the book also highlights that new technologies have the capacity to reclaim and redraw what we know of the old.

This conflation of time, this transhistorical looking is common to much of McWilliams work and is a driving theme of contemporary art’s fascination with time and history. We have thrown away the faithfulness of modernist progress and in its place replaced it with more doubt and uncertainty about how the world is travelling. As PULP shows this uncertainty does not lead necessarily to despondency or a lack of hope but to a complexity and richness. The hierarchies of linear time are done away with and Fabriano and digital printing can sit easily side by side.

Formally then it is no surprise that McWilliams, for me at least, references the look and experiments of post-minimalism. Post minimalism also attacked the utopian purity of modernist abstraction. Fitted into neat frames McWillliams’ abstract shapes, made by layering the paper in different ways, seem to fall apart and fray at the edges. The work of Robert Mangold (drawing a form inside a form) and Richard Tuttle’s small arbitrary mistakes and layering, come to mind in the way McWilliams counters the neat simplicity of the idealised paper sheet. McWilliams forms appear in the joining of the paper and the irregular edge of the hand made process also seems to soften the frame of the seemingly straight edge abstract approach. This work far from mathematical and artistic purity revels in the human touch and a very human cultural history.