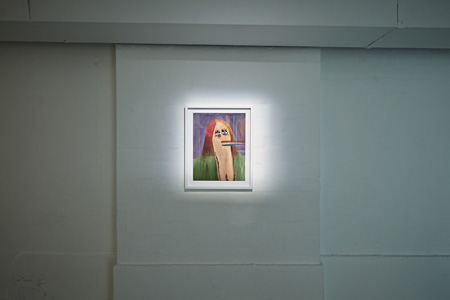 Amber Boardman’s exhibition Permission is a triumphant return to painting having made a (quite serious) sojourn into animation and soundscape. As part of this return Boardman has also returned to the things painting stands for: the individual author (as opposed to the collaboration of animation and other forms of art), a personal love of making and material, and an intimacy of form and subject matter. These paintings if they were a literary form would be witty aphorisms, diary entries that sum up the feelings, actions and anxieties of the everyday succinctly and precisely. We feel as viewers that we have been invited into Boardman’s studio and home, and indeed into the bedroom, walk-in-wardrobe, and shower cubicle; Boardman’s particular Intimism would make Matisse blush.

There are various modes at play in these works from the comedic to the grotesque but something that links them all is almost a Symbolist approach to art, think Edvard Munch if he wasn’t so melancholy. For the Symbolists the working method involved starting with an idea or a feeling (an abstract concept) and then finding in paint or poetry a way of accounting for that emotion. It was important that this symbolic language not be received or classical (a rose is for love for example) but highly personal and found in the real world. It is this approach that finds its culmination in Surrealism (Dali’s melted clocks, and Magritte’s floating business men). In Boardman’s work though it is closer to a contemporary Symbolism, stripped of the modernist’s high seriousness and earnest pursuit of a realer real. What makes these works contemporary is that they seamlessly hold in them a number of styles and genres: from Walt Disney to Philip Guston, from the comic sexuality of Carol Dunham (Lena’s dad) to cosmetic ads, from caricature to tender love notes.

For example Golden Shower, before you see the gestural pubic hair and yellow trickle recalls a hard edge abstraction. The colour theory is a little off though for a modernist and instead we get the slightly different shades of skin of a man and a woman, with one of them peeing on the other. The skin touches closely though like a Barnett Newman zip line. In this image that conflates art history with sexual proclivity, Boardman has created a zinging new metaphor for love and trust (not a particularly easy thing to do). Perhaps the boldest construction of love is Combined Sweeties, where Boardman has constructed an androgynous double part her, part him, part soccer player (him) part nude Venus (her). Stylistically though there is an interesting play in tropes of gender (colour markers like pink), and more mechanical hard shapes against the soft (the angular soccer net, versus the rounded flesh); in this work the gender norms and stereotypes never land and remain open.

The utopianism and optimism of the show is tempered though, by a darker tone. It is not a surprise that Boardman sums up a feeling of Odilon Redon, a leading Symbolist painter of the 19th century, “I have a feeling only for shadows.” But on the other hand Boardman is full of humour and the rapier sharp put down. Lips n Tits is a wonderful summation of contemporary society and a woman’s place in it. In Innovation in Make-up the application of make-up is directly conflated with the work of an abstract painter; based on one of Boardman’s day dreams it asks facetiously: “How would Pollock have applied mascara?”

Although perhaps beginning in the private space or mind of Boardman in the end these manifested visions and thoughts become for all of us. It is the fact that we share this understanding somehow that makes art meaningful in general and makes this show so successful. It is a fiercely honest exhibition that shares some hidden secrets, as well as laughter and celebration. It asks for a generosity of spirit in return and for the viewer to riff themselves on what these strange creatures and stretched forms mean to you. 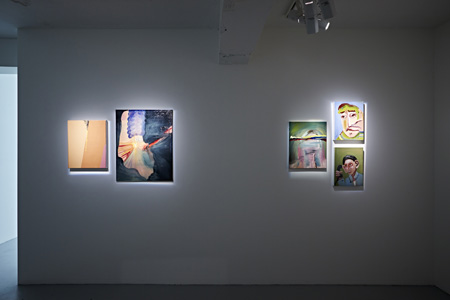 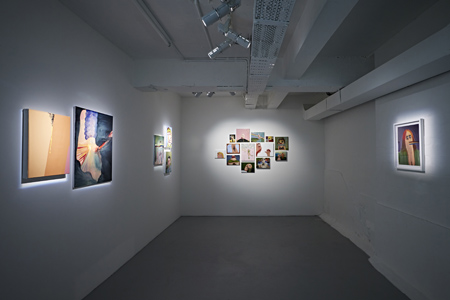