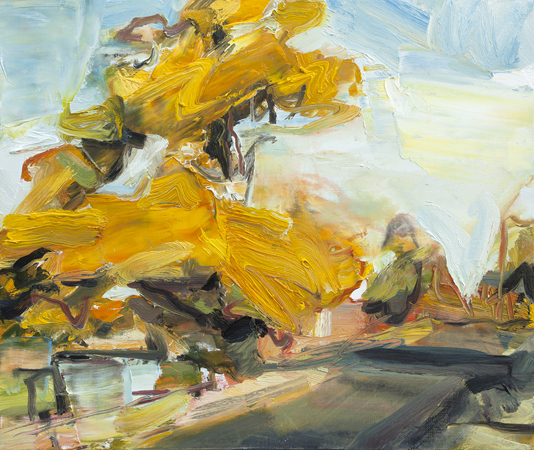 The status of the artist as some heroic outsider stuck in a garret has definitely changed. The idea of Oscar Wilde roaming around dinner parties waiting for his moment to strike seems a little quaint to us. The Bohemia of Moulin Rouge (or La Boheme whatever you prefer) full of debauchery, nude models and singers, the rich lecherous patrons and the romantic poet, is a lost Romantic dream in the age of lockout laws, gentrification and the artist as entrepreneur.

And in any case when Mr Otis invented the lift in 1893 the garret, for most buildings, the most unseemly and unwanted space, turned over night into the penthouse. Some buildings still don’t have lifts, 77 William Street is one of them, and after the long flight of stairs, on the top floor you find Chalk Horse Gallery and behind that the studio of Robert Malherbe.

77 William Street, in 2001, was my first real studio. I cannot remember very clearly but it seems to me that Malherbe joined the building at much the same time. When we left the building, and after a decade elsewhere, and due to the vagaries of the Sydney property market, by some fluke, we found our way back to this building as a studio and gallery. Malherbe was still here, and was very welcoming.

So although things may have changed there is no doubt that artists still support each other, and recognise each other as friends and fellow travellers, as an artistic community. This exhibition is made by the smallest transposition of space by the moving of paintings through one door, and I think the show embodies this proximity to the studio and to making.

Malherbe maintains a practice that is grounded in observational drawing. In a digital age, Malherbe insists on the long look, the subjective response to things, in front of him. His work embodies a relationship to things not through the screen but in real time and space. He is the guardian of a tradition of art making that is perhaps more relevant today than it has ever been. In contemporary art there is a refound interest in the phenomenologists who realised we were embodied subjects in the world, beings in the world, that responded to things not only through reason and through some crystalline vision, but also through our other senses and as a body in space. The time and place of Malherbe’s work is always very clear in his probing canvases.

Contemporary art is also interested again in its histories. As a painter what Malherbe is mining, again for contemporary relevance, like a theatre director might reconsider an old play, is the traditional genres of painting: the still life, the landscape, the nude. These genres were much maligned through the second half of the 20th century but have returned with a vengeance. Malherbe continues this conversation with the longue duree of painting with insight and intelligence.

Malherbe’s work is on the one hand familiar and grounded in these histories. But in their deep singularity, to a particular time and place and through his vision these works speak of a faith in humanist insight and activity. They are works that are kind and empathetic, that ask rather than tell. It is a way of life that Malherbe has devoted himself to and the site of this devotion is a top floor studio right next to Chalk Horse Gallery. This exhibition is more about an ongoing sense of time rather than a stop.