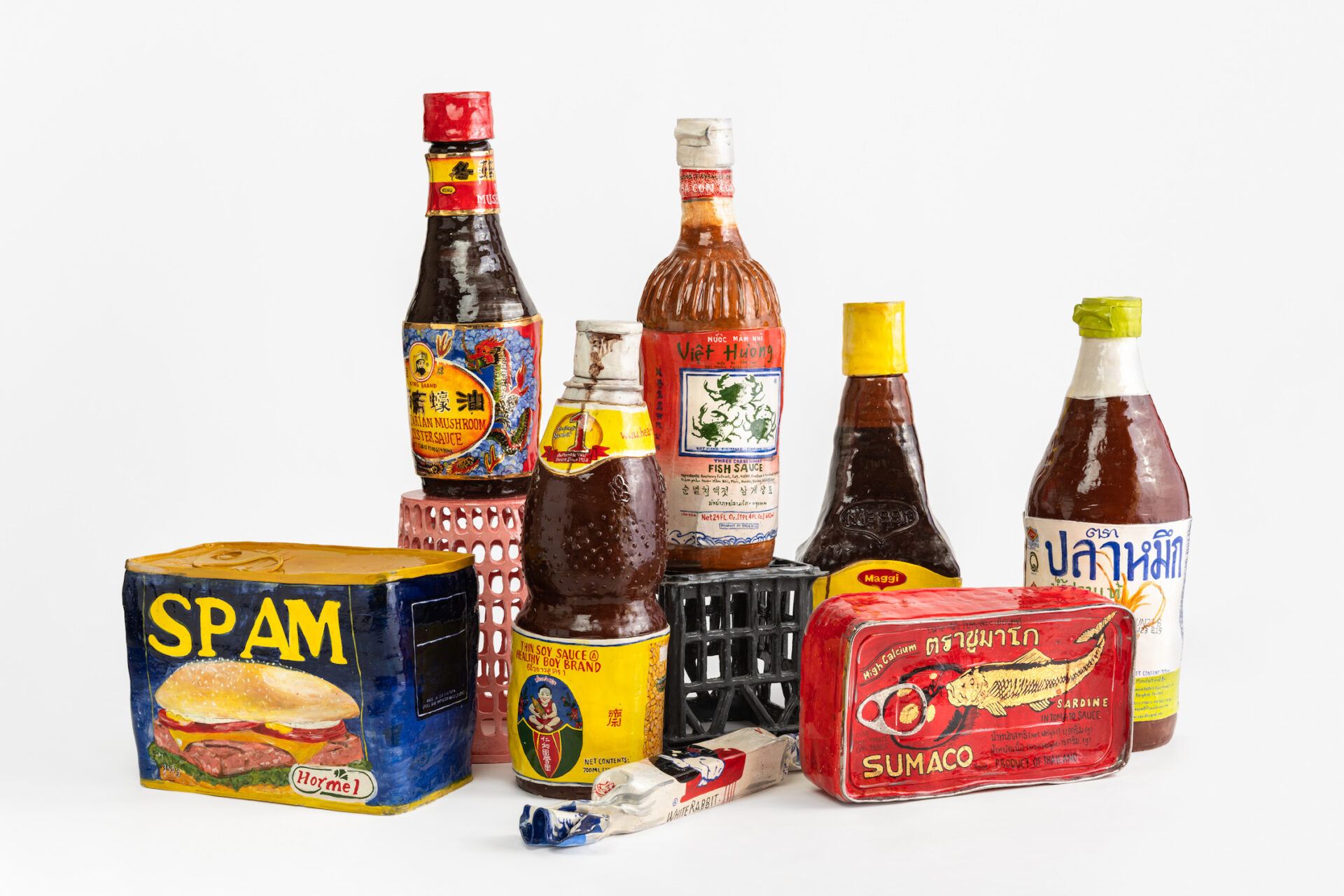 Maggi is not Soy Pot

If you know, you know

If you know, you know

Mechelle Bounpraseuth’s practice marries many of the exciting possibilities of artmaking. It combines a deep commitment to materiality and the unique properties of the chosen medium (clay), with a distinct visual language that is coded in the artist’s own lived experience and narrative. The works deal with issues and topics that have broad, universal appeal: that of family and of care, but with a specificity that IYKYK (if you know, you know). That is, there are multiple layers of meaning that can be read in the works, and as such an audience’s encounter with Mechelle’s works is not prescriptive. Anyone can make a sculptural piece that resembles food out of clay, but Mechelle’s practice is not just an expression of pop-art sensibilities in a contemporary context – it is a deeply contemplative practice that con- siders the legacies of family, our ties to diaspora culture, and what it means to celebrate yourself and your heritage.

This exhibition is significant not only as Mechelle’s first solo exhibition with Chalk Horse Gallery, but also because it marks a decidedly new direction for the artist who is aspiring to new heights, both metaphorically and literally. Where- as her previous clay works operated in a scale that was closer to ‘life-size’, the new series of work is upscaled to play with scale and space in a way that the artist has not done before. For Mechelle, the works are born from a need to loudly declare herself and her creative practice in this world: a place where too often power and space is given to the most privileged amongst us: white, rich, male (or all of the above). To occupy public space as a woman, especially as a woman of colour, is a fraught position that oscillates between invisibility and hypervisibility, where one’s presence is a mere token. Our relationship with space and access is not one where more of it is necessarily a good thing. In this way, the idea of physically taking up more space by making works that are larger than before is a deliberate and affirmative act that expresses the invisible power dynamics that inform our day-to-day experiences and how we relate to each other. Their status is further conferred through the use of the ceramic milk crate as a pedestal, literally elevating each work to stand proudly in the gallery space.

Wielding clay at this scale is more physically challenging, but it also changes the relationship between the artist and the artwork to create an almost interpersonal bond. For Mechelle, the act of scaling up affords her to encounter each work “almost like a person”, as distinct embodied forms shaped through her hands and physical touch. I am reminded of the Greek myth of Pygmalion, a sculptor who after crafting a perfect woman out of marble, falls in love with her. While Pygmalion is perhaps a comment on masculine aspirations to find and control the ‘perfect woman’ as much as an allegory on the act of artistic creation, Mechelle’s work is wholly different as the love she expresses is not for her sculptures themselves, but rather for who her sculptures are for.

Love exists in Mechelle’s work in the same way that as Asian children, we are given fruit by our parents instead of being told ‘I love you.’ It is love that is expressed in a way that is humble, quotidian, everyday, but not insignificant. For Mechelle, the subjects and objects of her work are the same: it is a way to pay homage to her parents, to rec- ognise the value and significance in the spaces and objects that provided her comfort, solace, and sustenance as a child growing up in a white Australia. They are a way of validating the experiences of other migrant children, whose connection to culture is often mediated through food, consumer products, and experiences in the “International” aisle of the supermarket. These are not just your typical grocery items, these are things that become our familiars. When I said earlier that IYKYK, this is what I mean.