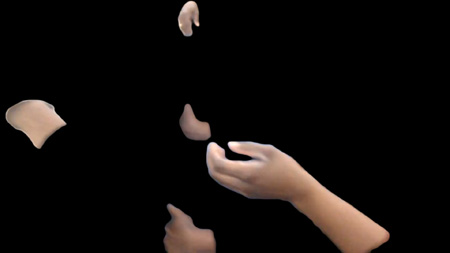 Moments Of Must Have

James Oram isolates images of the everyday and the banal, elevating the mundane.

The exhibition, Moments Of Must Have, continues along this line of inquiry by examining the mass consumption of material objects and the resulting construction of personal identity. By questioning the correlation between the personal identity and material consumption, Oram’s work offers a deeper critique of advertising itself. Moments Of Must Have presents advertising technique in a way that strips away its elements, revealing what (if anything) remains once all artifice has been removed.

In Reduced I, II, and III, Oram takes advertising to the point of abstraction in his treatment of found imagery. Mass-reproduced department store catalogues have undergone a process of reduction through the removal of any semblance of promotional text or visual signifiers of commodification. Oram eliminates anything except for what we can actually see of the advertised product. The resulting image has been enlarged, digitally printed and reproduced. The advertisement becomes abstract, minimal, and loses all intended semiotic power. In the absence of text as anchorage, we begin to question, what is being advertised? Is it a product, or a look? In its abstraction the advertisement has transformed from printed page to painted image, and in its digital reproduction, the image has become a new surface entirely.

The illusory promise of “uniqueness” is revealed as a fallacy when we are made aware of the reproducibility of the original image. Oram aims to reclaim the unique object through the gestural act of painting. In the enlarged image, the gesture of the artist’s hand is made apparent and the image takes on an almost painterly quality. We see the subtle strokes of the painter’s brush working in tandem against the enlarged print of a dot printer. The artifice of digital reproduction is reified, and the human gesture has been isolated—creating new possibilities for individuality.

This technique of reduction is carried further into Midnight Arrives and While Supplies Last. Found footage of the Black Friday Sales in the United States has been rotoscoped frame-by-frame to remove everything except customer hands, and fragments of the packages that they attempt to grab. Oram creates what he has described as “abstracted chaos”, and with the removal of sound, the isolated actions of grabbing are further dissociated from the pandemonium in the original footage. Recreated in this fashion, the Black Friday Sales become sublime, meditative, poetic even. The human gesture is emphasised by the plethora of grasping hands, and the ways in which they grab. Despite all reaching for the same ubiquitous item in the pursuit of individuality, idiosyncrasy is instead exhibited through the intention behind the gesture of the grab.

Wallpaper again challenges the utopian ideal presented within conventional advertising technique. Pages from Wallpaper Magazine are grabbed, chewed and expelled, with the resulting bolus being used to create a sculptural piece. The pages exhibit what we assume is contemporary furniture but their temporal placement is ambiguous. Modernist design is presented in a contemporary setting, the styles recycled and reused. We are unsure of whether the furniture advertised is contemporary, or from a previous time. For a few brief seconds we are lulled into the modernist utopia before it is quite literally snatched away from us, chewed up and regurgitated. Rather than subscribing to the offer of uniqueness that the ad presents, the artist instead chooses to impart his own individuality on the object through bodily creation and personal regurgitation. The utopian promise outlined by advertising has been declassed and debased, and the artist has reclaimed a personal identity through his mediation of otherwise mass-produced objects.