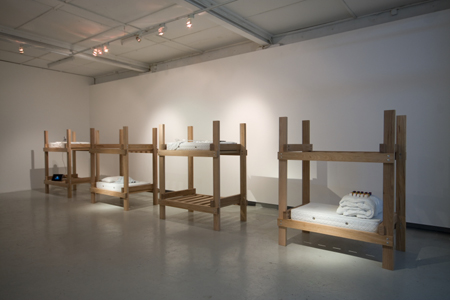 This exhibition is Alexander Seton’s second show at Chalk Horse, and the subject of this show is internet memes. An internet meme is one of those annoying web phenomena which seem to have a life of their own. Famous examples are the ‘Star Wars Ki’ and the ‘Dancing Baby’, both of whom we all love to hate. The title of this show relates to a term coined by Keith Henson: a ‘memeoid’, is a person ‘whose behaviour is so strongly influenced by a meme that their own survival becomes inconsequential in their own minds.’ Examples of these people are rare and only kamikazes and extremist suicide bombers totally fit the bill. Seton suggests that as an artist exploring these memes his obsession almost equates to the fundamentalism of a memeoid. The carved work explores the invasive nature of internet memes – the often fleeting entertainment and the sense of community they provide lies in their infectious nature that preys on societies desires and need for diversion. This work playfully entombs these net fads.

Memeoid is founded uneasily on a paradox. The internet meme, a particular symptom of digital media, is immaterial and fluid. To create marble monuments, to these immaterial spectres, is an exercise of insoluble problem making. Marble is perhaps the most famous of plastic materials for effigy making. The translucency of the marble creates the impression of the softness of skin. It is also used in abstract contemporary work like the heads of Brancusi or (closer to home) Kan Yasuda’s Touchstone, at Aurora Place. But even here the weight and quality of the stone seems to suggest something living and real in the abstract. Perhaps because of marble’s monumental quality, its weight and corporeality, in this show marble is shown to be unable to fully account for the digital age.

On one level the work is directly related to critiquing a meme based culture, one that is totally attuned to fads and new age belief systems, as a pathology of late capitalism. But Seton also allows for nuance: part and parcel of all these phenomena is that the replication process produces mutations. Seton’s work is itself one of many mutations and interventions. The longevity of many memes is based on their ability to spawn parodies and reworkings, a list of which would include: Star Wars Kid, but with Star Wars effects, or its Matrix version; The Dancing Baby appearing on Ally McBeal, or the drunken and Rasta versions; the use of memes in video clips such as Weezer’s ‘Pork and Beans’. Representations in film, television and other media still represent a broader existence for a meme which of course exists primarily in the mind’s eye of all viewers.

The non-digital, material manifestation of a digital meme asks many questions. Lying on mattresses, flat and in high relief, the works allude to the bedroom. The work YouTube, particularly shows the prevalence and ability of anyone to be involved in digital proliferation. An example not directly referenced but suggested here may be the ‘Numa Numa guy’, who is the second most successful viral video after Star Wars Kid (2001-2002). Are the beds actually for copulation, a cyber-sexual mating and reproduction, all under the careful gaze of the webcam?

They also seem to reference the marble effigies on top of sarcophagi. Donatello’s life size marble effigy of Antipope John XXIII in Florence is perhaps the most famous example although there are relatively recent examples, such as Lord Kitchener’s tomb in St Paul’s by Sir William Reid-Dick. The Dancing Baby (1996-1997) is the most obvious link to a reading of these works as funerary sculpture. But here is the ultimate insoluble difficulty – memes cannot die. Here Seton creates an alternative to the digital world where memes can be laid to rest with dignity and monumentalisation as if they in fact had bodies (and a soul).