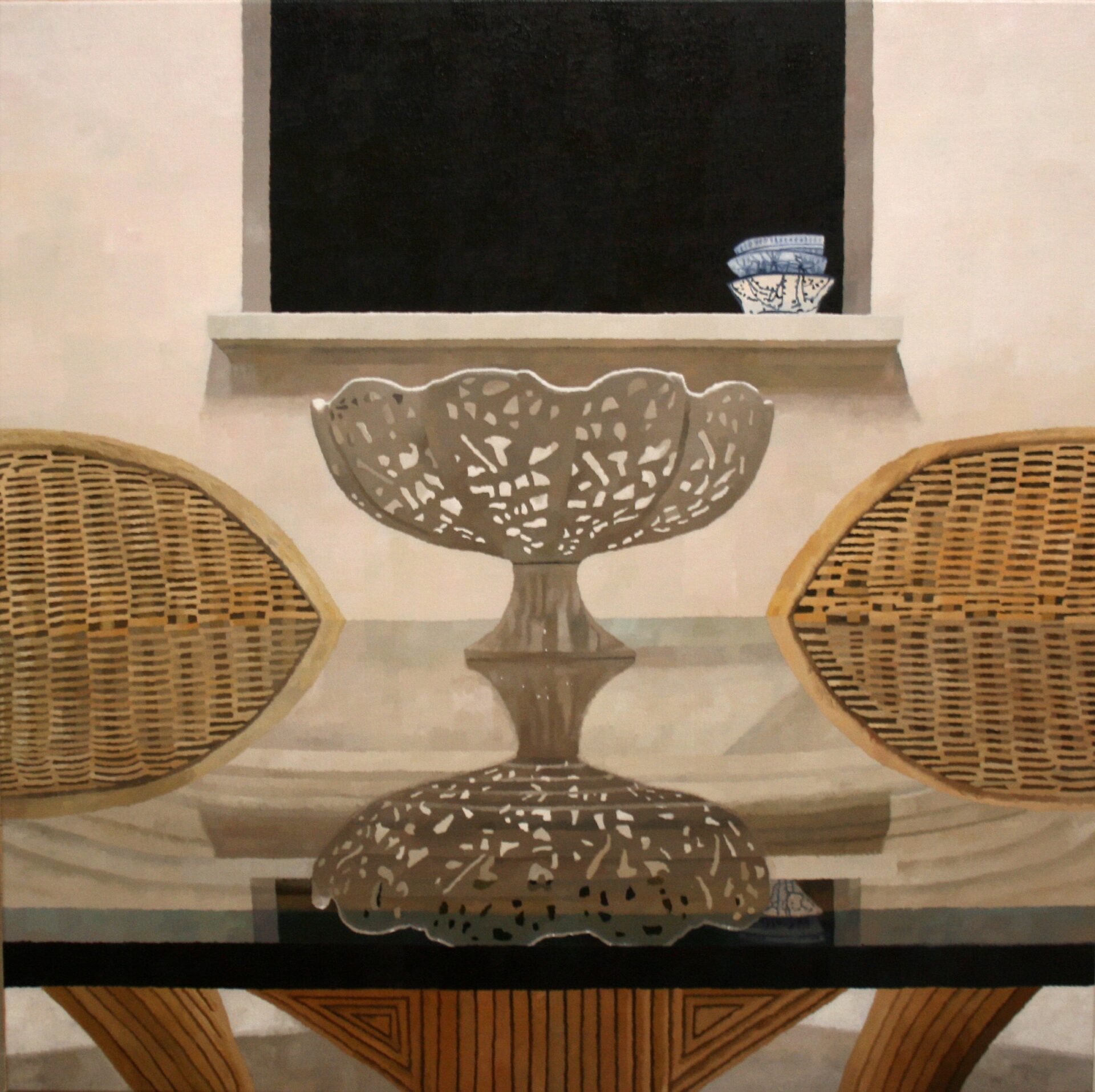 Immersed in the Stillness

Last Day of the Roses

Looking Into The Past

Time is often imperceptible, but in presence of Peta Minnici’s work, we feel it. Paintings imbued with a restful stillness sit beside black and white drawings charged with movement and vibration. The past is present, and the present unfolds and obscures before us.

In Marking Time, Minnici welcomes us into her painted world of vintage interiors. Here one encounters ornate mahogany furniture, crystal glassware, an old milkshake glass and milk bottle, porcelain bowls, cane chairs, and a radiator. There are many indicators of the past but no clear discernible signs of the day. Only one vague exception is offered in the work ‘Life Stilled’ where an object resembling a plastic bottle hinted at by the small blue disk on top is found – this however is ambiguous.

Minnici’s rooms possess a dense fervour, though an absence is perceivable. The dustless reflections of the tabletops, polished timber floors, arrangements of blooming flowers, and scattered books on the side table give the impression that someone was just there. Other times the spaces appear as though they’ve been deserted for decades and preserved somehow. They inspire a pensive engagement and Minnici’s own curiosity is from where many of the images emerge. Some interiors she gleaned by peering through a window from the outside. The brushwork itself is gentle and contemplative in its touch. The paintings have a tenderness, an amber glow warms them. Light inhabits space where people do not and floods the empty vessels in the still life arrangements, brightening the cool blue hues of the thick glass. The outlines and shadows of the forms are softened and we are inclined to consider them with attentiveness, with the same repose they reflect.

When considering the ink drawings at first glance, I imagine a hand run above the paper, distorting and pulling the image, like a magic spell or wind tugging on the branches of a tree. Like a photograph taken with subjects in motion, Minnici’s drawings make us aware of location in relation to someone existing in, and moving through it. I am reminded of Japanese photographer Ishiuchi Miyako whose pictures unite past and present, documenting psychological and material traces of the passage of time. We see this in Miyako’s portraits of her mother’s used lipstick standing against a faded background, or in her depiction of the shadow of a figure on an empty street at night. While stylistically different to Miyako’s aesthetic, a similar melancholic intimacy and spectral beauty pervades Minnici’s work. Though unlike the immediacy of capturing an image through photography, Minnici’s meticulous ink dotting is a process tied up with the actual observation of time itself. Each dot may represent a second, half a second, or longer; each impression is a marker of time, marking time. Some dots make slight contact and only skim the page; others are pressed firmer, locked onto the surface. Certain seconds seem weightier, fuller, more entrenched; others are barely perceived. In each work, the dotted lines take on a specific rhythmic formula. Lines move in a vertical direction in ‘Looking into the Past’ and ‘Looking into the Past’; in ‘Solitary Confinement’ they run horizontal, propelling our eye across the paper; in ‘Quarantined’ they travel from the outer corners inwards, creating a vortex, pulling us into their world. They resemble black and white photographs being exposed in the darkroom. ‘Last Day of the Roses’ appears as though it has been faintly shocked by light, an image frozen in time while materialising. The drawings have an expanding presence, like they are opening up.

Where there is light, there’s shadow, and in Minnici’s work, shadow clashes with light to elucidate but also mystify. In ‘Looking into the Past’ a face is woven into the landscape, obfuscating foreground and background. I wonder whether the figure is hovering above or coming through from behind. Is it the imprint of a memory, an imagining, a dream, an echo of a person who was there? Curiosity takes over… and a thought arises… had Minnici been looking through a window when the image was first captured, never stepping into the actual space but present as a shadow? Shadow embeds psychology into place. I think of the black and white films by Swedish director Ingmar Bergman and how Minnici’s drawings bear semblance to them. Light bursts through the windows of vacant rooms and leaves quiver against an old brick building as they do in Bergman’s 1961 film Through a Glass Darkly. In this film the rooms also hold an emotional charge; they breathe. Lonesome landscapes, the recurrent hospital bed in the series, and the shadowy impression of a face in ‘Looking into the Past’ contain the existential beauty and despair portrayed in Bergman’s cinematic masterpiece Persona (1966).

Minnici’s works linger. I sit with them, gazing into the centre of each. At first, they take me away from home, away to another place, another time. But after a little while, they draw my attention inwards, and bring me further back. Back to a centre, a personal one, and so I sit with them for a while longer and rest in this solitary moment.