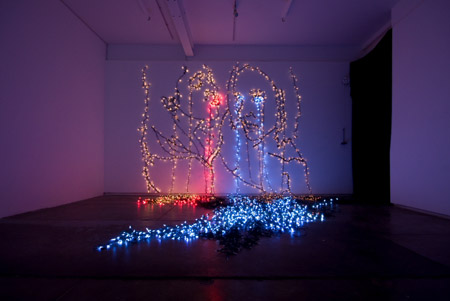 Laura Adel Johnson
‘Profile’
11 – 27 June 2009
Every December, many western cities have a particular street or suburb where there is a higher intensity of Christmas decorations. Like Deleuze and Guattari’s reterretorialisations the lights appear and then disappear, only to reappear again. Some of the displays are computer controlled light displays set to music, some involve robotic Santa Claus and others comment on the social questions of the day. Each house, in competition with the other, seems to be involved in a contemporary potlatch where all the time, money, and energy of the house gets poured into the incredible annual display. All this in order to keep up with the Joneses; look on You Tube and you will find all sorts of wonderful examples.

In the earlier part of 2008 Laura Johnson was working and living in Omaha, Nebraska, USA where she was involved in a three-month residency program at the Bemis Centre for Contemporary Arts. Omaha is a classic Midwestern mecca, for among other things, fairylights. It was in response to this setting that Johnson begun ‘drawing’ in fairylights. From their kitsch beginnings Johnson’s work is now complex formally, with multiple strings and colours and flashing rhythms, and whose content is high-minded. What Johnson has successfully animated are commonplace things, fairylights and sticky tape, and she has, like the Arte Povera or Neo-Dada, found art in impoverished material.

The best way in which to think of Johnson’s work is through Susan Sontag’s ‘Notes on Camp,’ and not really through notions of beauty but of a certain ‘aestheticisation’ of the everyday. Johnson looks at the world of crass commercialization – its flashing fairylights at Christmas, its celebutantes and bright colours – with ‘tender feeling’ and not merely cold irony and detachment. Sontag writes, ‘The connoisseur of Camp has found more ingenious pleasures [than the Dandy]. Not in Latin poetry and rare wines and velvet jackets, but in the coarsest, commonest pleasures, in the arts of the masses. Mere use does not defile the objects of his pleasure, since he learns to possess them in a rare way. Camp — Dandyism in the age of mass culture…(note 46).’ Even the way Johnson sources/shops for different brands of fairylights that may have a particular blue, or a warmer white bulb, is an extension of Camp and its basis in mass products; hers is an art of the Westfield.

Johnson’s subject matter also comes from another symptom of late capitalism, Facebook et al.. In our society traditional strictures on our identity no longer act on us so effectively, things like Church, State and Family. Instead we are all able to create ourselves however we wish, endlessly. At nightclubs now clientele act out certain poses like dancing on the table, lesbian kisses etc, all so they can be uploaded, before sunset, to a Facebook page. Stolen profile pic (meeting people is easy) is a glowing tribute to our desire of self creation and love, using a found profile picture. The popularity of such social networking sites reflects the narcissism of a generation that is increasingly image-obsessed and egocentric. However, the earnestness with which Johnson draws on lights of blue tears paradoxically suggests that these characteristics are strangely appealing and highly serious. Like Paris Hilton’s sex tape scandal, it’s so bad, it’s good.