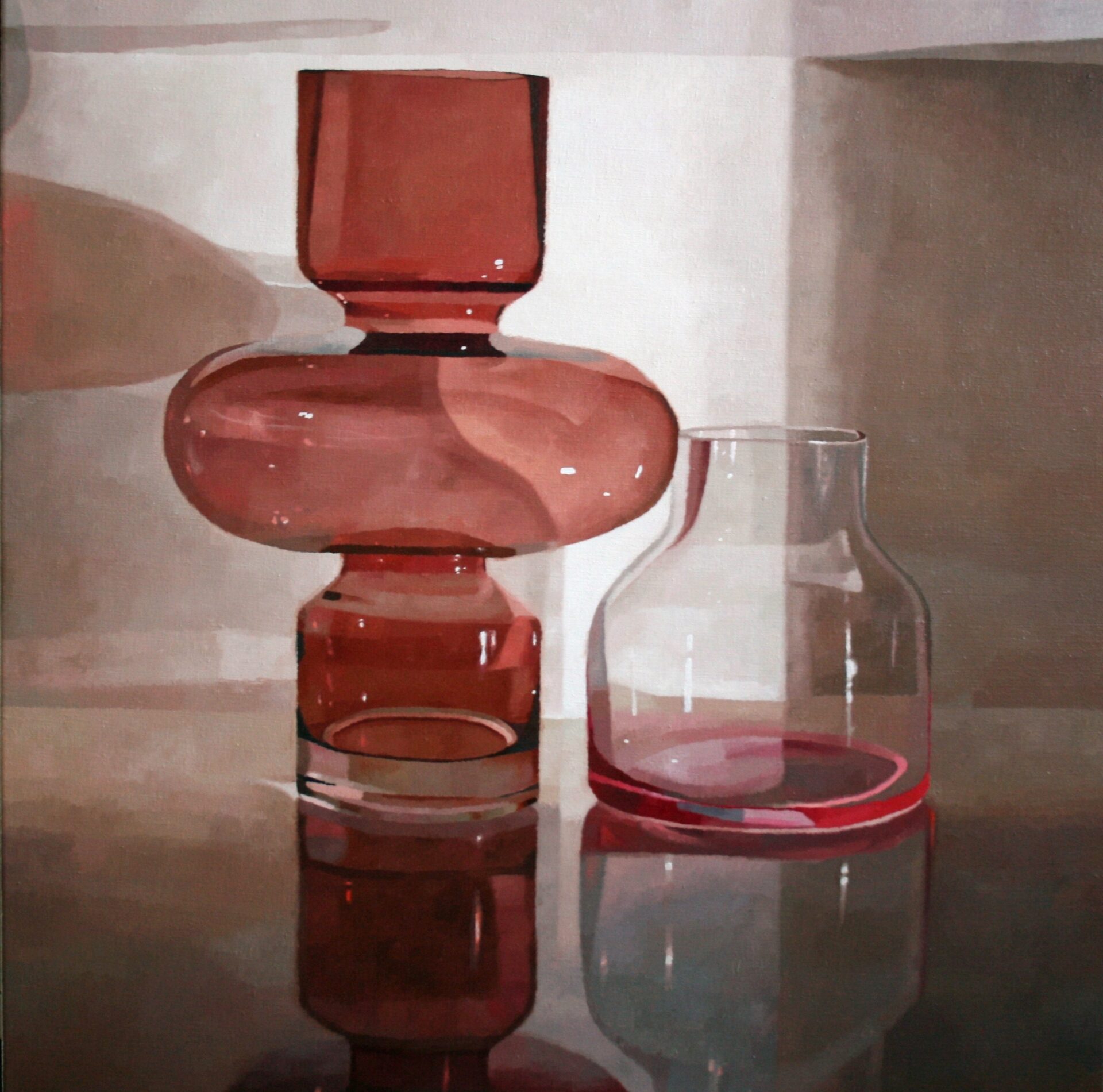 In Kaleidoscope, the precision that is so often evoked by geometry is dissolved in a collision between object and surface. Throughout Peta Minnici’s paintings, in the split between shapes, segmented into shadow, each point and line are an intersection, a refraction in relationality. ‘Glass Connection’ inscribes the site of a convergence, where the slim curve of an object morphs into the mirrored length of its pursuer. Each line is a slippage, the coming into company with another, a meeting coated in a pearly iridescence, cornered into the curves of glassware, plunging into sunken shadows. In tracing each curvature, our attempt to dislocate each object into a singularity is interceded by the impressions each outline imparts upon its company. There is no surface without submergence. Any pretext of solidity is distorted by an underwater surge, clouded by the shadows that soak through their designated objects into watery light, wavering and rippling surface into space through their projection.

In ‘Murano’, the doubling of materiality into immateriality, of object into shadow, marks a relentless embodiment of emergence or re-emergence. In looking, I envision my finger gliding around the darkened rim of each glass, cold and smooth in its circularity. The reflections conjured upon the pale sheen of wall are unsettled by my intrusive movement. In Tender Buttons, Gertrude Stein personifies ‘A CARAFE, THAT IS A BLIND GLASS’ as

‘A kind in glass and a cousin, a spectacle and nothing strange a single hurt color and an arrangement in a system to pointing. All this and not ordinary, not unordered in not resembling. The difference is spreading.’ 1 This portrayal that Stein writes into an uneasy being, glass as a fusion of translucence with substance, speaks to the

function of the kaleidoscope itself, acting as a testimony to what Minnici’s paintings envision – the repeating of reflection, the collision that erupts as object merges with optic. Each thin coating of paint invokes a shadowy familiar figure crafted from the glass that stands unfazed at the wound inflicted – an interruption of static symmetry, each shadow spreads and seeps, its indecisive shape as slippery as memory.

Upon encountering the inflamed warmth that stains a glass chalice in ‘Cranberry and Carafe’, its chasm bleeding red, I’m reminded of ‘the last words of Sarah Good, who was murdered in the Salem witch trials’, quoted in Ellena Savage’s essay collection Blueberries.

‘If you take away my life, I’ll give you blood to drink’. 2
There is no stillness to this still life. In the glass vessel Minnici crafts, the red that stains its interior congeals. We witness vivid colour deepen in consuming and being consumed by the space that surrounds and inflates it. Like the liquid that embodies Good’s assertive caution, the life-giving red circulates. Molten, it oozes into a seemingly contained space, stretching as it swallows the contours of linen, soaked in the heady mixture of the shadows it imparts.

To characterise Minnici’s elusive practice demands us to envisage a formation of memory. When I look at ‘Sunday Bubbles’, I hear a deepening resonance, the reverberating thrum that thumps through Mitski’s music video for Washing Machine Heart.3 As the camera pushes inwards in the video, sunken in the heavy trance of black and white, Mitksi emerges from the shadows, her arm resting on a pedestal. As her hand sweeps up her body, her arm juts out pointedly, framed by shadows enforced by the slim neck of a vase beside her. As the camera inches closer, the vase is made absent, only its shadow remains. Like the lines of Mitski’s figure, that lend a corporeal flesh to these dislodged contours, the spectral silhouettes that linger throughout Minnici’s paintings, memorialise the objects that craft them into being, their memory made material. The undulating curves of glass crowded together in ‘Sunday Bubbles’ are corporealized, thickened by the interplay between light and shadow. Translucent, but never vacant, the glass distorts the polished surface of the setting, mirroring their materiality into a memory exuded by the movement of space. Kaleidoscope sculpts shape into an invocation – a haunting that makes material how objects and the space they inhabit realise one another. Reflection is revealed as a recollection that never stills, a kaleidoscopic mirroring that envisions each body existing within, and throughout the fragments inflicted by the other.