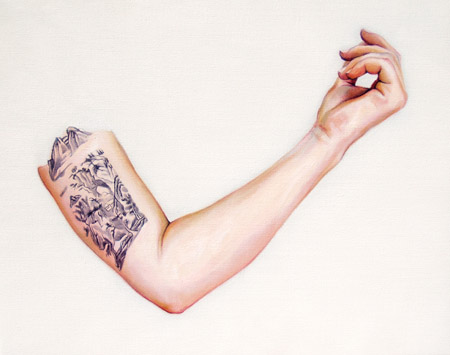 Julian Meagher’s Tattoo Series continues Meagher’s exploration of the body through painting. What is at stake in these works is the surface of the skin as the mediator between the inside and the outside, the abject and the symbolic, the face onto the world and the bones beneath. This theme was already looked at by Meagher in his early work of the medicalised body.

The word ‘tattoo’ comes originally from the Samoan for ‘open wound’; similarly the Japanese term for tattoo means insertion of ink. Both terms suggest the probing of the bodies surface, on the threshold. There is an ambiguity in the tattoo over whether it is part of the body or an extra supplement to that person. The permanence and graphic qualities of the tattoo have of course made it a symbol of community, love and religion through the ages; the way the tattoo scars the body, forever, is what gives it its powerful aura. The tattoo becomes part of the person who wears it.

In terms of painting then, the tattoo is a perfect metaphor; painting too is about mediating between the surface and the body. Is painting merely a surface and mask or does it somehow represent the body and soul of the sitter? In tattooing there is a reversal too where the body becomes the canvas for another representation, so there is a doubling of meaning between the person and the image.

Skull on Toru of Guitar Wolf