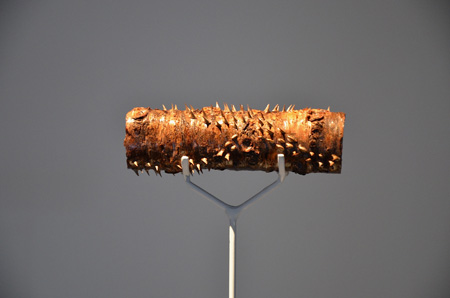 I Reach For Her Hand

James Kerr’s exhibition, ‘I Reach For Her Hand,’ embodies a complex and contemporary dynamic, between sculpture and collage. Kerr’s works directly reference a notion of contemporary beauty whilst also catering to the trans- historical symbolic powers of nature. The works symbolize an abstracted form of Darwin’s Natural Selection but in a contemporary world also embody current experimental variations within ‘nature’. As such, an interesting binary between the living and the preserved dead is played out in such a way as to confuse the Real and the fantastical. It becomes important to note that these works possess an element of hybridity in their splicing, and as such, an ambiguity to their literal and symbolic origins. As outlined in bataille’s The Language of Flowers, these objects only really come to exist through the power of culture and the way we imbue them with value: the ideal manifestation of love, hate, and other emotions. They become the relics of diverse psychological states.
In the same way that these objects align themselves with psychological tropes, they also relate to ‘archived’ courtship rituals and in a way preserve varying stages of relationships. beginning with the paper works, ‘Compatible Opposites’ despite its obvious fragility and brittleness, is hopeful and represents an emotional success with the rose petals and aged paper tessellating in an intricate and optimistic dance; it comes to embody this delicacy in both a unity and difference. In this instance the preserved petals encounter the patined paper and their combination results in a climactic love letter. The paper works come to moreover comment on a unity rather than difference. They become lovers because of their very differences. Similar processes are seen within ‘At The Foot Of The Mountain’ where it is implied that we become part of the work itself, taking on the role of the lover posited in front of the allegory of the mighty mountain. Finally, we are presented with ‘Medallion,’ the talisman of a proven love. This work draws on similarities to the rational complexities of the mosaic whilst also equating itself with the irrational bed of coitus, heavily decorated with rose petals. The flower as a symbol and material reality is explored in its trans-historical complexity: it is persistently a gift of love and an icon of beauty. Kerr treats the flower both as image and material, he ‘paints’ in floral matter.
The works also manifest uncertainty and anxiety, an anxiety one sees in love and the arbitrariness of nature and seen even in the venerated branches of science. Darwin comes to tell us ‘that as new species in the course of time are formed through natural selection, others will becomes rarer and rarer, and finally extinct.’ Equated to the scientific tradition, the sculptures almost become an indexical archive providing specimens used to track the process of natural development and sustainability from the moment of human manipulation. ‘A Map And A Key To Your Door’ balances precariously between failure and existence, the strange and the familiar, the sculptural and the found. ‘Nice To Know You’ becomes the embodiment of complete extinction and the reliquary. The crushed tree sap becomes the dust of old and forgotten memories. In essence, it is a form that has evolved, and in its evolution, has been unable to maintain itself, collapsing and imploding. ‘Untitled’ (Mountain Girl) comes to represent the seed of an unknown future, the prospects of what could be. It hopes for a future blossoming, but it is haunted by the surrounding works, which remind us of possible failure. Although a notion of contemporary beauty arises out of the tension between death and life, the works are also severed from any form of natural reproduction due to their artifice. They become specimens without a genealogy. In this way, these works come to acknowledge that one day their utter extinction is inevitable. They become the delicate and the rare.
Kerr’s works possess an element of fragility and they precariously oscillate between that which could possibly survive a process of natural selection and those specimens that have permanently fallen from life (here memorialized in a death-mask of bronze). Kerr’s works also become the index of the evolution of a relationship. Although equated to a form of naturalism, it becomes important to recognize that these works are cast, pressed and manipulated, they are within culture and the realm of the fantastical. As bataille relates ‘the flower’ must ‘conform to what must be, in other words they represent, as flowers, the human ideal.’ The flower becomes the object of emotional signification.
Craig Lee-Winser
1. Darwin, Charles (1859) On the Origin of Species: by Means of Natural Selection or The Preservation of Favoured Races in the Struggle for Life. 2. (Edited by) Stockl, Allan (1985) George bataille: Visions of Excess: Selected Writings 1927-1939: The Language of Flowers. 3. Darwin, Charles (1859) On the Origin of Species: by Means of Natural Selection or The Preservation of Favoured Races in the Struggle for Life. p. 1O5 4. (Edited by) Stockl, Allan (1985) George bataille: Visions of Excess: Selected Writings 1927-1939: The Language of Flowers p.12

A Map And A Key To Your Door

I Reach For Her Hand

Nice To Know You