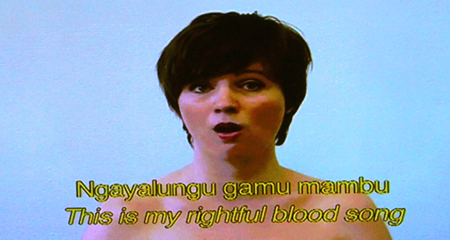 “My work deals primarily with issues of representation, history and identity. I work within the context of my own identity as an Aboriginal person of Australia to reveal broader issues about the human condition.”
– Christian Thompson
Black on White Catalogue, CCP, 2003

Christian Bumbarra Thompson is a Bidjara man of the Kunja Nation from Central West Queensland and also has European heritage. Through a practice that is informed by his absorption of a range of cultures as a young Aboriginal artist growing up in an urban environment in the 1980s and 1990s, Thompson’s art is expressive of a continuing relationship to his people, country and culture. Using subtle and sometimes more explicit references to the land and heritage of his community, Thompson’s work is primarily focused on the performative exploration of multiple identities; he inhabits a range of personas that he achieves through simple costume and carefully orchestrated poses and backdrops. In works such as Gamu Mambu (Blood Song), Thompson creates a superimposition of cultures, presenting a Dutch Baroque opera singer performing in the Bidjara language. The subtitling in English allows a glimpse of the culture’s colloquialisms, while the sung Bidjara phrases – complex multi-syllabic words – let us sense the strangeness of these sounds in the mouth of the singer whose European technique prefers vowels to consonants.

In his most recent series of videos and stills, Heat, Thompson has again adopted the role of director over that of the actor to capture the affective experience of the desert climate in the Queensland outback. “I love the mysticism and the seductive cruelty of the desert, my home, and how it can be so illusive and alluring and potentially life threatening”, Christian Thompson, SMH, September 2010. This latest video work launches itself from a transit point between visual art and performance, creating a liminal space between the present/absent and bringing into question notions of fiction/non-fiction. The environment at large is alluded to, and posits itself within the peripheral zone, whilst the individual being affected by and travelling through these surroundings dominates the point of convergence. However, the environment is a simulation, and the individual has been employed as an actress and so although the artists’ connection with the land is an inherent truth, what we are presented with is a fictitious incarnation.
Thompson’s artistic practice successfully navigates and suggests the complexities of the post-colonial situation in Australia today. Thompson constantly plays on the boundary of binaries associated with these issues – black/white, exotic/mainstream, art/anthropology, primitive/futuristic – and never ceases to surprise with his multivalent images. The oppositions are played with and reversed and other alternative spaces are suggested. It is these alternative spaces, those that exist just outside of our central consciousness, that are universal to “the human condition” and are highlighted so poignantly through Thompson’s work.