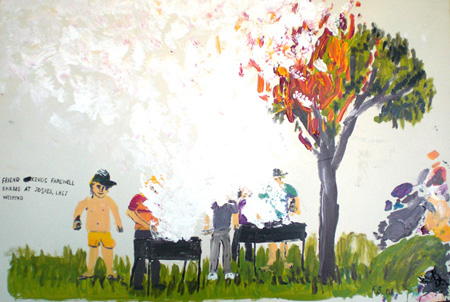 From the Garage / Only one way out of here.

Work From Garage is Fergus Binns’ second solo show in Sydney. First introduced to Sydney in the MCA’s 2006 Primavera exhibition Binns has garnered a strong following in both Melbourne and Sydney. His loose and sometimes naive style, like some latter day Nolan, belies the complexity at play in his work. Binns describes his own work: “It is important to learn or be aware of facts, myths and animals sometimes. For me, they can be the seed of an idea, be translated, wooed away from their natural habitat, into a context which may provide a different reading or understanding. They can act like the punchline of a serious joke.”

Binns’ work is fun but at the same time critical. He moves effortlessly through a wide range of subjects, often centred on Australia, and more importantly between different visual registers from cartoons, logos, realistic painting and a sort of bush amateurism.

In Work From Garage, Binns presents a number of iconic scenes and tableaux from everyday Australian life, as seen through the lens of TV and current affairs. From Jetstar passengers in a typical queue to a shark attack, two kids starting a bushfire, and a six-stitcher – it is as if we are looking at the imagery of an Australian summer. But some of them show a darkness – a car veers off a road, an young boy holds a tray of meat. These works both pay homage to and undermine the image of Australia.

Binns’ naïve style is integral to the themes he suggests. His simple and direct style reinforces the satire and the conflation of multiple meanings and sign systems. The naivety of the painting may be its own sign, with Binns’ approach to rendering his scenes allowing for a fluidity between realism and the iconic, between the symbolic and the Abject (see Shark Bite, 2008). In addition to this, his looseness and boldness sustain virtuosic passages of mark making and colouration. Through this integration of iconography and style, Binns explores the cultural landscape of Australia, particularly how it is re-made as a visual culture.

“When I was young Paul Saric told me that one of the local older kids rode his KX80 from West Sunshine to Uplands skate park (city).”
– Lane Cormick