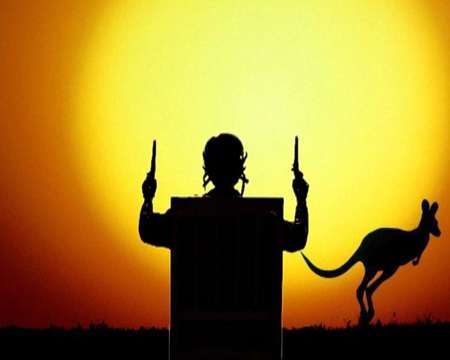 Let’s start here. We make things visible because we like to see them in front of us. We hide things because we do not want them in front of us. It is also possible to do both. We are able to hide something in the visible, so that the hidden message or topic is not confronted directly (which could cause us to flee from it), but is considered through something pleasurable. Jedda-Daisy could be doing such a thing here, and yet she could easily not be doing it. Either way there is an important starting point. This work seems to be created out of Jedda-Daisy’s own kind pleasure principle, and in turn lends itself to be pulled and interpreted in many ways – it is personal, detached, funny, pretty, provocative, fastidious, clumsy – it can question or it can answer, but only if you want it to. Whatever your interpretation, the artist seems to knit her own little world, not disengaged from the larger one, but far enough for you to visit and almost forget what the bigger world might look like.

This world of Jedda-Daisy’s is filled with nomadic half-men that roll jubilantly from land to land without any sense of satisfaction or intelligence, of still life’s from her bedroom that seem to only become interesting by the fact that these objects have been noticed and painted, of anatomical drawings where almost-sexualised characters appear as a jumble of limbs, or of pretty patterns of half-knitted masculinity in the form of little woolen legs with little pink penises. It is these knitted pygmy legs that cling together on bed sheets, desperately attempting to salvage some kind of lost or fragile libido. But there is nothing to salvage. The little penis legs are funny, and of course humor always undoes the loaded symbol. By presenting the penis as a little knitted pink joke, the artist could be playing with a stereotypically female craft (knitting) or psychoanalytical themes such as castration anxiety or penis envy, yet it all seems too neat and tidy for Jedda-Daisy, who avoids the over-performed formulas. What Jedda-Daisy may be doing is showing that returning the male gaze – that historical look which objectifies the female – does not have to dwell in serious angst or overtly declared female statements (about the man and his all powerful dick), but can be done through laughter and subtle reversals of representation. The penis is here more as an intentional afterthought – a tiny knitted toy – and looks so helpless that it is not power that it evokes but pity.

Humour is an important element for Jedda-Daisy, and the relationship here between the comedic and the aesthetic is a very persuasive one. What is a joke if not a means of communicating on many possible layers? Of presenting something under the cover of something else. Of course some jokes simply appear, as they are, seemingly funny without social baggage or meaning. The work here ambiguously sits in this space between what is visible and what might be visibly-hidden. The world is funny, its also serious, but it is the same world. Jedda-Daisy’s knitted, filmed, painted, and drawn world is explicitly obscure, opaque, obvious, and self-satisfying. For this reason Jedda-Daisy’s work can be enjoyed however you want to enjoy it – grandmothers, perverts, men and woman. Yet, and let’s end here: looking is never indifferent, it always comes with hidden things.