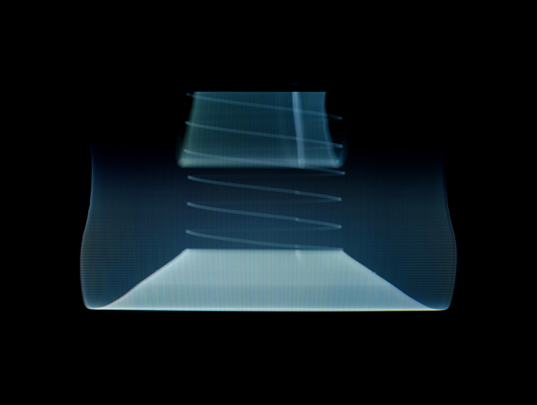 I grew up upon some dormant plains west, west and further west of this sprawling eastness. Trips to Sydney were rare and after six hours in the car the destination was only known when I smelt that smell. Coming off the Cahill Expressway and passing the matchsticks it was there that, window down, you could clearly inhale a City Rail train. It was a gust of warmth and bite, dirt and blackness and everything fresh, country air could never be.

Like a distinct scent Kenzee Patterson’s work pulls us down memory lane. We pass by small towns and small houses, peering in windows to see lump of lard televisions held up by obsolete television cabinets. Winding the corner and railroad tracks take all their strength to balance fat and heavy trains with no care for the clean, sleek silver of the Millennium.

We have a laugh and then look back but they are gone. Dust. Patterson presents us with ghosts, death masks of superseded technology. He asks us to focus as CR5A, DTV-5101, TX-21PS72AQ and CP28WF2 turn off for the very last time, each bidding farewell with a unique dying breath. The skulls of the City Rail fleet similarly present themselves as dead head shots like memento mori propped up for one last still capture.

And yet for all this talk of death and exits Patterson alternatively displays the heaviness of past technologies as light. Clean. Flat. We see what seem like ephemeral flat screen televisions as dark and smoky as the most sumptuous cinematic experience. And the white-framed trains sit in a painstakingly presented cube, as slick as iPod bright. The past is reconfigured as the future.

Although I feel we are observing a wave. A hello? Or a goodbye? A birth and death in the same instant.

I see the deep hollow sockets of those trains and I think of a cow I once knew. Her bovine cheek bones and soft, grey hair. She gave birth to her calf and then her body failed her. She sat down and would not stand back up again. For two weeks we fed her and brought her water, nudged her so she would remember her legs. But no. Eventually we knew she would never get back up again. We walked with Dad, an all too sad .22 procession. Warnings of don’t look only meant peak through splayed fingers and of course we did. That noise. And then a small dark hole that began to weep red.
A split second.
A single shot.
Meticulously executed.