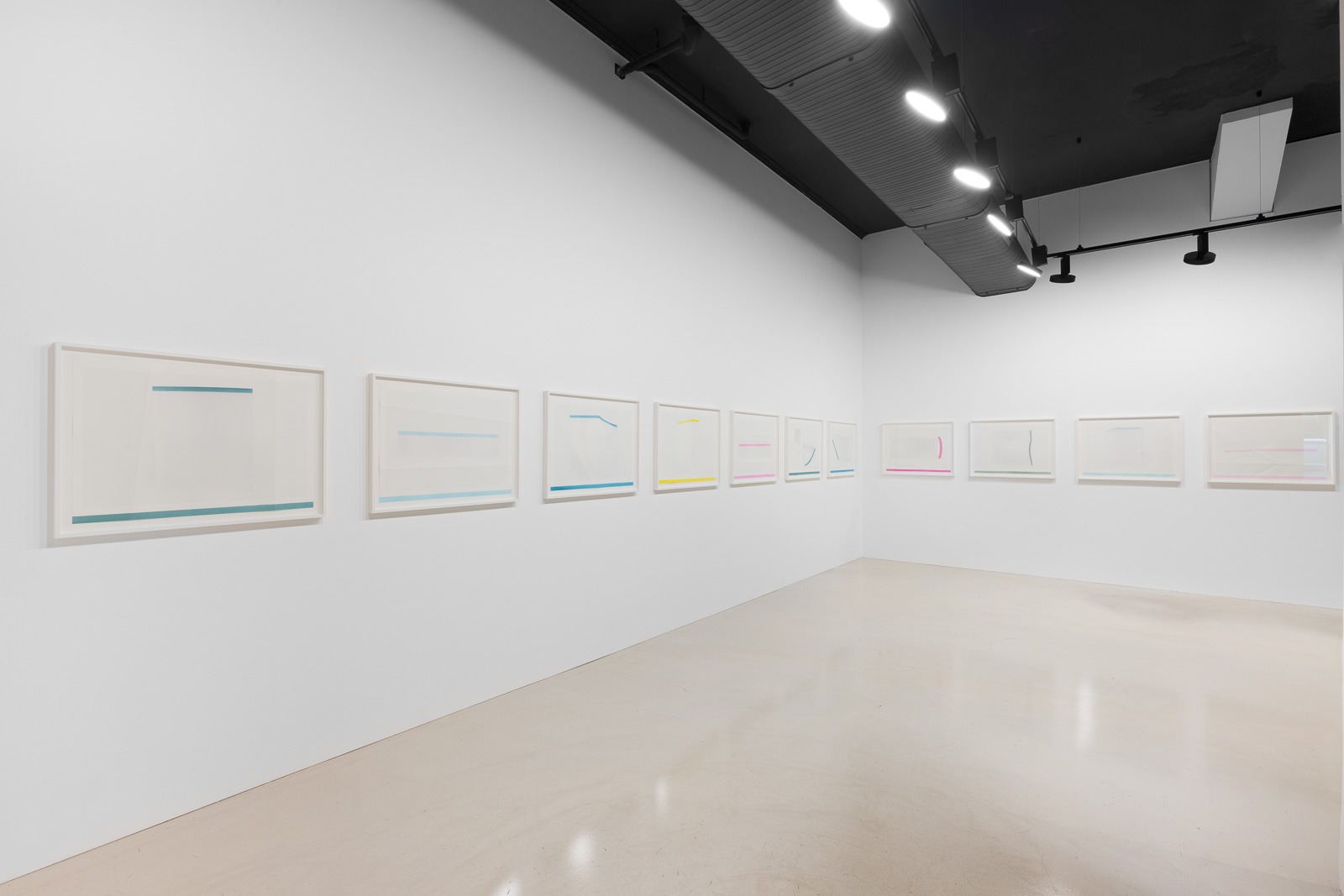 Matt McWilliams’ works have a ludic quality that never foreclose and answer. The work itself is playful and arresting and it plays in the way art does materially and visually. Putting the elliptical approach of McWilliams into words always threatens to kill the wit on which it is based.

When you first enter the space you are met first with a strong sense of seriality and repetition. The whiteness of the page, the paper ground, is an insistent beat. McWilliams recently saw a large retrospective of Cy Twombly sculptures and the connection to his own work was evident to him. The overall whiteness allows the subtleties of colour, of form and shape to speak across the works.

The repetition is due to a complex process that McWilliam’s follows consistently. First, a line is painted or drawn in ink on a page. The page is then folded into a sculptural form. The form is then photographed. This photograph is printed back onto the paper now unfolded back into a flat plane, although maintaining the creases of the original sculptural form. In the meantime, the photograph has been digitally manipulated to maintain certain colour values so that the reproduced colour matches as closely as possible to the real ink of the original mark.

It is this process repeated that creates these various and diverse outcomes. Like a musical fugue, the baseline is still strong throughout the show as the flights and fancies take hold of each singular work.

I can only begin to tease out the game that McWilliams starts and the way the works resonate. The work above all tries to answer the philosophical questions of art itself. It is self-reflective, which is almost a truism given the process sketched above. But it is self-reflective about definitions of drawing, painting, photography and the digital reproduction of images.

It brings the form of the paper in direct relationship with its manifestation as a surface and ground. It equivocates between what is the real of the ink, versus its reproduction. It contradicts itself by producing a work that is hand made and materially manipulated but also mechanically reproduced and digitally “manipulated” (a misnomer here because manipulated in the old sense suggested the manus, the hand).

Light itself, the primary ontological force of photography, is also a subject. Photography means drawing with light, and McWilliams uses light in various ways. First, the inked page must be folded and photographed under serious light arrays in studio conditions. Then the photograph is scanned and printed again with various forms of mechanic lights. Finally, in display the light of the sun or the gallery space changes the perception of the work depending on space and time.

There are no answers about these philosophical questions. Instead of talking about the manner of things (of painting, photography and drawing for example) nothing is fixed in this work and is a constant flux. Difference and shifting is the subject itself. As Deleuze highlighted, who was also interested in repetition and series as a manifestation of difference, you need a less fixed form of language, that allows for shifts in “intensities” or different states of a thing. Difference for Deleuze is not merely looking at differences but accounting for the change of intensity over a series in and of itself.

To bring it back to you and me, the viewer, McWilliams work brings forward the fact that we are all in a constant state of becoming. We are beings in the world that change and shift depending on where we are and who we are with. The beauty of this series is that it represents a philosophical idea: the shifting ground of things, the movement between states, that is the core to art, is also imperative to living as an ethical and responsive human being.