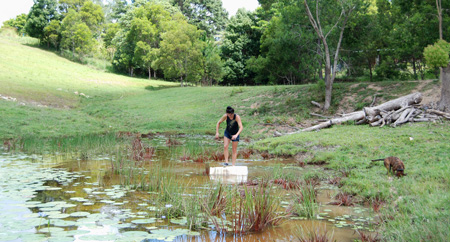 Kate Mitchell presents range of work in her 2009 Chalk Horse show, including performance-based videos, projections and objects, drawings and conceptual offerings; a human sundial, an endless smile, and markers of every day that she has lived. Mitchell’s work engages with the imaginative possibilities of performance beyond endurance, as well as with the ethics and aesthetics of work and its blurred boundaries with the orders of play and of obsession.

Mitchell’s work is aimed at taking performance beyond the gallery space – collecting remnants of these endurance marathons or abstractly quotidian rituals in the exhibition space as a strange catalogue of performative possibilities and imaginative wormholes of work and thought.

Mitchell takes on the modernist tropes of Taylorisation and the scientific management of work and extends it to the uncanny and absurd: in all seriousness she sets herself to tasks of an hyper-extended smile, the sawing of a cartoon hole; the log-rolling of a barrel; the counting out of nuts; and the thinking about one person for one minute every day for one year.

She becomes a clock – a human sundial, but she only counts out the perfect working day (9 am – 5 pm) in her 8 hour endurance piece. Thus the artist herself takes on a use-value; in fact takes on the ultimate overarching use-value: use her as a clock every day to put yourself to work.

But what does the clock tell us? Carlo Levi writes in an introduction to Laurence Sterne’s Tristam Shandy:

The clock is Shandy’s first symbol. Under its influence he is conceived and his misfortunes begin, which are one and the same with this emblem of time. Death is hidden in clocks, as Belli said; and the unhappiness of individual life, of this fragment, of this divided, disunited thing, devoid of wholeness: death, which is time, the time of individuation, of separation, the abstract time that rolls toward its end. Tristram Shandy does not want to be born because he does not want to die. Every means and every weapon is valid to save oneself from death and time. If a straight line is the shortest distance between two fated and inevitable points, digressions will lengthen it; and if these digressions become so complex, so tangled and torturous, so rapid as to hide their own tracks, who knows – perhaps death may not find us, perhaps it will lose its way, and perhaps we ourselves can remain concealed in our shifting hiding places.

What Mitchell aims for is a projected desire to go beyond the values of modern customs and modernist mortality, to attempt to step back away from the artificial conventions of society, to make the self-reflexive effort to re-think effort itself.

As the artist says, this process allows her to try to get beyond herself, to touch upon something far greater than what she or any of us can comprehend, something raw and universal. And yet at every turn, her actions and attempts snap her (and us) back into being, and make us painfully aware of our reality, our humanity, and ultimately our failings – but also how we can take them into our own hands.