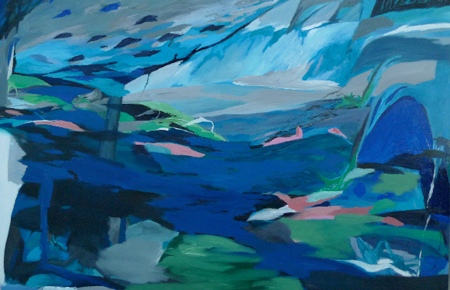 AmberWallis’ Dark Gully/Psychic War builds on themes that emerged while she undertook residencies in NewYork, Montreal and Paris in 2009 on the Brett Whiteley Traveling Art Scholarship, and reflects her current sense of isolation living at Dark Gully; an old house nestled in bush above the ocean north of Sydney. The impetus to create was often associated with the unspoken communication and tension between two people, a Psychic War.
Wallis’ works have featured in numerous exhibitions and publications in Australia, Canada and the USA.Wallis completed a Bachelor of Arts inVisual Photomedia at the Canberra School of Art, ACT and participated in an exchange program with Emily Carr Institute of Art and Design in Canada in 2002. She completed her Master of Visual Arts at the Victorian College of the Arts, Melbourne in 2008 and was the winner of the tenth Brett Whiteley Travelling Art Scholarship in 2008. During her scholarship she worked from studios at ISCP, New York, Redbird Studios, Montreal and completed a residency at the Cite Internationale des Arts, Paris. Wallis was also resident artist at the Canberra School of Art in 2009. She currently lives and works in Palm Beach, NSW.

Out the back of Norman Lindsay's Place,