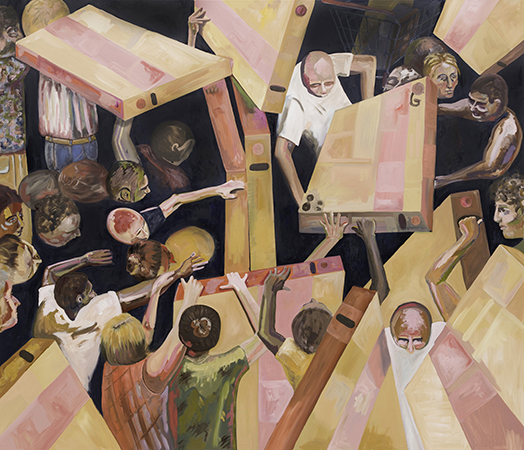 Being part of a crowd is a divisive experience. A mosh pit can elicit feelings of euphoria, or claustrophobia. Some get a thrill shopping the end of season sale, others can’t imagine anything worse. Group fitness activities can be a motivating, or humiliating, prospect. Many get a sense of belonging from cheering for their team, but there are those for whom a sports stadium remains a foreign land. Crowds are universal and timeless, however Amber Boardman’s ‘Crowd Scenes’ speak to the preoccupations of contemporary capitalist society. These crowds are driven by consumerism, whether entertainment, trends, or products. Boardman’s subjects wear neutral expressions, leaving space for the viewer to place themselves in the scene.

This exhibition finds Boardman working on a much larger scale than is typical for the artist, expanding the canvas and in turn expanding her subject matter from the individual to groups. Her previous body of work focussed on the pursuit of self-care and femininity in the Instagram age, and Boardman continues this meditation on conformity here when considering the invisible structures which govern crowd behaviours.

Fleshy pink and brown tones dominate the paintings in ‘Crowd Scenes’. These are paintings of bodies in space – pressed together, moving in unison to the beat, erupting simultaneously into cheers, sweating and pushing. This fleshiness extends into other elements of the works, such as skin-coloured cardboard boxes and a pink sunset.

But in 2019, interconnectedness is not only fleshy. Boardman’s crowds extend into infinity. Some faces are defined, others almost featureless. Bodies are painted as abstract patterns which dissipate into their surroundings. Are these crowds physically pressed up against one another or are they disparate voices clamouring to be heard in a sea of virtual noise?

In the painting Sport Shaped Crowd, the sporting field and its occupants have been rendered as abstract forms, reflecting the distance Boardman feels from the world of sport and its fans. The green shape at the centre of the composition could be any sporting field, the crowd surrounding it any crowd. While the grass and distant spectators are rendered in dots and daubs, the figures in the foreground have been reduced to abstracted geometric forms. Heads are circles and rectangles, arms jut out, long and featureless. Though we can’t see the players or the game, we can feel the energy of the crowd – the shimmering of the distant dots and the clamouring limb-shapes in the foreground. The painting vibrates with their excitement and we can hear the roar of the crowd in our minds.

The speckled green turf of the sports field, the spongy charcoal of the gym floor, the distant masses in the crowd all reflect Boardman’s interest in the work of Impressionist painters Vuillard and Bonnard, this dense patterning extending out into the attire of the figures in several works. The potential energy of crowds parallels the potential energy of paint, and Boardman brings the two together in ‘Crowd Scenes’.

As I write this, hundreds of thousands of people have been marching through the streets of a distant city for a number of days. Dressed first in white, then in black, they have harnessed power and visual impact of a large group of people gathering en masse. From the Hajj to the Women’s March, the Big Day Out to the morning commute, crowds are where one can feel a sense of belonging, and can paradoxically lose one’s sense of individuality in the process.