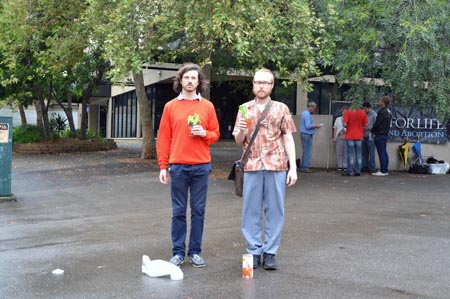 In their practice Gregory and Watts draw from Situationalist tactics, yet instead of hoping to
generate moments of insurrection they work with the mechanics of misplacement. The videos
and paintings in Cocktail Hour follow this logic, where a simple misplaced ritual reveals the
inner workings of place and identity.

This video series represents ludic interventions in the space around us. What Gregory and
Watts do is “make an occasion” of the mundane, quotidian reality of our lives by making and
drinking a cocktail. By arresting the viewer (and themselves) in a certain spot with a certain
cocktail, a matrix of resonances is let loose. The videos are psycho-geographic haikus.
Borrowing from the slapstick tradition of Chaplin and Buster Keaton, they use this parody
and clowning to uncover the politics of visual culture and to engage with the latent power
struggles in our common surroundings.

Manhattan Sydney was made for the Miami Scope festival. If Miami for Sydney-siders is
alligators and retirees, then Sydney is the Opera House. These global images produced
by us for them (think “where the bloody hell are you”) dominate our notion of place. The
global is local. Yet we don’t drink beers with a shrimp on the (Mattel) Barbie, and Sydney
is a gentrified middle class city, the Opera House itself an elite cultural symbol of this. As
artists too the video resonates with the idea of the centre-periphery debate. Realistically we
still wish we were in New York or even better drinking Sydneys in Manhattan. Here Gregory
and Watts do not critique the situation but merely tells it how it is; the artist is not throwing
Molotov cocktails merely drinking one.