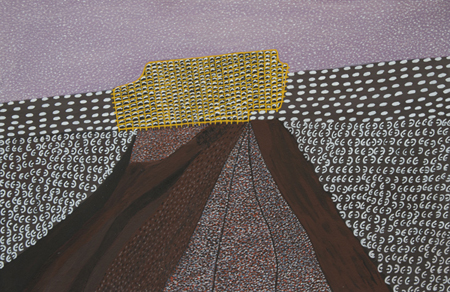 This is Clifton Mack’s second solo show for Chalk Horse Gallery. Mack is an elder of the Yindjibarndi
people whose country is around the Millstream Tablelands in Western Australia’s Pilbara district. It
is this land – its landscape, its natural and built features – that is a consistent in Mack’s work. If
there is a second major theme in this show and in his work generally it is water. Clifton Mack’s
father was the revered Yindjibarndi Rainmaker, Long Mack, who carried the knowledge of water for
his people; in his paintings Mack continues this knowledge and explores it through visual
representation. Knowledge of water, its locations, seasons, and an intimate understanding of the
freshwater-bringing serpent, Warlu, is a basic and fundamental tenet of Yindjibarndi lore.
Mack’s work has recently reached some critical momentum. He was a finalist in last year’s
prestigious Telstra Award and he won the RBS Emerging Art Prize. He is held in the Art Gallery of
WA collection and in Vitali Gallery, Florence, having been selected to visit Italy as part of the
Antica Terra Pulsante exhibition in Florence in 2006. Mack’s work perfectly embodies the power of
Aboriginal contemporary art, which although connected to traditions and Yinjibarndi lore also looks
for new materials, new subjects, and new individual modes of representation. It is a hybrid art
that on one hand speaks to the singularity of the community and place but also responds, even if
sometimes tangentially, to questions of aboriginal self-determination and postcolonial issues.
For example, a consistent motif of Mack’s work is the historic Jarman Island lighthouse. It was
shipped from England as a prefabricated steel kit and reassembled on the spot. It is a marker of
Eurocentric trade, shipping and territorial ownership. It is also now a famous attraction of the
town however, a place for meeting and picnicking. It is unclear in the end where Mack sits in
relation to this building. The lighthouse is malleable again, soft, and is represented in a plastic
acrylic mark that at the same time recalls traditional mark making. Is Mack’s sunset in dialogue
with a western concept of the sublime? The bird feet on the sand, in an “authentic” style, suggest
a life before the lighthouse. Mack re-appropriates this colonial building and undermines its
strategic power.
Similarly Dawson’s Well, although used by the Yinjibarndi people, was actually a well dug by European
settlers for traveling coaches and horseman. In these works the main motif is a substantially
sized rock that marks the spot. The lines coming from the rock represent the road, the railway
and the river bank (again with bird feet). These works talk to a complex relationship between
colonizing infrastructure and its co-option, even in the nineteenth century, of the new, by the
Yinjibarndi people.
The final works are connected more directly to Yinjibarndi lore. Jiirda (The Increasing Site) is an
important ceremonial site where the elders enact or conjure the plants to grow in certain places
for another year. The elders mark the position of the wished for plants ritually through white
chalk. The chalk here is eloquently again transposed into a dry-brush acrylic without any loss of
materiality. The systems of roots and areas of growth are mapped out abstractly. In Ngarndu
Ngurra (Tableland Slabs) Mack represents the slabs of rock found on the Tablelands. Again is Mack
referring to the finding of the tradeable and all-important ochre which is found in the area. Is
there a conflation of acrylic and natural pigment in a confused circuit of traditional and the new?
Mack consistently proclaims the vitality and strength of the contemporary Yinjabarndi people. He
explores their land, history and living culture through paint. The paintings themselves stylistically
look both forward and back. 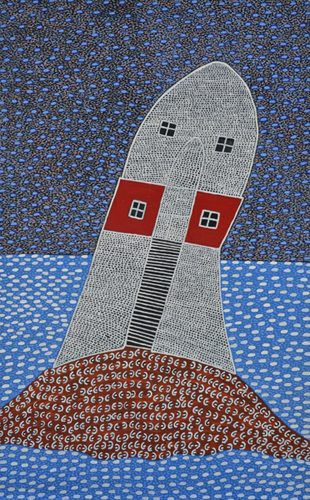 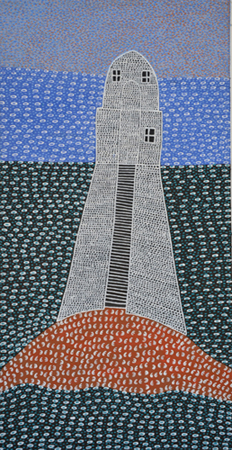 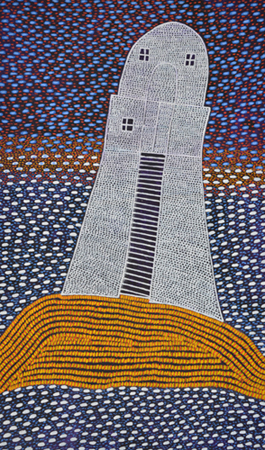 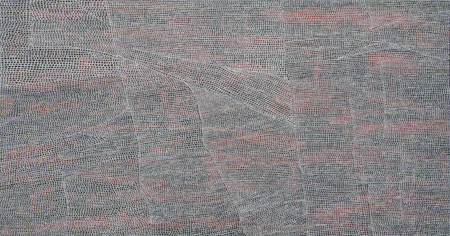 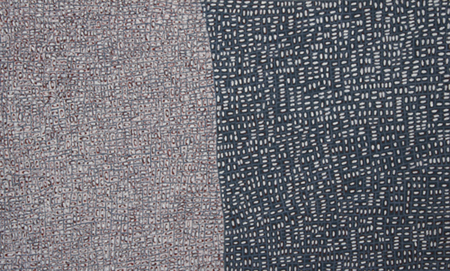