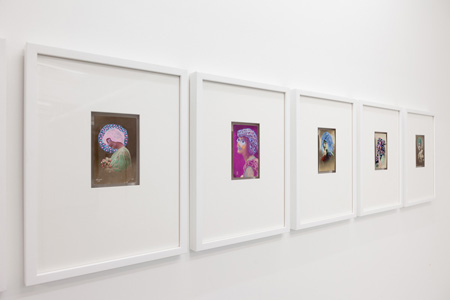 Marynowsky’s Brain Rain continues to explore women and beauty in a surreal and Symbolist manner. There are a parallels in this show to her last show at Chalk Horse ‘Venus of Venus’. An aspect of Marynowsky’s work that I neglected in the last catalogue and which I think characterizes this recent show more directly is the theme of magic and women.

The images that populate Marynowsky’s work always seem to emanate from the minds of the portraits displayed in her postcards. They float around the head like a dream or emanation – the internal and potentially monstrous part of the soul that people are hiding. In the last series Marynowsky quite bravely I feel confronted the superegoic insistencies of motherhood where a mother becomes a monstrous bearer of (all) life and a violent protector (think Louise Bourgeoise’s spider-like Maman or the ‘mother’ in Aliens).

I think some other demons are being exorcised in this show. The approach runs the gamut of serious to the funny. We must all confront at sometime our superegoic guilt and exhortations to perfection. I say the superego here because I don’t think Marynowsky’s animals actually represent animality or bestial drives. There is something in the textual language of a postcard, or the way that they are so lovingly rendered in watercolour that still suggests reason and social communication. An artist that Marynowsky has been looking at recently is George Condo, and like Louise Bourgeois, we are again playing in a Kafkaesque way in the debasement of father figures (a playing through superegoic injunctions in other words) rather than merely animal drives. That is why Condo famously paints a clownish Queen Elizabeth.

The symbolic inscription on our life that is passed down from our fathers and mothers, from our ancestral ghosts is at issue in this exhibition. The postcards have been framed double sided this time so that the writing and places can be more easily read and the connections drawn out. Marynowsky herself is a mix of Ukrainian, English and Australian and she also comments on how other cultures have influenced her life. The postcards have been collected over 15 years and come from all around the world; they all carry their own little histories and have a hidden story that we can only glimpse. Marynowsky’s work is based on this failure, it highlights the impossibility of fully following the threads.

What is at stake in Marynowksy’s work is a wholesale retelling of the tropes of evil and fantastical women, but after feminism. The witch, the sorceress, the siren, the earth goddess, the sphinx, are all part of the Symbolist repertorie. In the 1890s however they were a response to an anxiety of modernity: the new woman. The works actually manifest a general societal castration anxiety (I have always loved the fact that von Struck and his snake draped witches were some of Hitler’s favourite works). The idea was that by painting women in this way that they would be able to inoculate themselves and the viewer from the threat (when it appeared).

Here though the images are more personal. The spider for example, in Red Back, refers to an experience when Marynowsky was bitten and the venom slowly took over her body. The images seem to me always a self-portrait, dealing with psychological stresses and dreams. Perhaps that is what is hopeful about the work, why they seem in the end so loving and “monstrous cute” (a new term coming out of Japanese anime). The images are intense and so intimately hers; but she freely shares these worries, now imagined in paint, which means that she is no longer scared by them. They have been exorcised.